We get a small commission from any books sold.
All Bitmap Books
Written by
Rob Michaud — February 16, 2004

There is nothing more frustrating to a television addict than the end of the current season, and nothing more exhilarating than seeing those cliffhangers resolved a few months later. We all wondered who shot J.R., who shot Mr. Burns, and still sit with bated breath wondering which kid is going to finally snap and shoot Barney. And now adventure gamers can feel that same frustration and exhilaration, with a few great puzzles to boot.

AGON: The Lapland Episode is the second of fourteen planned chapters in the AGON series from Private Moon games. Each chapter can be completed in four to six hours and costs around $10 – about the price of a decent budget game. You play the game as professor Samuel Hunt, a researcher for the British Museum in the beginning of the 1900s. Given a tip from an anonymous letter about an ancient game, Samuel sets off across the world to gain clues as to the location of AGON, the ultimate board game. The second episode concerns Samuel’s trip to Lapland in search of the second clue to the final location of AGON. And, as with the first episode, no one seems too happy to help him along his path, as they all have liquor to drink, complicated machinery to maintain, and keys to lose.

The graphics in AGON are wonderful, and share all the good and bad points of the first game. Backgrounds are beautiful and locations feel as though they are part of a lived in world. Particle and lighting effects, already well done in the first chapter, have been made even better here, and the snow and fire effects are a sight to see. Cut-scenes have also gotten better, and the synching and animation in conversation looks much more lifelike than in the first chapter. 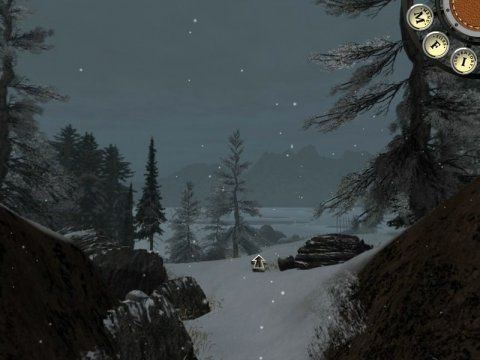 But, as with the first episode, the locations themselves can sometimes be too dark to properly see what you should to be looking for. And with such a cluttered environment, this means that you will sometimes be left searching for items that are right in front of your face. So be sure to turn up the brightness on your monitor and look carefully in locations so you don’t miss any vital clues.

Music is one of the things that the original AGON did right, and it’s still amazing here in Lapland. The best part about the music is that it stays where it should – the background. Like a great movie, the music only becomes dominant when it needs to. Sound effects are serviceable, and get the job done, but nothing terribly impressive. But the voices, while there aren’t many, are great as usual. I said it in my last review, and I’ll say it again: if you have English characters in your game, hire English voice actors. Bravo to Private Moon for realizing this.

But for all the graphical beauty, the game itself seems to have taken a turn downhill. I can forgive the gear and lever puzzles, as they were an integral part of the original game. But a forest maze in a current adventure game is uncalled for, especially in a game that is only supposed to last four hours to begin with. 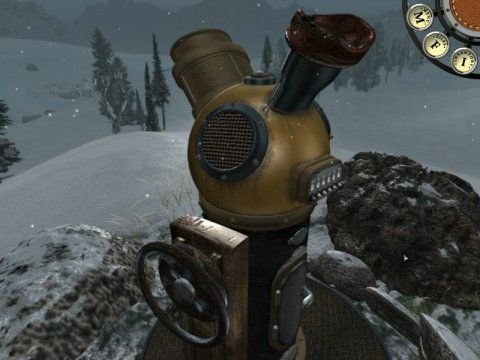 Puzzles consist of finding clues by manipulating gears and levers, with a crash course in Morse code along the way. But with the exception of the book on Morse code previously mentioned, gone are the unrelated books and red herrings that made the first game so much fun to explore. The game feels very linear, and comes across as a hand-holding experience until the maze near the end.

As with the first chapter, AGON’s navigation is handled from a first person perspective similar to Myst. Samuel can rotate around a fixed point, as well as look up and down. When an item can be used or picked up, the icon will change into a hand or gear. When Samuel can move to a new location, an arrow will appear pointing to the area. Some people have no problems with this kind of navigation, and I didn’t really mind it in the first game due to the story pulling me in so well. But navigating a maze with the navigation system is annoying, and the navigation ends up being much more distracting in this chapter.

One good thing that I can say is that Private Moon does listen to its customers, and are actively trying to make a game that everyone will want to play. The biggest criticism of the first game was the fact that your serial code for the game would only work on the computer you first installed it on. But Private Moon has taken this to heart, and now games can be installed on more than one computer, and are now self-contained episodes that can be played in any order, rather than having to restart from the beginning in order to have save functionality intact. The ability to play the board games found at the end of each chapter online with other players will also soon be active, and that will add a nice touch to the story. 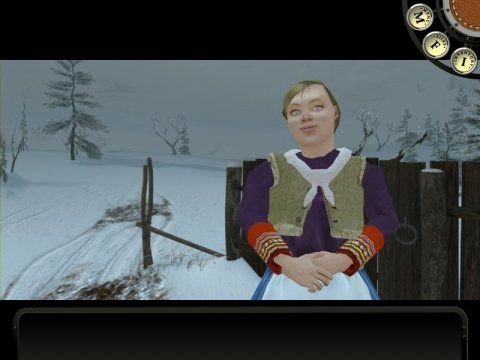 I was a huge fan of the first chapter of AGON, and that made this a really hard review to write. The good news is that with a serialized game, one bad chapter doesn’t make for a bad game. The bad news is that for a company that is depending on sales of each chapter to keep development going, they can’t afford to make a misstep like this very often.

Private Moon is currently slowing down development of each chapter rather than trying to keep up with a two month release schedule, and I am hoping that the extra time on AGON: Pirates of Madagascar will be spent bringing the series back to its roots. That being said, I still can’t wait to see where Samuel is headed next.

(The first two episodes of AGON can be purchased at www.agongame.com.)

While still a game worth playing, Lapland doesn’t move the series forward as much as keep it running in place.

GAME INFO AGON: Adventures in Lapland is an adventure game by Private Moon Studios released in 2003 for Mac and PC. It has a Illustrated realism style and is played in a First-Person perspective. You can download AGON: Adventures in Lapland from: We get a small commission from any game you buy through these links.
The Good:
The Bad:
The Good:
The Bad:

What our readers think of AGON: The Lapland Episode