Review for The Last Express

We get a small commission from any books sold.
Written by
Heidi Fournier — February 27, 2003

The date is July 24, 1914 and the spectre of the First World War looms over Europe. In less than two weeks, Archduke Ferdinand will be murdered and the First World War will begin in earnest. This is the setting into which you enter The Last Express (TLE). Contacted by an old friend, you are asked to meet him on the Orient Express making its run from Paris to Constantinople. When you arrive aboard the train, you find your friend murdered in his compartment.

What do you do next? Well, as I quickly learned, you must act fast. The Last Express does not allow the player the luxury of slowly exploring and calculating their next move it forces you to decide now. The game is timed, so if the right objects aren't found or certain people aren't talked to, you could end up dead or arrested, or just plain lost concerning what is happening on the train. And you don't want to miss anything, because this train is a hot bed of activity crawling with the disenfranchised of Europe, all of whom have hidden agendas and secrets.

Luckily, you shouldn't miss a thing because the game offers the player the ability to literally turn back the clock. Should you unfortunately be killed or make a grievous error, the game can automatically be rewound to another point in the story. You then have 15 to 30 seconds to decide if this is the place that you would like to restart or choose another point to rewind to. Trust me - this proves to be very useful throughout the game. 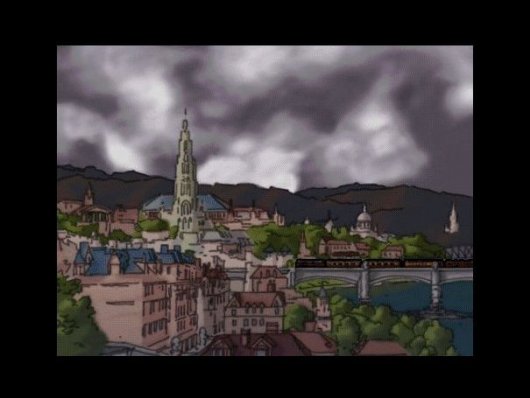 The gameplay itself is also quite different from many adventure games in that it is played in real-time. Due to this fact, all the train's passengers also behave in real-time. They eat dinner at dinnertime, sleep during the night and behave in every other way, as they should. However, this can make for real problems in your sleuthing. Unfortunately, you can't be two places at once and if you miss a conversation between two patrons that should activate a part of the train you haven't been able to access you are going to have to rewind the game. The story is constantly growing with each step you take and every decision can have a number of repercussions, so choose wisely.

As a first-person perspective game, you wander about the limited space of the train eavesdropping, picking up clues, and snooping. Your interaction with the game is completely mouse-driven, so there is no need to learn an assortment of keyboard commands like in Grim Fandango. As an older game, The Last Express unfortunately doesn't come with the 360-degree panning that is standard in current releases; rather the graphics are beautifully rendered 2D slides. In order to recreate the sumptuous luxury of the pre-WW1 Orient Express, Smoking Car Productions studied an abandoned car from the line. By doing this they were able to infuse the game with the features and nuances needed to showcase the famous train line in all its glorious details. Nowhere is this more apparent than in the care and attention paid to the compartment bathrooms! If they spent that much time on a bathroom just imagine how the rest of the game looks. 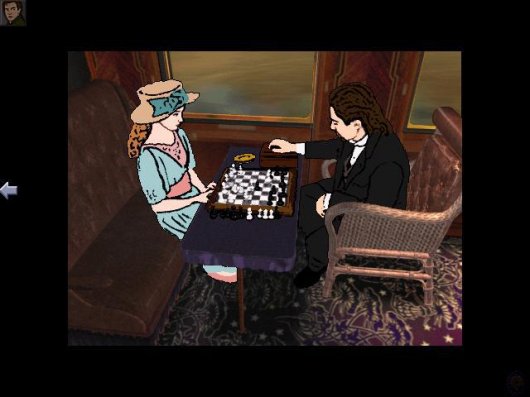 This, however, brings me to one of my few grips about the game: I wasn't blow away by the animation. Using a rotoscope, a device that projects previously shot live action footage onto a drawing board where it is traced, a designer can produce incredibly lifelike drawings. Despite this painstaking process, I have never felt this type of animation was a good idea from the first time I saw it in Ralph Bakshi's adaptation of Lord of the Rings to finding it included in this game. This is not to say that the animation wasn't successful integrated into the game; it was, and it also allows the characters a freedom of movement that animation would not be able to produce on its own. So what is the problem? Using this type of animation causes a jarring sensation when watched against the static backgrounds of the game. The realness of the characters, even though modeled on real people lacks the shading and definition to be truly convincing. These flat characters, with very lifelike movements, combined with the detailed environments make them stand out in an unnatural way that works against the feeling of immersion that is important in an adventure game.

Despite this, I would say that The Last Express is one of the most revolutionary games I have ever played. The simple fact that the story can be taken in a number of directions by a player offers a replay value that is lacking in most adventure games then or now. Chances are no two people will play the same game. The Last Express is also a must have for gamers who love to be sleuths, discovering agendas and secrets, or who enjoy learning about history. If this sounds like you, then this game is a must have, but clear your schedule as it takes between 50 and 60 hours to complete.

The Last Express is available at:

With a long playing time, and loads of intrigue, this game is a sure bet for history buffs and casual fans.

GAME INFO The Last Express is an adventure game by Smoking Car Productions released in 1997 for Mac and PC. It has a Stylized art style, presented in Slideshow and is played in a First-Person perspective.