Mystery of the Mummy review

We get a small commission from any books sold.
All Bitmap Books
Written by
Heidi Fournier — February 13, 2003

Inspired by the adventures of Sherlock Holmes, Mystery of the Mummy has Holmes investigating the disappearance, and assumed death, of a famed Egyptologist. Elizabeth Montcalfe has asked Holmes to check out the Montcalfe Mansion, a Victorian home that doubles as a museum, for clues to her father’s disappearance. You quickly find yourself exploring the house’s rooms and artifacts, where nothing is as elementary as it seems.

Mystery of the Mummy should not be confused with the Sherlock Holmes games put out by Electronic Arts in the mid-90s. Those games were deeply layered and story-driven, while one could easily describe MOTM as Myst on a budget. To be fair, this game retails at slightly more than half of what you will pay for Myst III: Exile, and if taken in that context, you are getting ample value out of this supermodel-thin adventure. There is a market for all sorts of games, just be aware that this game is built for the quick break, rather than the week at home.

The quality of the graphics skew toward grainy. If the player increases filtering in the options menu, the graphics do improve somewhat, but not remarkably. The blurriness of the graphics combined with some of the shadowy environments in the game can transport a player into a pixel-hunting nightmare. You know you are missing a needed object, but often the bleeding of inventory items and graphics will result in multiple probings of explored areas. When compared to the Full Motion Video (FMV) in the game, which is somewhat dark but very good, the game's graphics seem even more limp. I have played games where the graphics are spectacular and the FMV is blasé, but I have never played a game where it works the other way before now. 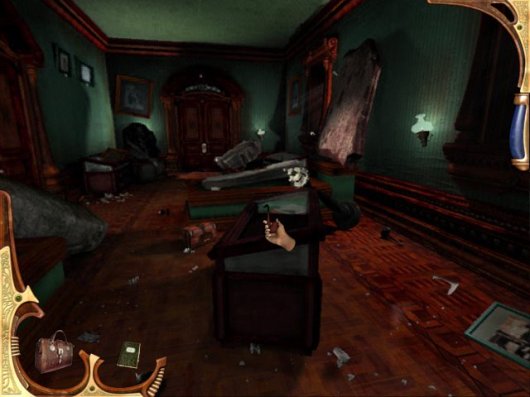 However, I have played many games with dull soundtracks, and I can now add one more to my list. Sadly, the soundtrack sounds like elevator music that was composed on a Yamaha. It is often too up-tempo to build the trepidation or angst the game needs, and other times it is too loud, drowning out the voices of the characters. Though the sound is not looped, it still wears on the nerves, so the obvious answer would be to make it quieter, right? Wrong; the game doesn’t allow you to turn down the volume, only to shut it off. Playing with no music won’t impair your gameplay, though, as everything Holmes says is transcribed on screen for you and then into a notebook in your inventory.

The sad part of playing sans sound is that the voice work in this game is very good. Hey, get that finger out of your ear; you heard me right–the voice acting is well done. Though the English accents of a few of the game’s minor characters don’t sound completely Professor Higgins-approved, the voice work done for Sherlock Holmes is dead on. In a genre where it seems to be part of the design process to have voice actors overemote, MOTM thankfully doesn’t fall victim to this curse.

The curse I fell victim to was the game’s timed sequences, which often lead to Holmes’s death. I was unaware the game had timed sequences, so I hadn’t been saving my game very often. "Poof! You're dead!" can really sour the gaming experience. I assumed this was my fault, being the expert handbook ditcher I am, so I went back to the guide. Nowhere in the manual does it tell the player that there are timed game elements. So beware when you see a nifty blue crystal vial along the left side of your screen; as your time decreases, the crystal will empty. 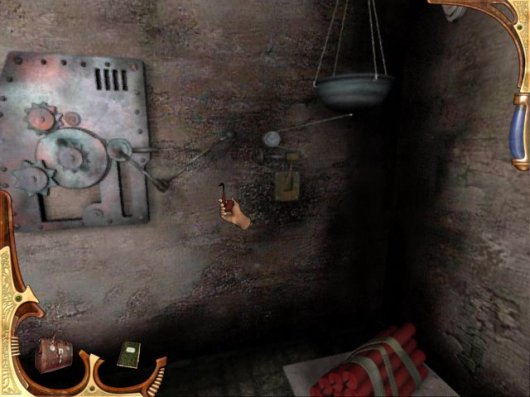 The puzzles in MOTM start out fairly simple and are easily managed, but they do get progressively more difficult as you move through the game. While MOTM does a nice job throughout most of the game of couching obstacles in the game’s environment and providing the player with enough background and clues to master them, this seems to evaporate in a couple of spectacular instances towards the end of the game. Where the so-called Japanese Tile Puzzle fits into Egyptology, I can’t tell you, but it is by far the most illogical and frustrating puzzle in the entire game. It is a shameless inclusion done in hopes of adding heat to the end moments of the game.

The game really does get hot, though, in the sleuthing. The exploration of the museum/home of Lord Montcalfe is a lot of fun. There are tons of rooms to size up and sniff around in and over 100 inventory items to pick up, and of course plenty of mummies to mull over. However, even here the game doles out the clues to key plot points a little too blissfully. “Hmm, a woman’s pin, maybe Elizabeth knows more than she told me?” – you think? This aside, my favourite part of the game is the end sequence, where Holmes details for Watson who the guilty party is. It is really well done, using inter-cutting FMV sequences from throughout the game.

This game is a quick snack, clocking in for me at about 15 hours. Though rough in a few spots, it has some very interesting puzzles and challenges that I really enjoyed. Not being a Sherlockian, much of the charm of playing as Sherlock Holmes was probably lost on me. However, from the sheer number of Sherlock Holmes websites on the web, I don’t think this will be a particular problem for many people. Dig out your trenchcoat and pipe--the game is afoot.

The game is afoot—but maybe not quite with the best foot forward.

What our readers think of Mystery of the Mummy

First of all the game doesn't really feel like a detective game. The actual gameplay consists in exploring a house, trying to find ways to get to new sections of the house. Of course you... Read the review »