When I first heard that a new Syberia game was in the works, I had to check the calendar to make sure it wasn’t April Fools’ Day. After 2017’s disappointing Syberia 3, it seemed unlikely that Kate Walker’s journey would continue. And indeed, a long period of silence followed the initial announcement with no further word. Then suddenly, out of the blue three years later, Koalabs Studio and Microïds delivered a surprise playable prologue for the upcoming Syberia: The World Before, and at first look it may just be a welcome return to form for the series.

Adding a new wrinkle, this latest installment introduces new playable character Dana Roze (pronounced Dawna, Day-na, or Dan-a depending on if you’re talking to her mother, father, or music teacher). In the city of Vaghen, Osterthal in the spring of 1937, Dana is off to the town square for a music recital but is already looking forward to leaving her hometown to continue her musical studies. 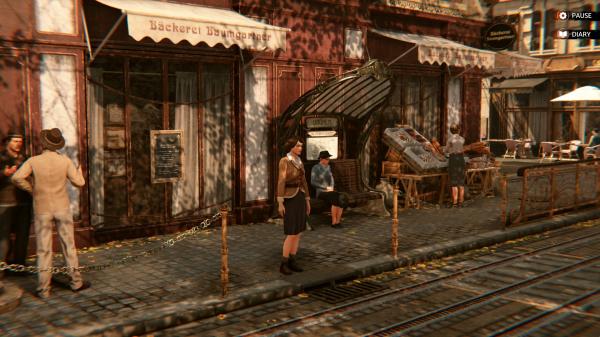 Not much really happens in Dana’s time period besides a majestic, cinematic orchestral performance with Dana on piano accompanied by a group of musically talented automatons that feels like vintage Benoît Sokal from the series debut in Valadilène. Later there are strong indications of racial prejudice towards her family and her people (clearly a Jewish allegory) from a fascist group known as the Brown Shadow. With little time to invest in who Dana is, however, and no particular trajectory to her story other than her preparing to leave for a summer job, that part fell a little flat for me and I have no idea where it might be headed in the rest of the game.

Intercut with Dana’s scenes are what longtime fans of the series will be much more interested in: the fate of Kate Walker. When we last saw Kate at the end of Syberia 3, she had been captured by soldiers and it was implied that she was being returned to a horror house sanitarium in a cliffhanger ending that was as unwelcome at the time as it was abrupt. In her half of The World Before prologue, we find Kate, a year later in winter 2004, not in the sanitarium but a prisoner in a Russian salt mine, forced to perform hard labour in search of ivory. No explanation is offered for how she ended up here, despite the presence of an in-game journal providing sketchy details of Kate’s past from the point of view of private investigator Nic Cantin, who is still trying to track down Kate all these games later.

Every inmate of the salt mines has been divided into a different coloured group, which get assigned to their own work details and are required to prominently display their colours on their person at all times. This accounts for Kate and her girlfriend Katyusha, with whom she shares a cell, having buzzed haircuts dyed dark blue. With sunken eyes, gaunt cheeks, and grime encrusting her face, Kate certainly looks like she’s been through the ringer in the past year. Sharon Mann, reprising her role as Kate, complements the visual change by adding a gruffer, more exhausted quality to the protagonist’s voice. Kate soon receives some devastating news, and due to my longtime affection for the character I found myself legitimately moved by the emotion she expresses, always a sign that the storytellers (and artists) are doing something right. 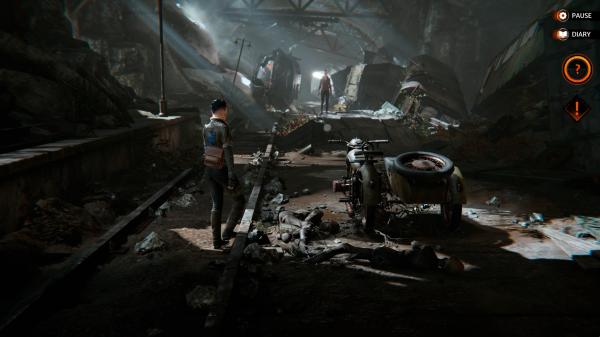 Visually, both the locales and characters are nicely detailed in real-time 3D. The environments so far don’t have quite the same stark beauty as the settings in the first two Syberia games, but they’re much closer than those in Syberia 3. However, characters are a mixed bag. While they look quite good when just standing around, their animations at the moment run the gamut from acceptable to poor, decidedly favouring the latter end of that spectrum. Walk animations in particular are stiff and janky, and Dana’s music recital consists of her vaguely waving her arms in the direction of the piano keys. Lip sync is also hit or miss, with some lines being bang-on while others nowhere near resemble what characters are saying. Hopefully these animation woes can be addressed before the final game releases, as they really do undermine the work put into the character models themselves.

There will need to be some other technical issues ironed out as well. My play time for the prologue came in at two hours, but that was artificially inflated due to bugs. Events swap back and forth between Dana and Kate several times, but when I completed Kate’s first section, the game froze on me, then did it again when trying a replay. And again. Only by turning the graphics settings down from high to medium was I able to proceed. It wasn’t a great first impression, as the prologue also lacks the ability to save at any time, and the autosave always deposited me at the start of Kate’s sequence. Add to that the fact that cutscenes and dialog aren’t skippable, and you can see why my play time was so extended. I’d guess there’s no more than an hour to the demo if it were to be played without glitches.

Those who were put off by the direct control and terrible post-release implementation of point-and-click in Syberia 3 will be pleased to learn that The World Before is mouse-controlled right from the get-go. It offers the ability to left-click to walk and interact with hotspots in the environment, with Kate and Dana moving towards their selected destinations with only subtle changes in the camera angle, rather than wild sweeps or disorienting random switches in direction. Double-clicking will speed either protagonist up, while right-clicking and dragging offers a bit of manual control over the camera, though never panning too far in any direction. Navigation has certainly improved from the last outing!

The challenge level is hard to gauge from a relatively short preview. There are a limited number of hotspots that are highlighted automatically, even from afar, and a handful of inventory items that can be acquired and some of them viewed and rotated in close-up view. Through the entire prologue there was only one sequence that I would classify as much of a puzzle, involving searching the train car of a deceased World War II officer to find a hidden key. It’s not too terribly difficult, but suitable for the early stages of a game. Aside from clicking on hotspots, dialog choices can be chosen in typical point-and-click fashion, and there are a few quasi-Quick Time Events encountered, such as having to click repeatedly to get Kate to pull open a large sliding door.

After the bad taste that Syberia 3 left, I was a bit wary of The World Before. But although there are still some rough edges that will need to be sanded down before the release of the full game next year, there does seem to be enough of that Syberia spark in the characters and their emotions to make me optimistic for the final experience. We don’t yet know much about the newcomer Dana or how her fate will become inextricably linked to Kate’s some 70 years later, but combining Sharon Mann’s vocals with a seemingly renewed focus on Kate’s growth as a character definitely provides reason for enthusiasm. So too does the drastically improved interface and impressive visuals such as the automaton orchestra in Vaghen. Hope springs eternal, but this looks like it may just be the sequel Syberia fans have been waiting for.