continue reading below
»   Home  /  Articles  / Features  / A Look at Graphics: Lighting the Way

In our article series debut last time, we looked at how light can speak volumes about atmosphere, mood, and how they can be used to direct a player's feeling. This time, we'll see how players can be led, quite literally, to particular places simply by using lighting.

Playing id Software's latest instalment in the Doom franchise recently, I've been impressed with how the level designers guide the players through their areas. Green lights shine on ledges and down pathways, showing us exactly where we can jump to and where we need to go in some of the more labyrinthine areas. These stand out wonderfully in a game that's often very red, and remove much of the frustration of not being able to determine where to go next, an issue that many players of older first-person shooters – especially those from the ‘90s – will know all too well.

It's a tool that's useful in adventure games, too. Being unable to see where to go and what to examine or pick up is definitely a problem our genre can suffer from, and using light to combat it is a sensible and effective option. I like to think of it as a form of signposting: if we make certain elements more visible in specific ways, the player will pay more attention to them, even if they're not in the most obvious or accessible locations. 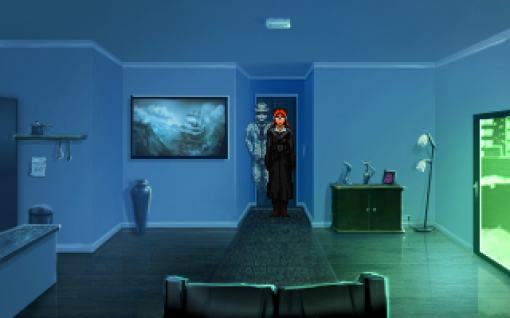 One of the things I sometimes have to deal with is drawing a room exit in a location far to one side, a fair way out of the player's normal field of examination. This scene from Blackwell Epiphany is an example of this. Usually I like to direct the player's attention to the middle of a scene, and just use the edges for framing and bordering. This works like a vignette photograph and makes the edges less conspicuous. Here, however, I have an important scene exit on the right edge of the scene, way off to the side, and so instead I lit it right up, showing players very clearly that this is an important exit. 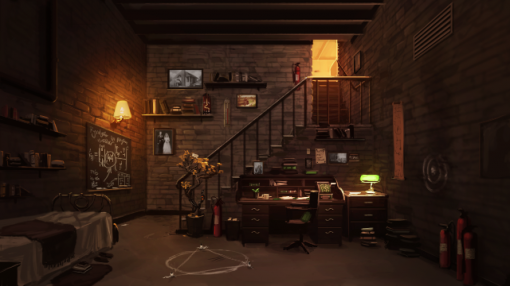 Similarly, with a room exit that's up high or down low, as with this scene from Unavowed with a doorway at the top of a staircase, I often like to depict light coming through in order to show the players that they can walk through here. Not being able to see exactly where I can go is one of my major frustrations when playing an adventure game, and poorly defined room exits are often a major source of the problem, especially in situations like these where a doorway is in an odd position. 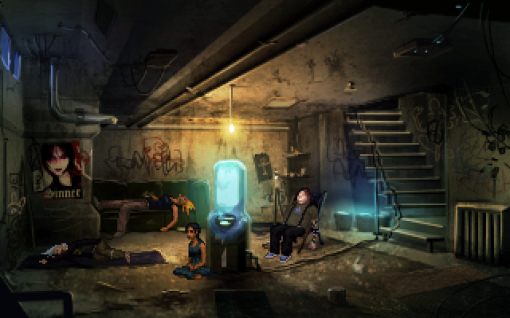 Other than room exits, I also like to use light to show important interactive objects, when appropriate. There's one particularly important object in this scene from Technobabylon, and it's easy to guess which it is, with the blue glow of the terminal's screen shining out from the grimy surroundings, begging the player to investigate it. The characters in this scene need less highlighting: classical rules of composition teaches us that humans are the most interesting element in any scene, and will always draw the viewer's attention unless extremely well hidden, therefore people rarely need highlighting to encourage a player to click on them. Notice also the glowing blue buckets beneath the stairs that draw the eye to this scene exit – a happy accident of the designer's outline that suited our signposting needs quite well. 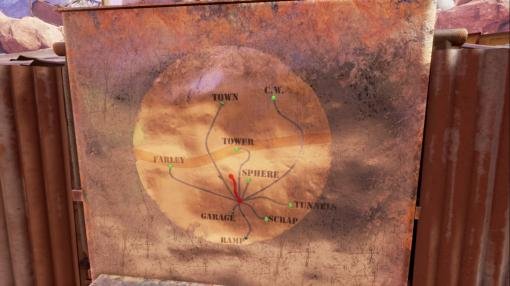 Using lights to lead the player can be the simplest thing, and something I like to look at when I play games, especially because we're used to lights doing this to us in everyday life and don't always pay attention to it. How does the player know which sections of the town have power in this map from Obduction? Simple – they look at which lights are lit, and which lights are not. This is such a common use of lighting that we don't even think about it. Devices all around us use small lights to indicate that they're working, recording, charging, and any number of other functions, and it's absolutely natural to know, instinctively, what this means. 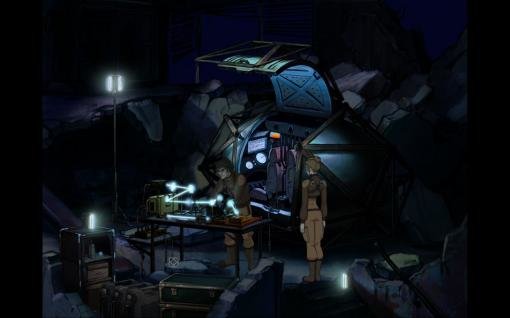 In other cases, just making the device itself glow works perfectly well. We don't need an indicator light to signify that this machine from A New Beginning is running – we can see it from the device itself. This is the most basic and utilitarian use of lights in guiding the player, and doesn't require much technique or theory to pull off. We simply light up the working things, and let the dormant things lay dark.

Other scenes use more interesting and complex approaches to lighting. I love how this scene from Gabriel Knight uses a light above the crystal ball to highlight it, and instantly convey the use of the room. It guides our focus to the most important part of the room, and makes it pop out. Artists often refer to the “thumbnail” of an image – that is, how the image or sketch appears when it's looked at when zoomed right out. The thumbnail from this particular scene leads the eye directly to the table with the crystal ball sitting on it, simply because of how brightly lit and vivid it is. In a dark room it's practically unmissable. Notice, also, that a light has been shone through the curtain to help remind the player where they walked in from. Without this outside light, the exit would be much harder to spot, even though we see Gabriel walk in from this direction. 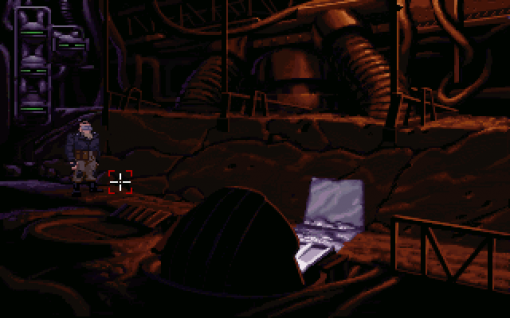 Another great example of leading a player to a particular point, just by using lighting, is this doorway in Full Throttle. The actual doorway itself being hidden from the player, we're nevertheless shown exactly where it is, and our eyes are led to it instantly by seeing the light shining forth from it. When considered as a thumbnail, once again, it's immediately apparent that this is a scene exit, even though we can't see anything at all of the actual doorway. 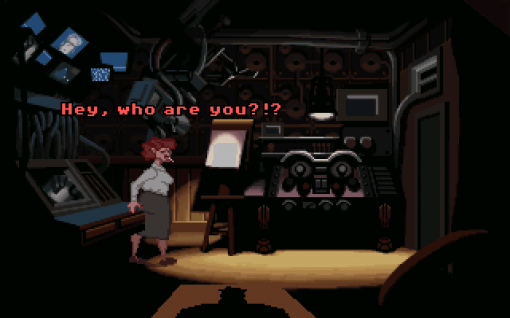 Full Throttle is a particularly good example of using lighting to lead the player's eye and suggest things that we can't actually see – probably because of how dark much of it is. This particular scene has a really neat trick of showing Ben's presence in a scene without actually putting his character in there. All we need to see is a rectangle of light, suggesting an open doorway, and then Ben's silhouette in the middle of it in shadow, and our imagination tells us the rest of the necessary information. Filmmakers love to use shadows to convey details like this, and it works just as well for adventure game cutscenes. 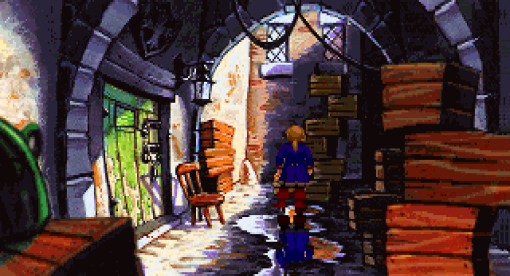 Lighting can also be much more subtle in its guidance, though, and this scene from Monkey Island 2 is a really fun example of a much less obvious implementation. Notice, here, that the ray of light coming down lands squarely on the door – which just so happens to be the most important part of the scene, and the part necessary for the player to be looking at. By “framing” an element with shadows, and then hitting the element itself with a very strong light, it jumps out at us and catches our attention. It doesn't matter how many details are drawn into a scene, if one particular element is lit more brightly than its surroundings, that's where we'll look. 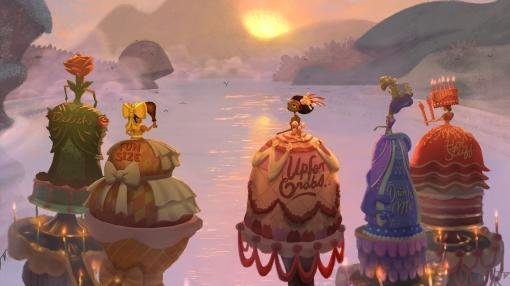 Even in the simplest scenes, those highlights are eye catching. How does an artist ask the player to look off into the distance, such as in this scene from Broken Age where they have an important element that's going to come towards us from that direction? They light it up. The simplest of ideas, again and again, proves useful in guiding our players.

Lighting, like all elements of art and design, is a tool, and one that has a great many uses and applications. The use of these can be distilled and categorised into what I like to think of as the artist's toolbox, and with a sufficient vocabulary, the artist can successfully accomplish anything they wish to – whether it's making a scene feel spooky, asking the player to look at a certain item, or simply telling them where the door is. That's the real role of art in games: beyond looking beautiful and engaging the player in our stories, it must serve a function and facilitate the player's interaction with the world and its inhabitants. 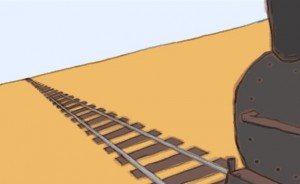 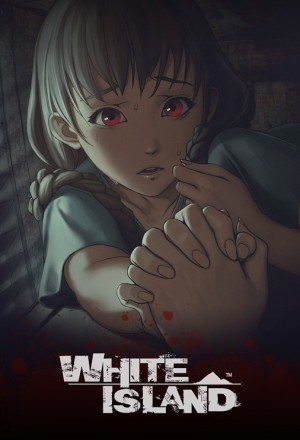