Many adventures encompass some great purpose and a grand voyage. In its own modest way Nordlicht does too, as young Aurora, her father Rupert and her guinea pig Peter embark upon their annual trip to visit the child’s mother, though the game is cryptic about the why, and chooses to focus on the how. Named after the mystical aurora borealis that light up the dark skies of the arctic winter, Aurora starts her journey at home, busily gathering essentials. The trio then set off in their rickety small Viking sailboat across the tempestuous sea for the icy cliffs far north. Along the way, father and daughter bond over their shared love of astronomy and the outdoors, and their languid pace coaxes you too, to pause a moment and reflect on the journey, rather than rush to the destination. The pretty storybook-style art and gentle piano-based music complement the silent conversations about facing one’s fears and appreciating life for its myriad experiences and opportunities, though the overly brief, simplistic gameplay limits Nordlicht to being a delightful but momentary treat.

Crafted by two German students as a school project, Nordlicht is a poignant narrative-driven game of loss, hope and family that can be played by people of all ages. The point-and-click gameplay mostly relies on inventory-based quests to find and use items, except for some easy action sequences to navigate the sailboat amidst the occasional storm. The story unfolds in three chapters: beginning at their house, Aurora and Rupert later pitch an overnight camp in the grim Blackwood forest, and finish off with a steep climb up the wind-whipped, permafrost cliffs of the polar north. Nordlicht, however, chooses not to foray beyond the minimum in terms of gameplay, barely making it to two hours as a result, including the characters’ slow walking speed and a fair bit of back-and-forth, especially in the house.

The game starts with a tutorial about how to move, perform tasks, use the inventory, and turn on the hotspot detector. The first quest involves Aurora exploring her sprawling home to collect miscellaneous items for the trip, ranging from her toothbrush to Rupert’s favourite book. Even later, the tasks are all straightforward throughout, except one where Aurora must illuminate an ancient grotto, which could trip you with its convoluted logic. Finishing each chapter provides a star map, which is used to navigate the next leg of the voyage. Sailing involves quickly clicking buttons in a specified order to counter impediments such as lightning, icebergs and massive waves, lest the aged wooden boat be destroyed. This sounds more action-packed than it is, and should not be a challenge for anyone. On the other hand, a couple of design choices are frustrating: Aurora walks slowly and does not run, and you have to click away repetitive commentary before using any item, as well as negative feedback after each futile interaction attempt. 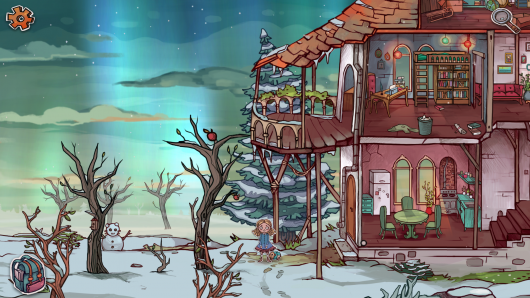 The first and third acts are played as Aurora and the middle one as Rupert, which not only adds some variety but also provides interesting insights into their characters. Both Aurora and Rupert have well-defined personalities. The former, despite her childlike exuberance, is level-headed and responsible, and competently manages the household. She has a strong bond with her quiet, affectionate father, and their interactions as he guides her along the journey are sober and intelligent. Peter the guinea pig is a sounding board for only-child Aurora, an ally she enthusiastically chatters with when by herself. These conversations form the heart of the story, and even without voice acting they elevate the game into a warm, memorable experience. As the tale unfolds, you get the sense that the father-daughter duo have been on their own for some years, and though they are excited about the trip to visit the child’s mother and frequently allude to her while looking through family photos, navigating the boat, stargazing and tending to her favourite flowers, there is an underlying, pervasive sense of melancholy that makes you wonder why she lives elsewhere, far enough away that they can visit only once a year.

The other big win is the pretty children’s storybook-style art, which fills you with a sense of lightness. The colourful, hand-drawn art infuses a sense of whimsy into each scene. Aurora’s dollhouse-like two-storeyed home features a living room, bedrooms, a study, a kitchen, a bathroom, an attic, and a gorgeous first-floor balcony overlooking their apple orchard. The northern lights, omnipresent in the star-studded sky, and sailing by lamplight across the sea, are visual treats, as are the stylishly animated cutscenes that drive the narrative. Golden-haired, saucer-eyed Aurora; slender, studious Rupert, and scarf-wearing Peter are staged as cut-outs like puppets on a stage. 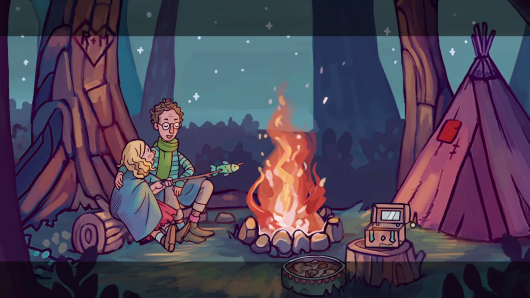 Dialogues are typed out inside light blue speech bubbles, and the charming art carries you past the poorly translated English, sprinkled with typos and grammatical errors. The mellow, piano-based soundtrack is sparingly embellished with ambient effects like the creak of wooden floors when Aurora walks.

In today’s chaotic world, the short and sweet Nordlicht helps us take a step back and focus on the truly important – the people in our lives, patience and kindness, and the spirit to be curious and constructive. Aurora and Rupert are relatable, everyday people navigating a turbulent life, clinging onto their past, yet looking forward to their future, guided by the stars that chart their course. The game would have been better without the drudgeries of the protagonists’ slow walk and repetitive feedback, and it is a bit too light on quests and puzzles for those looking for an activity-packed adventure. It is, however, a lovely way to spend a couple of hours with family on a cosy winter’s day.

Nordlicht is a heart-warming tale of young girl and her father as they embark upon their annual sea voyage to the icy polar north, buoyed past its somewhat shallow gameplay by its lovely, hand-crafted art and soulful narrative.

GAME INFO Nordlicht is an adventure game by illius released in 2019 for Android, Linux, Mac, PC and Switch. It has a Stylized art style, presented in 2D or 2.5D and is played in a Third-Person perspective.

What our readers think of Nordlicht