Along with being an adventure gaming enthusiast, I love cartoons. I suspect this is the case for many of you as well. Because of my adoration for these two things, I was immediately drawn to Just Take Your Left, a hand-drawn 2D point-and-click graphic adventure by Mehrdad Rezaei. And it’s perhaps because of this fondness for cartoons and adventures that I feel rather forgiving of this charming little game, as in truth there's quite a bit to forgive.

Let's start out with what this game does well: the animation. Oh boy, does it do animation well. You control an unnamed man who appears to be a detective of some sort, so I’ll refer to him as such from here on. The Detective is so lovingly and carefully hand-animated frame by frame that each action he takes – guided by you, the player – looks like a piece of animated art that could hang with the likes of Chuck Jones or Max Fleischer. The motions are fluid, the character expressions are evocative, and the absurd cartoon physics are like something right out of the Tex Avery playbook.

Our hapless Detective is tasked with retrieving a diamond from an old mansion for some reason – the “why” doesn't much matter. After a humorous series of cut scenes of the protagonist’s trials and setbacks along the way, you find yourself at the house. Upon entering, however, you find it to be inhabited by ghosts of all shapes and sizes, ranging from those that appear to be noting more than dudes with sheets over their heads to some truly creepy-looking creatures. Most importantly, you are soon introduced to your main antagonist: a rascally little mouse who seems intent on leading you astray any way it can: switching signs, cutting ropes, locking doors... It's willing to go as far as murdering you to keep you away from the gem you seek. 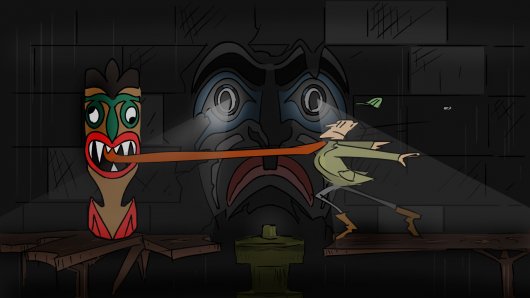 And that's the whole story. You're looking for a diamond, avoiding ghosts, and matching wits with a mouse. It's a simple premise, but it’s cute and funny and totally works for either a goofy madcap cartoon or a graphic adventure game. In each of the thirty-odd rooms you investigate, there is generally some threat or puzzle that requires a combination of inventory items and quick thinking to overcome. You could have to hurriedly find a place to hide before an angry ghost or a fire-breathing statue takes you out, or you may have to use objects you find in unconventional ways to solve a problem. Like any traditional point-and-click, you'll be donning disguises, creating distractions, and using different types of keys in different types of locks, but you'll also be tickling gargoyle noses to make them sneeze. The game generally proceeds in a linear fashion, with puzzles transporting you pretty quickly to the next room or sequence. There are a few exceptions in which you'll traverse multiple rooms to find items and return to use them where they’re needed, but the more common situation is finding a room, encountering a problem, and trying multiple ideas before figuring it out and moving to the next.

The house is chock full of surprises, so expect to die. A lot. Dying is how you learn in Just Take Your Left, and through dying you become aware of threats so you can prepare before entering the room again. It all happens pretty rapidly, too. There are timed segments such as a room filling dangerously with water, and finding the way to escape may take a few tries, though each try takes only a few seconds at most. In most instances, death leads you to respawn on the same screen or just a handful of seconds back in time. Occasionally, though, the game employs automatic save points that trigger in spots you won't be aware of until you die, which can lead to some aggravating setbacks.

This brings us to the rougher elements of this game. The biggest issue I had is a total lack of feedback, which makes trial and error a real chore. If you use an item with a hotspot it doesn't work with, you either get no response at all or the Detective may wander blindly into whatever situation you were trying to solve and then promptly die. For example, there’s a room in which a fluid of some kind with ... let's say ... interesting consequences if you go near it is dripping onto the floor. This is one of those situations where the last checkpoint was farther back, which meant I had to replay the three-minute sequence leading up to this scene six times, each time trying to use a different inventory item on the puddle and each time watching with increasing levels of desperation as the protagonist said nothing of consequence and instead merely walked mindlessly into it and died. The solution to the puzzle ended up being a bit more complex than I thought, but the complete lack of feedback made learning this an utter headache. Rather than the Detective shaking his head or saying, “That won't work,” or even attempting the desired action and failing, the game behaved as if I hadn't even tried by having him do the exact same thing that would have happened if I clicked the puddle without any item selected. 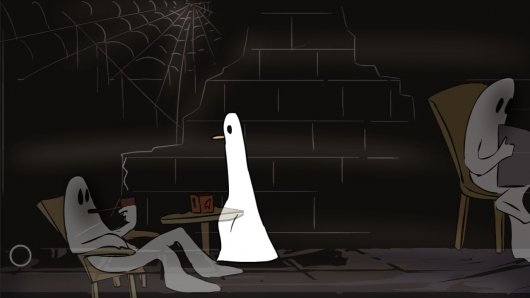 This is also where I encountered perhaps my second biggest issue with this game: bugs. As I had to redo that sequence several times, I began skipping animations (easily done with the Esc key). However, after doing this a few times, the character sprite disappeared completely and wouldn't come back until I closed and relaunched the game. Which is unfortunate since, due to the automatic checkpoints restarting me back a few screens, I was forced to rewatch all those animations I was attempting to skip, and then some. In other situations, inventory items remained even after they were used and left behind in the house (a lever I attached to a machine) or objects needed to solve puzzles were simply not visible on-screen; I only found them due to their hotspots lighting up with the item name when I moved my cursor over the empty spot on the floor. And lastly, the animations, while amazingly drawn, can sometimes happen slightly out of order. You may watch a boulder roll right through you a second before you see the Detective grab a rope to swing out of its way.

The combination of these three things made for a dreadful stew of confusion and frustration at times. I couldn't help but suspect that this game wasn’t fully tested before release. These aren’t the only problems either, as there are other, smaller issues as well. The dialogue is poorly translated and sometimes doesn't make sense. Really the game probably would have been improved by the removal of dialogue altogether. The (non-buggy) animation is so exceptional that, like any Tom and Jerry cartoon, you could understand everything happening without words, reading each character's emotions and motivations just by their expressions. I kept finding myself not wanting better dialogue, but trying to ignore it altogether. Besides some quips and comments here and there, there is only one dialogue tree with two options to choose from. That just isn’t enough to justify the inclusion of dialogue as a whole, especially with the localization issues that occurred as a result.

Yet despite these shortcomings, I enjoyed the goofy but spooky atmosphere of Just Take Your Left, and when the game surprisingly ended about an hour in, I was disappointed. And that’s including all the bugs and restarts – the game itself would only be about fifteen minutes in length without the need to experiment so much. But when it's working properly, spending time in the mansion is a pretty fun experience. The fully instrumental music goes back and forth between light and eerie, which fits the tone perfectly, while the puzzles bounce back and forth between reasonably intuitive and somewhat ludicrous, which also suits a wacky cartoon set in a creepy haunted house. If it leaned too hard one way or the other, I think its impact would have been diminished. 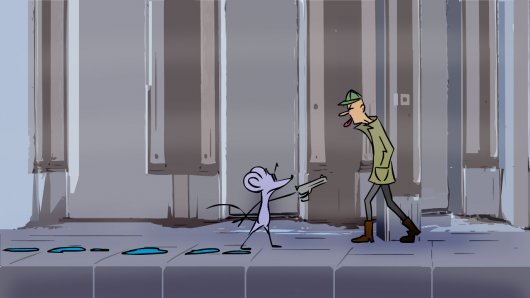 My favorite parts of the game were the few madcap battles of wits between you and the mouse. You end up facing each other on opposite sides of the screen, and you’ll have to think quickly to avoid sudden death. The answers are always fairly logical and rely on you using an inventory item or finding some interactive element in the room that isn't immediately apparent. These sequences move quickly, resetting just moments earlier if you die, making your inevitable demise here basically a non-issue. If there were more of these showdowns, I would have been on Cloud Nine. Really, though, if the game consistently worked as intended overall and offered a better sense of communication to the player, it would have been a triumph exactly as is. At least its issues are all fixable, so I hope the developer is able to address them in a future update.

There’s no question that the real star of Just Take Your Left is the animation. It's a shame, then, that something that looks this good is tied to such glaring flaws that make it seem like an amateur attempt at game design rather than the work of art it could have been. Fortunately the stylish cartoon backgrounds, the enjoyably absurd puzzles, and the slapstick physical humor help balance out the bugs and lack of polish, and the game is definitely worth playing if its visual style seems like something you'd enjoy spending an hour in, even if parts of that hour will inevitably be a bit frustrating. If you appreciate cartoons as much as I do, perhaps as a nice replacement for your next quick fix of Looney Tunes some Saturday morning, consider sitting down to a game of Just Take Your Left instead.

Just Take Your Left is a skillfully animated wacky cartoon adventure that will frustrate as much as it entertains due to its bugs and poor player feedback.

What our readers think of Just Take Your Left