Review for Arise – A Simple Story

Within Whispers: The Fall

No two people experience a moment the same way: you can pass a pair of children playing in the park without sparing them a second thought, while they may cherish the memory long into adulthood. There’s a gap between reality and memory, too, so that the way we perceive an event in retrospect—the impact it has on us, its importance in relation to other moments we’ve lived—is often far removed from the bare facts of what actually occurred. Looking back on our lives, what happened has less weight than the way it made us feel and the people we grew into as a result. Arise – A Simple Story is an examination of the joy, pain and mystery involved in reflecting on one’s life, posing an open question about what it might mean to consider youth through the prism of a lifetime of experience. The controls aren’t perfect, and it hurries a little in crossing the finish line, but it’s a visually beautiful, emotionally rich, philosophical journey from childhood through old age.

The game opens on a group of Neolithic tribespeople solemnly gathering to light an old man’s funeral pyre. Shortly thereafter we join the man himself as he awakens on a snowy peak, with the presumed understanding that he’s died and must now look back over his life before moving on. Each level represents a pivotal moment in his life, from his earliest childhood to his final days, and can only be experienced in order. Rather than depicting literal recreations of his past, however, the landscape, obstacles, and goals in each level correspond to and symbolize the details and emotions that lend that particular memory its significance. An early stage featuring giant-sized flowers and insects, for instance, represents a summer day spent exploring with his childhood sweetheart, while experiencing his first brush with loss means navigating through earthquakes and crumbling terrain as the protagonist’s world quite literally falls apart.

The 3D art style focuses on the broad strokes of its subjects rather than on fine details, with bright colors and soft edges that recall an Impressionist painting brought to life. The old man himself has no visible facial features beyond his snowy beard, but his movements and body language still give a strong sense of who he is. Similar to the way a memory can fade in intensity over the years without losing its power or significance, what things mean is more important here than how they look. The audio also tends toward the abstract, with grunts, gasps, and grumbles standing in for speech; other sounds are mostly ambient, like the rush of a waterfall or the crackling of a fire. The tranquil, contemplative piano score changes to match the mood of a scene, rising to become more grandiose in moments of intense emotion and fading toward the background during more reflective periods; it’s wonderful to listen to, and always effective. 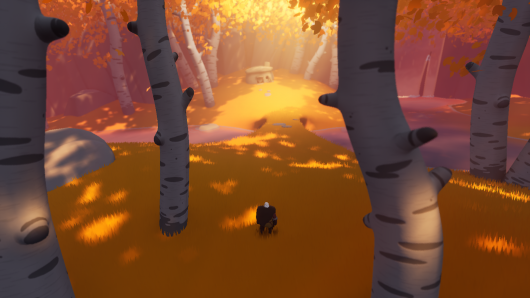 Your ultimate goal in each stage is simply to get from the beginning to the end. Puzzles are all environmental in nature, involving careful observation and consideration of your surroundings before you manipulate them to suit your purposes. You move freely through the environment with the ability to jump or climb as necessary, sometimes grappling across distances or pulling objects closer with a hook and rope. Both keyboard and gamepad controls are supported; I can’t speak to the latter, but the keyboard controls can be frustratingly imprecise, with the old man sometimes leaping in a different direction than the one I’d intended, or wandering off a bridge to his doom when I’d wanted him to move forward. This is compounded by the static camera, which can make depth and distance difficult to judge; there are controls to raise or lower its angle by several degrees, but this rarely proved helpful. (Thankfully, though you can die in Arise, you’re immediately revived to try again.)

There are no items to pick up and no characters present besides the protagonist himself. The people he knew and loved—including his younger self—are represented by posed statues you’ll find as you progress. The past, after all, is fixed: you can observe it from different perspectives, but you can’t change who you were or what transpired. You’re not here to relive these memories, but to understand and make peace with them. Scattered throughout for you to find are glowing orbs that reveal watercolor paintings depicting the memory which inspired the current level; gathering these is optional, as most are hidden off the main path, but the insight they provide into the main character’s story is worth the extra effort.

Integral to the gameplay is a mechanic that allows you to manipulate time, causing it to run backward or forward at varying speeds, or to stand still as necessary. Animals may progress or retreat along their paths, snowbanks and floodwaters rise or fall, and features of the landscape variously grow, shrink, and change position around you. If rocks suddenly fall and block your path, for example, you can rewind just far enough to send them back up again and then freeze them in place until you're safely on the other side. You can only shift things back and forth by several seconds, but that’s all that's ever required, and you can do it over and over as many times as you need. 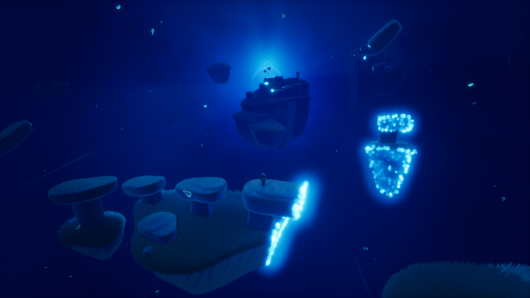 Most of the challenges are based around this feature; frequently you’ll have to adjust the timestream so that points of interest along the path will fall into the right configuration or obstacles shift out of your way. Everything moves at once except for your character, who remains under your control—meaning you’ll have to be strategic about how you arrange each step. In some places this can be as straightforward as increasing the speed and flow of a river and then arresting it so you can jump on a log; in others the task will be more complex, such as carefully controlling the descent of a falling boulder so you can circumnavigate it in midair, or allowing a wildfire to clear a field so you can pass, then sending it back the way it came before it catches up to you. Each obstacle requires that you think creatively about your surroundings, paying as much attention to where something’s been as to where it is now.

Certain levels feature additional mechanics that embody the protagonist’s emotions. In one happy memory, for instance, he is carried along on shimmering gusts of air to simulate the lightness of spirit he felt at the time; this recurs as part of a later, more somber recollection to represent a much different sense of weightlessness. Several darker memories feature shadowy figures with glowing eyes who chase you as the light fades, and a level depicting the aging process sees you forced to run from heat source to heat source or risk freezing to death. Each new element flows naturally from the story around it and helps you better relate to your character’s situation. 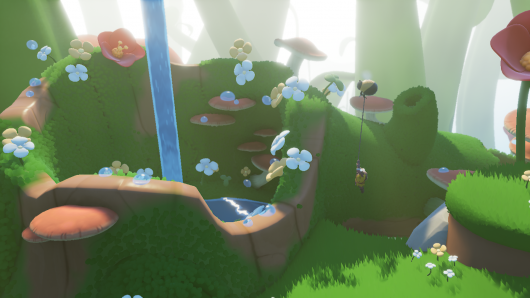 Despite its many successes along the way, the ending of Arise comes a little too early. There are ten levels in all, denoting specific points in the main character’s life, and each conveys his emotions and experiences remarkably well. Nonetheless, we see much less from the back half of his life than we do of his youth, so that we jump straight to his twilight years from what appears to be—at the latest—his early forties. He’s clearly lived a lot between these two levels, and it’s a shame we don’t get to see much of it. As an older man the focus is mostly on the hardships he endures, so that it begins to feel a bit as though we’re jumping from tragedy to tragedy while skipping the quieter (but no less significant) moments in between. The ending still works, but the story doesn’t feel entirely complete, and even a single additional level set during the protagonist’s middle-aged years might have rectified that. That may be part of the point—that there’s always more to say about a person, no matter how much time one takes, or perhaps that even memory is by nature incomplete—but even so, the ten-plus hours we spend with this particular character doesn’t feel like an entirely full accounting of his life.

Arise – A Simple Story manages to strike a difficult balance between engaging one's sense of adventure as a game and addressing complex ideas as a piece of art. You don’t need to follow any particular school of thought about the afterlife to get something from the experience, because it isn’t really about what happens after death. Traveling through one man’s most significant memories as he prepares to cross from one state to another, we come to appreciate the lives that touched his, and the circumstances that made an indelible impression on the course he charted between birth and death. All of us carry such images within us, whether we’re conscious of them or not; a life—any life—is a monument to everyone and everything that helped shape it. It’s natural, when considering mortality, to wonder about the point of it all if a person's thoughts and experiences die with them. Arise doesn’t attempt to answer that question so much as encourage us to discover our own meaning through the precious life experiences of the long journey before us.

Arise – A Simple Story is available at:

Arise uses creative level design, gorgeous visuals and challenging environmental puzzles to explore the length and breadth of a full lifetime. A few presentation issues aside, it’s a moving, thought-provoking experience that tells a complete story with scarcely a word.

GAME INFO Arise – A Simple Story is an adventure game by Piccolo Studio released in 2019 for PC, PlayStation 4 and Xbox One. It has a Stylized art style, presented in Realtime 3D and is played in a Third-Person perspective.