An episodic point-and-click adventure modelled after the genre's classics, Joyfess is the first title by indie developer Sand Wagon Games. Right from the start, its main menu is immediately captivating: a gorgeous hand-drawn scene of the main character in a sticky situation, accompanied by an upbeat soundtrack, sets you in the right mood to want to jump straight into the action. However, though the series debut, Martin’s Secret Recipe, starts off strong, it doesn't always live up to these initial impressions. There are some problems that make it hard to recommend at this point, including some largely mechanical issues and a plot that really doesn’t progress much, but there are some things to like here, too. The gorgeous, colourful artwork and classic-style quest design are the feathers in Joyfess's cap.

That main character is the eponymous Joyfess, a sailor who has become bored with swashbuckling adventures. As our not-so-intrepid-anymore hero talks to his friend Joseph, it’s clear that there is no attempt to hide the fact that this is a title heavily inspired by the Monkey Island games. Unfortunately, we also learn that the subtitles are poorly edited, with frequent grammatical mistakes and the spoken dialogue often failing to match what is written. Some examples are minor, but often words are missing entirely and when added up all of these instances pull you out of the experience. You can turn off the subtitles, and the voice acting is quite good, but they are on by default and hard to ignore when following along.

Like all good sailor types, Joyfess sets off to the tavern on his little Caribbean island, where the tutorial is conducted. The controls are standard fare: left-click interacts with items, right-click examines them. Move the cursor to the top and your inventory appears. The screen is otherwise clutterless, apart from a small menu button in the bottom-left that brings up a slider to adjust various audio settings and an option to manually save your game (there is no autosave available). Unlike some point-and-clicks, when you mouse over interactive objects and people there is no change in cursor icon, but a name or label does appear. Right-clicking items in your inventory is important, as it may unlock additional dialogue options related to the new information gleaned. 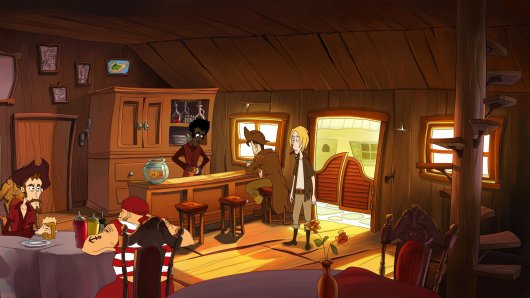 Our hero may be bored of sailing the seas, but he soon has a new adventure in mind: a cooking contest on another nearby island hosted by a famous chef named Martin. After acquiring a recipe needed to beat Martin and win the contest, you’ll need to travel around the island gathering ingredients for a secret recipe. You’re also going to need a way to get there, however, and the only ship available costs money that Joyfess doesn't have. This forces you to pursue other emerging events in order to raise necessary funds, such as helping a tribal chief retrieve his staff. These tasks all intertwine with the overall premise, and it’s a laudable effort in design.

Unfortunately, it isn’t long before the frustrations in gameplay begin. Unless you examine a certain non-prominent item in the tavern, for example, which then opens up a conversation topic with a specific character, you cannot physically leave. It is annoying to be stuck in a single room until you examine something seemingly unimportant to unlock a hidden trigger. While you soon have more freedom to explore, this is representative of numerous instances throughout the game that force you to examine certain objects in order to open up new areas.

You’ll travel around the island via the quick travel map that appears when you exit a central location. Progression relies on backtracking to the same places multiple times to see what has changed, and sometimes Joyfess will make a comment that alludes to this. Once a few locations have been accessed, individuals will start coming and going throughout the scenes—even if they’re not important—and different establishments may be open or shut, giving the world a sense of life. 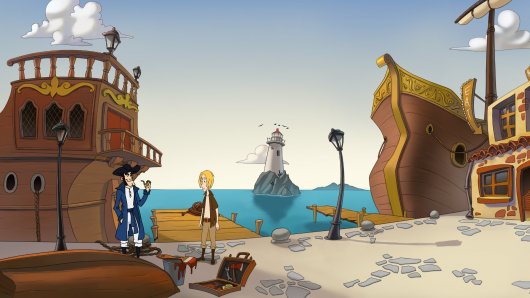 The puzzles are hit and miss. Some are illogical, like having to break open a non-obvious crate to get a used item, which you then swap with an identical item to divert someone’s attention so that you can steal something needed for another quest. The person already turns their back to you, so it isn’t obvious why you need to distract them in the first place, and connecting the aforementioned crate to this situation is pure luck. Other times the puzzles are more intuitive: combine items, talk to someone for clues, or simply use the proper object in the logical place.

Though very traditional in most respects, Joyfess has some obtuse mechanics, such as having to open a recipe book, then click on an ingredient, and then click on people to ask them about each one. They won’t give you the correct response unless you perform these actions in that specific order. This isn’t clearly explained, and can cause frustration. Another example is the need to use a certain food, which can’t actually be done until you identify it as food via a cookbook. It is this sort of over-engineering that holds the gameplay back. The systems here are more complicated than they need to be—straightforward isn’t always a bad thing, and in the case of Joyfess would have made for a more enjoyable experience.

There is also the fact that the characters are stereotypical, and have little depth. Joyfess, for example, feels like a generic smarty-pants who is a little quirky and naïve. Other stereotypical examples include the librarian who is a nerdy bookworm, and the farmer who is a hillbilly. The clichés extend to the representation of the indigenous peoples of the island you are romping around, referred to here as “native indians,” who in turn happen to call you “Pale Face.” Perhaps this is a matter of cultural difference between the Jordan-based game studio and their target audience, but such language comes across as racially insensitive. 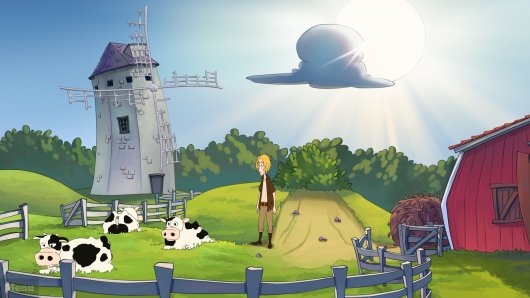 Though the game design is clearly inspired by the LucasArts classics, its high-res art style and humour resemble Daedalic’s Deponia series. Hand-drawn with vivid colours popping off the screen, the graphics are one area where this game shines. Each locale is distinctly unique, from the seaside docks overlooking the distant lighthouse, to the town square dominated by an amusing fish fountain, to the Easter Island-style giant stone faces in the tribal village. The animation is likewise fluid, making the world a pleasure to navigate. You’d never guess this was the work of small indie studio, as Joyfess has the appearance of a title with a much larger budget and team.

Episode one of Joyfess can be compelling at times and wraps up neatly plot-wise, but the story doesn’t really advance all that much over the course of three hours, and won’t likely leave you craving more. According to Sand Wagon’s website, there will be a mini episode at sea before they release the second and final full episode. It will be interesting to see what happens next, but the developers need to address some fundamental issues if they want this series to be a more appealing package overall. There are certainly things to like about this first installment. The art style is charming, the voice acting is good, and the more logical puzzles can be fun to solve. However, a lack of polish in its writing and interface, combined with little depth to its characters and story, leaves plenty of room for improvement. Still, Martin’s Secret Recipe is a decent enough introduction that might appeal to players looking to while away time in a Monkey Island-esque adventure, so long as they aren’t expecting a finished product.

WHERE CAN I DOWNLOAD Joyfess: Episode 1 – Martin’s Secret Recipe

Joyfess is a pleasant series introduction on the surface, with compelling artwork and a nicely designed world, but its lacklustre game mechanics and story delivery make it hard to endorse for now as an unfinished product.

GAME INFO Joyfess: Episode 1 – Martin’s Secret Recipe is an adventure game by Sand Wagon Games released in 2020 for PC. It has a Comic cartoon style, presented in 2D or 2.5D and is played in a Third-Person perspective.