The Fall of April review

It’s a bright, sunny day in lovely Norrköping, Sweden, and private detective Carol Reed is about to embark upon her fourteenth adventure. As The Fall of April begins, Carol’s sometime-romantic-interest Jonas asks her to help his sister’s friend, Andrea Valli. Andrea is suffering from memory loss, which she believes must have been caused by a drug that someone secretly slipped her the previous day. The mother of two young children, Andrea is still recovering from the murder of her eleven-year-old daughter two years earlier. As Carol starts to explore what might have led to the lost memories, she stumbles across a bizarre chain of clues, puzzles, and vengeful messages with a tentative link to the daughter’s unsolved death, but also mysteriously involving a famous 1915 Arctic expedition. There’s much to uncover here, and you will find yourself bustling happily through the engaging locales and stimulating puzzles while the story gradually unfolds.

The investigation focuses initially on Andrea’s overstuffed, heartwarmingly messy house, along with museum exhibits that describe the history of three Swedish explorers who sought to reach the North Pole via hot air balloon. How these are related is eventually revealed, but I spent a great deal of the game sniffing out clues that seemed to obfuscate as much as explain – so much so that I sometimes lost track of how the historical facts were relevant to the present circumstances. That said, the pace of discovery and the opening up of new areas is pleasingly rapid, creating the sensation that you are constantly making important progress. And there are a huge number of locales to scour here, from open meadows with sunlight gleaming through the surrounding trees, to the magnificent cliffs of the Grand Coral Quarry, to beautifully minimalistic dining areas and cozy, colorful living rooms.

As usual, The Fall of April uses a simple point-and-click interface and first-person perspective, with the environments made up of photographs in a slideshow-style presentation. Exiting a location brings up a map where new areas are frequently added. These extremely realistic, often delightful scenes contrast sharply with the game’s occasionally dark, reality-warping themes: the eagerness to hurt others as you have been hurt; the ugliness behind lies told to explain away mistakes; the impractical, even disastrous steps along the path to fame and fortune. Carol will need all her detective skills to understand and break through these incongruities. 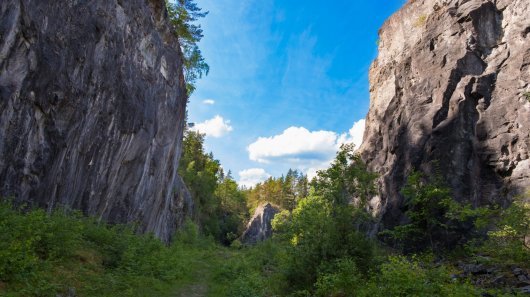 The gravity of your task is occasionally broken up by quirky comedic moments, often involving the series’ familiar, distinctive characters. (Though you can enjoy The Fall of April without playing any of the previous games, you will have a more enriched experience if you’ve followed Carol’s earlier adventures.) Bigge, one of my favorite recurring characters, comes as quite a surprise this time, revealing a novel canvas available for additional tattooing. Stina is once again in a different job (she seems to land a new one every year), and Jonas makes the usual appearance as his handsome, understated self.

New characters related to this particular story also appear, such as Andrea’s tea-sipping brother, a local piano teacher with regrets, and an overly trusting professorial assistant. Developer/writer/photographer/composer Mikael Nyqvist, as in the previous games, makes a cameo appearance, this time as Andrea’s absentee boy-in-the-band husband. Interaction with these personalities is sometimes frustratingly brief – longer dialogs might have made the plot easier to follow. Conversations involve clicking through short notepad-style topics, for which only the responses are voiced. The voice-over cast uses charmingly authentic Swedish accents (the sole exception being Carol’s British-like intonations when she weighs in with commentary). There’s also a late development that features the contemporary habit of sending intimate revelations via cellphone text. The old-fashioned purist in me lamented this practice, only to harangue myself a bit later for being so judgmental. A text is at least something.

Likes its predecessors, The Fall of April contains little animation. Characters are shown in various still poses as you converse with them, and there are also a handful of kaleidoscopic-like effects. As I have played this series, however, the stillness of the surroundings has never bothered me. Carol Reed’s real-world locales are so wide-ranging that the question springs to mind: would I rather explore varied areas without animation, or (as is the case in many contemporary games) find myself in very compact environments that are animated? In this instance, my vote goes to expansiveness and diversity. 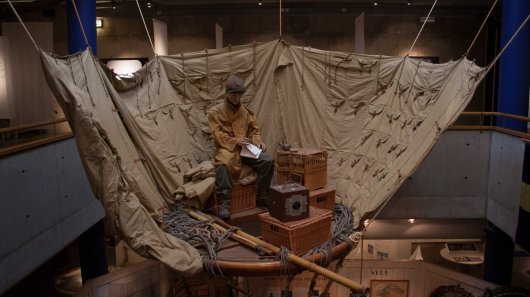 Carol’s latest adventure is supported by a musical score that is both restful and stimulating. Long, drawn-out electrical and choral tones add an almost Zen-like quality. Lovely, mildly dissonant piano tunes echo in the background. Ambient sounds include the chirping of birds, the creaking of doors, the scraping of rocks, and the bubbling of wine in the homemade distiller. Cupboards snap shut, keys click, pages swish and zippers trill in an authentic audio experience.

Of course a myriad of classic puzzles spice up your progress through the game. Many of the challenges involve figuring out how to use sequences of colors or numbers or shapes. Hidden keys, safes, household tools, puzzle boxes and devices that create colored light are frequent elements. Obstacles start out rather easy and surge in difficulty as new locations are added to the map, and it becomes increasingly difficult to know what to do next. 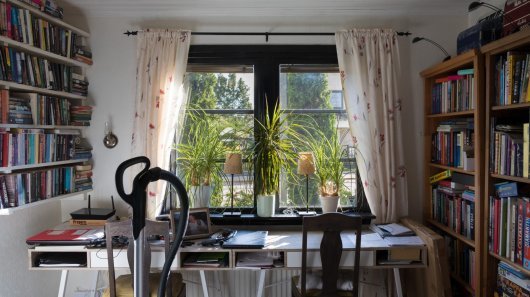 Fortunately, you need not be stuck for long, as The Fall of April contains a hint system that gives you the current objective and, if you keep clicking, more specific instructions for solving the next puzzle. Discovering certain items within the large environments is part of the process – though pressing the space bar highlights hotspots if you wish. Collected objects can be combined in inventory, and spots where items can be used sport a gear cursor when moused over. The game has a handy auto-save feature and apparently unlimited manual save slots, though there is no fear of dying or possible game-overs to require them.

I spent over eight hours leisurely rambling the sumptuous byways, intimate abodes, and engaging historical displays that encompass The Fall of April. The story is a bit slow getting started, and at times I found it difficult to keep all the plot points connected and making sense, but the twisty tale does come together nicely in the end. The puzzles are logical and absorbing, plus there’s a two-layer hint system that can be tapped when necessary to ensure steady progress. There’s nothing particularly new here, but if you’re already a fan, be assured that this fourteenth game in the series (available exclusively at the developer’s website) nicely maintains the reliable Carol Reed tradition. And if you’ve never spent blissful hours sleuthing through the Swedish countryside and offbeat dwelling places with this clever Norrköping detective, now may just be the time to give it a try.

The mystery takes a while to catch up to the intrigue of its captivating Swedish locales, but once The Fall of April rises to the occasion it provides another highly entertaining entry in the Carol Reed series.

GAME INFO The Fall of April is an adventure game by MDNA Games released in 2019 for Mac and PC. It has a Photographic style, presented in Slideshow and is played in a First-Person perspective.

What our readers think of The Fall of April