Preston Sterling and the Legend of Excalibur review

Preston Sterling and the Legend of Excalibur  (2016)

Preston Sterling wants to be Indiana Jones. A swashbuckling ‘Recovery Specialist’ of legendary ancient artefacts, his career is a series of daring temple runs through cavernous ruins and swirling streams, braving trigger-happy marksmen and katana-toting ninjas. He even has his very own Sophia Hapgood to banter with while dismantling dynamite – a sassy ex named Hanna with suitably shady antecedents. The self-explanatory Preston Sterling and the Legend of Excalibur attempts to chronicle his quest to retrieve the Holy Grail of English mythology – King Arthur’s sword – for a client. But though the title indicates a grand adventure, the game is more like an uninspired demo, ending abruptly in about an hour with a disappointing ‘to be continued’.

It is evident from the get-go, even as Sterling is introduced through a snapshot portfolio of his past exploits, that developer Animation Arts is aiming to replicate the charisma of its Lost Horizon series. Though set in contemporary England and France, the game generally limits itself to genre staples like stately mansions laden with antiques and crumbling ruins lit by flickering torches (disrupted by loader screens when transitioning from one area to the next, even on high performance computers). Fortunately the artistic detailing and vibrant palette elevate the otherwise basic 3D art to an illustration-like quality. There isn’t much music either, but here less is more: the up-tempo orchestral theme is used strategically to pep up key segments, while most of the adventure is set against natural ambient sounds like birdsong or whistling wind.

The point of view switches from first-person slideshow during exploration to third-person in action sequences. Navigation of the latter is relatively less tiresome with a gamepad than the mouse, which allows for both finicky point-and-click and a cumbersome but slightly more precise point-and-drag control scheme. The animation is serviceable either way, but the real challenge of the action sequences, such as a long underwater lake dive and running short distances while leaping over deadly obstacles, is to keep up with the flipping camera angles and controls along the way. Failure will restore you automatically to the beginning (or middle checkpoint) of a sequence to try again, with a “skip” option introduced after a few attempts. 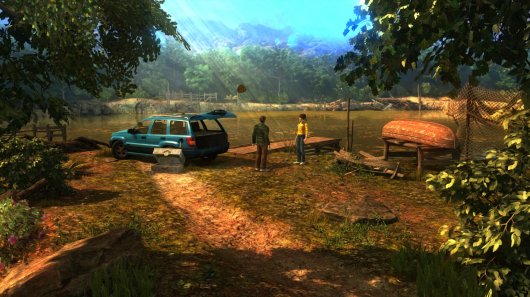 The few item-based puzzles are simple and unimaginative, since at any given time you only have access to two or three scenes and as many interactive objects. Standalone puzzles include the usual fare of pipes and slider minigames (including a combination of the two), as well as a trial-and-error-based adaptation of the ‘Name of God’ floor-tile-crossing from Indiana Jones and the Last Crusade. There is no innovation or even inspiration in any of the activities, all of which add up to a half-hour or so of gameplay.

Most damaging though, is the insipid plot and lackluster script that reduce Sterling to a dime-store doppelgänger of the iconic Indy. He is voiced competently and speaks with a well-articulated English accent, which is great since the goings-on are explained through his monologues. But his edgy art smuggler shtick is unconvincing – he looks, dresses and acts like a college student on a camping trip. Animation Arts has given us some memorable heroes before, like maverick pilot Fenton Paddock and amateur detective duo Nina and Max of the Secret Files series, but despite being handed an eponymous game, Sterling doesn’t qualify for that Hall of Fame. 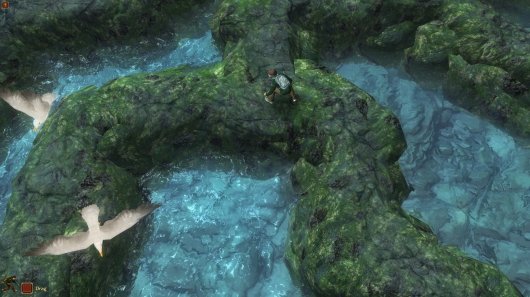 The story itself is straightforward: Sterling has been recruited by an art collector to locate and retrieve the Excalibur. He starts his quest in the archives of Glastonbury Abbey, rumoured to hold many secrets of King Arthur’s lore, then takes his expedition to the fabulously scenic, craggy cliffs of Tintagel in Cornwall. Chased by the henchmen of his competitor Yakamoto and indecorously exported to France, Sterling is fortuitously reunited with former flame Hanna, who harbours her own mercenary agenda. Even then, Sterling is the sole major character and is usually on his own, while Hanna has little to say or do in her cameo other than fend off his one-sided frat-boy flirting.

After some final machinations, including a clumsy Quick Time Event swordfight, the game abruptly announces its indefinite hiatus, leaving all plot lines hanging. It has been over two years since the release of Preston Sterling and the Legend of Excalibur, and there is still no news of the next installment. In this scenario, there is little to recommend about this super-short, uninspired game on its own merit. There is no intrigue in two run-of-the-mill treasure hunters going about their day jobs to find a marketable artefact. The villain is characterised in one sentence, and doesn’t hold a candle to the real enemy – the clunky controls that make even running in a straight line feel like an epic challenge. Though the settings aren’t novel, the art is commendable and the protagonist’s voice acting is decent. But these alone are little consolation in an obviously unfinished game, so unless the next episode appears sometime soon and significantly ups the ante, it would be advisable to leave this stone unturned.

Preston Sterling attempts to follow in the fleet-footed steps of more iconic globetrotting adventurers, but is hobbled by a stunted game that lacks length, depth and complexity, and now appears to have fallen through the cracks without a promised sequel.

GAME INFO Preston Sterling and the Legend of Excalibur is an adventure game by Animation Arts released in 2016 for Android, iPad and PC. It has a Illustrated realism style, presented in Realtime 3D and is played in a perspective. You can download Preston Sterling and the Legend of Excalibur from: We get a small commission from any game you buy through these links.
The Good:
The Bad:
The Good:
The Bad:

Divided into 4 sequences each involving a stock standard puzzle and 1 or 2 action sequences (mazes, jumping and dodging). Your employer has spent half his lifetime looking for the sword, and you find it... Read the review »