Remember way back when you could tell platformers and adventure games apart just by looking? Yeah, me neither. The rise in popularity of side-scrolling puzzle-platformers like Limbo and INSIDE began seriously blurring genre lines, and now games like FAR: The Lone Sails are wiping out any remaining distinctions altogether. This self-described “vehicle adventure game” does include some running and jumping, but most of the heavy lifting is done by your trusty makeshift vessel and there’s never any fear of death, leaving you free to manage resources, solve puzzles, and bask in the bleak but gorgeous post-apocalyptic setting and contemplate how utterly alone you are in the world (which is a whole lot more fun than it may sound).

Like most games of its ilk, FAR thrusts you into the action with no introduction, no instruction whatsoever. A dreary, overcast sky (get used to plenty of that) pans down to a tiny figure in red – ostensibly the titular Lone, though no name is ever mentioned in a game with no words whatsoever except a few ironic leftover billboards (“A Fresh Start”? I think not.) A framed photo of a man seems all that remains of a destroyed treehouse in the middle of a barren field. Presumably, this is the young girl’s father or caregiver, who is now gone along with her home, leaving her the last (known?) person on this inhospitable earth. Think Cormac McCarthy’s The Road without the “happy” ending for the child.

Whatever happened before, it’s clear that you’re on your own and there’s nothing left for you here. So what’s a survivor to do but move. And that is, essentially, the entire premise of FAR. It’s all about movement – to destinations unknown, with no particular goal, just motivated by the certainty that there’s nothing ever worth keeping you where you are. It’s a harsh reality, and depressing if you stop long enough to think about it. But who’s stopping to think? Didn’t you hear me? MOVE!! 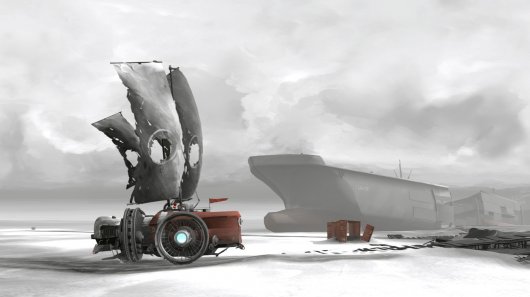 At first all you can do is scurry along the fixed horizontal plane as fast as your tiny little legs can take you, the howling wind and cute little pitter-patter of feet your only accompaniment. Before long, however, you’ll come across a unique Winnebago-sized machine with a few switches and other unlabeled gizmos. A little experimenting accomplished nothing, and I couldn’t help thinking: “five minutes in, and already I’m stuck” – which, come to think of it, is probably about right if I ever WERE alone at the end of the world. But with too much ground to cover on foot (the camera will cleverly pull back if you try, revealing just how hopeless the attempt will be), I kept at it, and suddenly, something changed. I didn’t know how I’d done it, exactly, but an empty spherical chamber was now half-filled with flowing blue liquid. Then pressing the nearby switch revealed that this thing’s on wheels! Time to go RVing, Mad Max-style!

Well, not quite. Or maybe, quite. What was Mel Gibson always scrounging for? Fuel. And soon enough, so was I. This mobile contraption is clearly a blue juice guzzler, because the tank emptied fast, leaving me stuck high and dry, with only a bit of loose detritus lying around to pick up and carry with me, one item at a time. I won’t give up my engineering secrets, but suffice it to say, I did finally work out how to make more fuel using only the limited resources at my disposal. Good thing, too, because you’ll need to keep doing it, all the while managing your rising steam levels lest your craft overheat.

If you’ve seen any screenshots for FAR, it’s also not a spoiler to say that eventually you add some sails to your part-trailer-part-train, relieving some of your consumption problems, though of course only when the wind cooperates. (I must say, these sails are technological marvels, holding steady remarkably well even with giant round holes in the middle.) Yet solve one problem and others arise, as your vehicle will start experiencing sparking mechanical malfunctions and even fire. Figuring out how to resolve these issues is another challenge to overcome, sometimes on the fly as you try to outrace inclement weather outside. 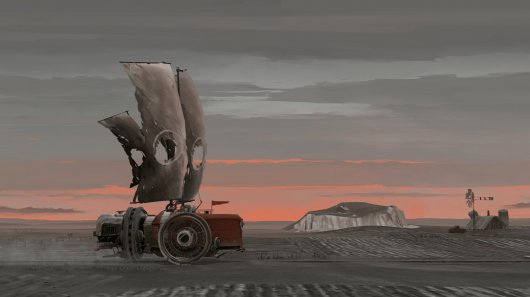 Ah yes, outside. While a cutout cross-section of your steampunk motor home shows you busily managing affairs within, you’re still able to see the various desolate environments passing by in the background. Presented largely in greyscale, with just the occasional touch of colour, the locales are both beautiful and distressing. While not overly detailed, the painterly art style is often breathtaking as time shifts from cloudy day to starlit night, with pinky dawn and deep grey dusk in between. With very few other signs of life, the main external animation stems from the occasional rain, wind, or snowstorm around you. Instead, it’s YOU that’s never still as your patchwork craft progresses ever eastward (or at least, always to the right).

All this artistic loveliness belies the world of utter devastation it depicts. From abandoned shipyards with eerie wrecks to small pockets of quaint homes on a serene hillside (it’s amazing how peaceful things can be when everyone but you is dead or gone); from decrepit woods laced with blood-red waters to geyser-blowing mountains coated with snow, each new location serves only to reinforce how utterly alone you really are. Well, that and inject a few additional challenges.

While your vehicle can steamroll the smallest of blockages in its path, every once in a while you’ll encounter an insurmountable obstacle, usually some kind of massive mechanical construction like a crane, radio tower or land lock – even a hollowed-out submarine! This requires getting out and exploring, then experimenting with the few interactive bits of equipment, whether pressure plates, winches, or other similar devices, all of which are conveniently highlighted by eye-catching colour. Given the dearth of actual possibilities (and your own lack of physical ability beyond jumping, pushing, and carrying useful bits of junk), these challenges generally don’t prove to be particularly difficult, but each offers a nice change of pace from all the vehicle management in between. 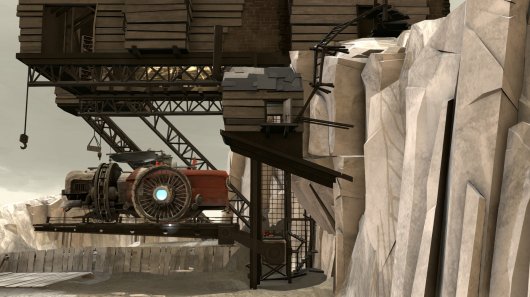 I was expecting a ramp-up of difficulty the further I went along, with additional new mechanics added to shake up the formula, but for the most part FAR seems content to ride out (literally) its same few conceits all the way to the end. That would be a problem in a longer game, though at only about three hours of play time, it really never wears out its welcome here. You do sometimes have to juggle a few interactions under duress, and the odd jump is a hassle because it’s not always clear where you can land, but the challenge really never amounts to a matter of agility. Not only can’t you die, but you can even intentionally plummet from great heights and the protagonist’s skirt will poof with air and float you gently downwards.

Once I became more familiar with the rules of engagement, I actually found the game easier over time, but I was driven (still literally) to press on, eager to find out what – if anything – awaited at the end. And yet, having said that, this is a game that’s very much about the journey and not its destination. Since you don’t even know where you’re going or what might be there when you arrive, you’ll want to take your time to soak up the atmosphere along the way. The prevailing mood can’t be considered comforting – a reality that the pleasant but slightly discordant musical interjections underline at times, denoting something that just isn’t quite right – but it’s often rather peaceful in its solitude. I particularly valued the sailing moments, which do not require constant personal attention, allowing me to head up top and drink in the sights – STILL trying not to think about being the last person left standing.

To that end, it’s impressive how quickly the vehicle itself becomes a central character in this game. It has no A.I. or anything alive; it really is just a rusting mode of reluctant transportation. You never decorate it or make it “home” in any traditional sense. But it’s your constant companion – your ONLY companion, and it’s your lifeline both to survival and further exploration. You need it as much as it needs you. I was surprised at the separation anxiety I began to feel when apart for too long (a feeling the designers cleverly manipulate a few times throughout). Without your vessel, your own life might as well be over too. In a dead world like this, movement is life. 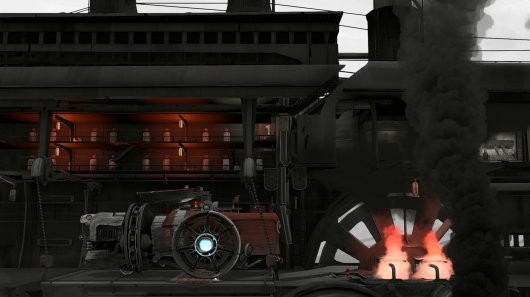 Apart from a few glimpses into the evolution of your car-train-boat-thing, you really don’t learn much more about this world or the girl left behind, which is another common trait among INSIDE-like side-scrollers. I’d have gladly gobbled up any offered lore about how things got this bad, but I’m ultimately okay with filling in all the blanks between the bits of environmental storytelling myself. Sometimes it’s better not knowing and leaving things to the imagination. So be forewarned: go in expecting a linear story that’s neatly tied up with a ribbon at the end, and you’ll be sorely disappointed.

FAR: Lone Sails is not your standard adventure game, to be sure. With no inventory (beyond what you can lug in your tiny arms), no other characters, and no overt “story” being told, I can understand people being fooled about just what to expect. But don’t let its run-and-jump appearances fool you. This is a gentle, richly atmospheric experience that even the most dexterity-deprived player can manage. The challenge is light, even as the game goes on, but there’s always enough to see and do to keep you thoroughly engaged for the few hours it’ll take to complete. So go on, if you’re up for something a little different, set the wheels in motion and give it a spin. Don’t let the opportunity pass you by.

Review copy generously provided to us by GOG.com.

A side-scrolling vehicle adventure with a platformer’s stylish detailing, FAR: Lone Sails is a simple but charming little ride that gradually builds up momentum and never loses its way.

GAME INFO FAR: Lone Sails is an adventure game by Okomotive released in 2018 for Android, iPad, iPhone, Mac, PC, PlayStation 4, Switch and Xbox One. It has a Illustrated realism style, presented in 2D or 2.5D and is played in a Third-Person perspective. You can download FAR: Lone Sails from: We get a small commission from any game you buy through these links.
The Good:
The Bad:
The Good:
The Bad:

What our readers think of FAR: Lone Sails

Too Much About the Journey

The game either needed to abandon its adventure game style or double down far more than it did. The sailing is boring. While there's loads that a person can do to increase efficiency and sail... Read the review »