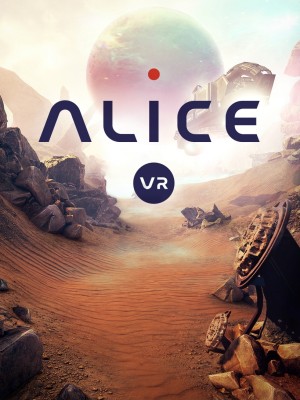 The Gallery: Episode 1 - Call of the Starseed

Space: the final frontier... Well, no, not really. For any seasoned gamer, Alice VR will initially not feel like anything new, which makes sense given that science fiction is one of the most popular genres. In fact, more and more often the same recycled stories are leaving gamers with a feeling of “been there, done that.” Recent attempts at reinventing the space wheel, as it were, have been mixed at best. Now it’s Carbon Studio’s turn to try delivering something unique by reviving something old – in this case the story of Lewis Carroll’s Alice in Wonderland – and creatively integrating it into something new, not only through modern virtual reality mechanics, but also by reminding gamers that the oft-forgotten importance of narrative can still be played with, and indeed, is a vital component of any game. Unfortunately, what they neglected to do was to properly optimize their game's technical elements.

With that said, down the rabbit hole we go…

Disoriented and unsteady, you awaken on a spaceship. A gentle female voice guides you through the passageways, and begins telling the story of why you have been roused. She is “HEART”, your personal A.I. guide and mentor in this adventure. You are Alice, and something has gone very, very wrong. 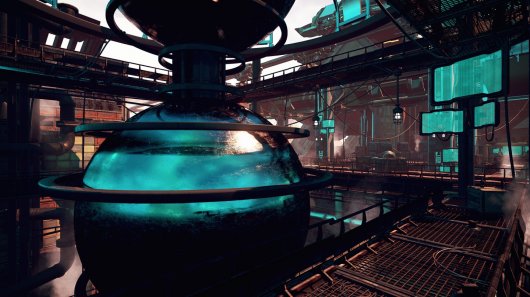 Further into the ship, you learn via friendly information kiosks that you are on a vessel orbiting Speculo (or “Lonely City” as it’s called by the locals), the only planet in the system colonised by humans for its graphene deposits. HEART explains that repeated scans of the planet and the ship show no other signs of life. Curious… Your vessel is in dire need of repairs, which must be completed so you can travel to the surface of Speculo to investigate what went wrong. With the help of HEART and a handy dandy shrink button, you must solve the enigmas of the ship before making your way down to the Lonely City.

Speculo is a harsh land, made of gargantuan rock formations and desert terrain. You watch as your transport ship disappears back into the cosmos. Giant celestial bodies glare at you from the sky as you begin to make your way to the rocky labyrinth that lays before you. Coming upon a pile of small silver objects at the opening of the maze, HEART tells you it is an early version of a C.A.T. (Computer Animated Technobot), but that it is of no importance and you would be best served to ignore it. Being Alice, your curiosity gets the better of you, so you bring the C.A.T. to life and his grin shows just how happy he is you did. As he fades away, he urges you to keep a watchful eye out, as nothing is ever quite what it seems.

And then there, on the wall, a drawing of a White Rabbit appears! Follow the White Rabbit, and the secrets of the labyrinth will be revealed. Challenge after challenge appears along the way, and all the while you must obey the signs urging you to  “eat me, drink me” (figuratively speaking) again and again – which in this case means constantly pushing the buttons that cause you to shrink and grow. As you do, clues begin to emerge about what happened on this world. HEART encourages you to pay no mind to the audiologs that you find scattered everywhere. They tell the increasingly worrying stories of the Lonely City’s people, and your boss/owner, the “Corporation”. What is this mystery, and what does it all mean? 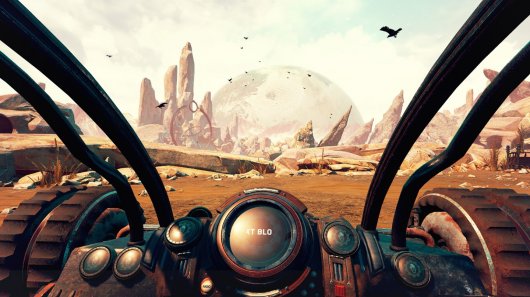 At the end of the maze, C.A.T. reappears. He ponders what the people of this world may be trying to tell you, and urges you to delve deeper into the story. They he leaves you to find a land rover, which allows you to continue traversing this rocky landscape with more style and speed. Yet travel to the mines is still laborious and not without a few more trials thrown your way. The end of your tribulations is met with a field of mushrooms. As you gaze at the expanse of toadstools in front of you, HEART gives you your only instruction: “Look up.” Great White Sharks appear in the sky, lazily swimming through the air as though on their way to a tea party. Large cube towers of what appear to be a kind of black/blue crystal loom on the horizon. Onward you must go.

Finally the opening of the tower looms in front of you. “Wake up Alice,” you hear HEART say. As you venture inside, the desert landscape disappears into a sleek and polished world of mirrors and blackness. What lies beyond, you wonder? 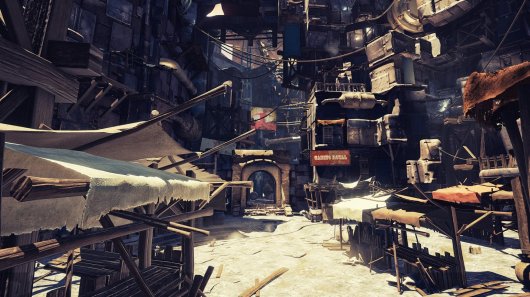 As intriguing as the premise may be, frustration is the most prominent emotion when playing Alice in virtual reality. With the Vive, problems in both gameplay and user interface (UI) pop up almost immediately. For example, when trying to simply skip the production screen at the very beginning, the game crashes. No joke. To say this is a finicky game is my attempt at being kind. This certainly isn’t the last time either, as this game has an ongoing tendency to completely break. On the planet, you will encounter a lack of collision detection as well (i.e., walking through rocks and other environmental objects). In wanting to make sure this wasn’t my own device causing these issues, I played the game on two different PCs and experienced trouble on both. Updates released since launch appear to have eased these technical issues somewhat, but even many months later problems remain.

In VR, the movement controls are extremely tedious. Your direction is dictated by where you happen to be looking, the walking speed is very slow, and there's no teleport option. The only means of movement is to continuously press the ‘up’ direction on the controller trackpad, which makes navigating the world difficult. For instance, moving around a box on the ground requires you to take several physical strides around the room while constantly moving your head in the direction you want to go. Head movement is somewhat sensitive, meaning wherever your head is looking, THERE you will go. Getting stuck is a very common occurrence. There are player movement options in the menu, but after much tweaking I found that they had little to no effect on improving performance. The controls for the land rover are very similar to on foot, with speed the only benefit as they remain very non-intuitive and ill-fitted to the environment. Like the box example, you must be very careful with where your head is facing, as again, getting lodged in a corner is very easy to do and not an easy situation to remedy. 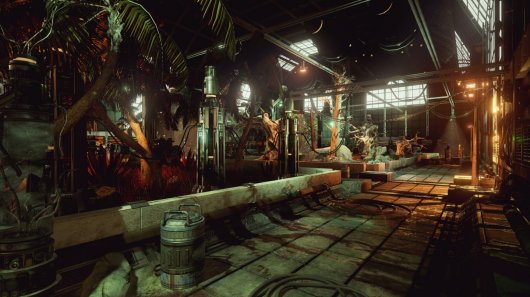 Interaction with the environment is minimal. Picking up and holding an object is tricky, as such items tend to drop on their own and are not easily handled once you do manage to grab hold. This makes the puzzles you must complete a far more laborious task than it is on the standard desktop version. Throwing an object (fortunately an infrequent task mostly limited to the maze area) must also be done via the trackpad, rather than by an accelerometer. Once an item is thrown, it is launched incredible distances, so make sure your aim is spot-on, else you’ll spend much of your time trying to find one single apple again.

For motion sickness-prone players, I would urge extreme caution in playing this game. Alice plays with scale a lot, and will cause a great deal of disorientation and dizziness. I did find that playing while seated helps with most of the physical side-effects, at least, especially while driving.

The lesson here, if you plan to play the game at all, is: PLAY. THIS. ON. DESKTOP. This is the only means of truly enjoying Alice. The traditional controls (basic WASD keys and left mouse-click) prove far more navigable than the VR mode (although I still highly recommend adjusting movement in the options menu) and the pace of the game dramatically quickens by playing it the good old-fashioned way. The glitches I mentioned are also reduced to a noticeable degree, but haven’t been ironed out completely. 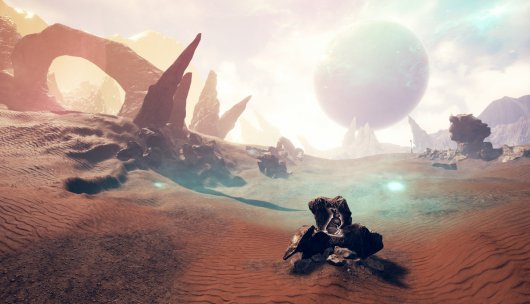 The developers have achieved one thing very well: immersion. The world of Alice is stunning, particularly in the Lonely City. You will find yourself stopping to look around a great deal, which is useful as it can help in discovering the game’s secrets. The scene with the flying sharks is wonderfully surreal, and the attention to detail on the spaceship is just mesmerising. Certain areas are truly fun to explore, but the game fluctuates in how visually polished it is. I encountered some fuzziness, and the textures are riddled with tessellation, the worst ones being on the game menu, pause screen and spaceship. Ultimately, the graphics reflect the persistent technical limitations of the game, but the areas of extreme detail are what will keep you engaged.

One of the few elements that hold no flaws is the sound design. The soundtrack (which plays continuously but changes accordingly to the landscape) is a lovely mix of 1980s synth/sci-fi, and is one of my favourite aspects of the game. The sound effects are authentic too, with special attention paid even to the smallest of elements. Every footstep taken, lever pulled, and button pushed is accurately represented throughout. The voice acting is spot-on as well, particularly from your companion HEART, whose actress did a fantastic job of balancing the robotic tone with traces of a sinister nature lurking beneath her circuit boards.

The challenge of playing Alice comes more from the UI issues than the puzzles themselves being difficult. If you manage to grasp the movement controls, you will find the obstacles very simple to overcome. The resize mechanic employed here, while very well done, is the most commonly used solution. So if something you need is up high, naturally you must discover where the shrink/grow lever is in order to reach it. Moving objects into the correct order (like engine parts) and the occasional light sequence puzzle will also cross your path.

Although much more playable on standard PCs, Alice is a great idea lost amid mountains of technical issues in VR. If you have endless amounts of patience and like Lewis Carroll a whole heck of a lot, this is your game. Otherwise, you probably won’t find it your cup of tea.

GAME INFO Alice VR is an adventure game by Carbon Studio released in 2016 for PC, Oculus Rift and HTC Vive. It has a Illustrated realism style, presented in Realtime 3D and is played in a First-Person perspective. You can download Alice VR from: We get a small commission from any game you buy through these links.
The Good:
The Bad:
The Good:
The Bad:

What our readers think of Alice VR 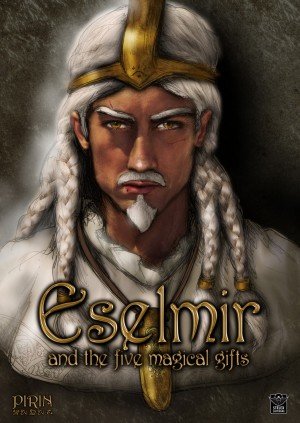