Review for Chronicle of Innsmouth

Although I'm typically not the type of H.P. Lovecraft fan who enjoys mixing the iconic author's work with comedy (even Stuart Gordon's classic Reanimator tends to rub me the wrong way), I found myself genuinely laughing out loud during PsychoDev's enjoyable indie adventure Chronicle of Innsmouth. With the exception of a few misguided attempts to give a little wink-wink, nudge-nudge to the adventure genre (how many Monkey Island references do we really need, anyway?), this LucasArts-style throwback blends the horror maestro's unique sense of the bizarre with some genuinely amusing gameplay, resulting in a retro-tinged experience that's worthy of praise from Lovecraft nerds and point-and-click aficionados alike.

Players assume the role of a young man on a journey through the wilds of Massachusetts to properly celebrate his coming-of-age during the early 20th century. Armed only with a gold pen, a map of the area, and a few bucks in his wallet, our brave hero soon stumbles across tales of a weird coastal town called Innsmouth, a place spoken of in whispers and hushed tones. Overwhelmed with curiosity, fueled in part by a mysterious man who desperately desires to reclaim a handful of the town's ancient relics, the brave and somewhat foolhardy young man sets off for Innsmouth, where its assortment of peculiar residents (and their secrets) await his arrival.

Tucked between our hero's adventures are black-and-white flashbacks featuring private detective Lone Carter, who has been hired to locate a Christian fellow that suddenly went missing from Innsmouth. These segments give those unfamiliar with Lovecraft's classic tale The Shadow Over Innsmouth – which served as inspiration for Chronicle of Innsmouth – some background on the town, its inhabitants, and the secrets surrounding the very strange religion practiced by those who pray to Dagon, lord of the Deep Ones. At first, these sequences seem a bit jarring, especially when you're still getting accustomed to the main protagonist and his exploits, but before long you realize how much these moments add to the overall story. To understand why Innsmouth is so damned creepy, it helps to have some behind-the-scenes info on what is actually taking place there. 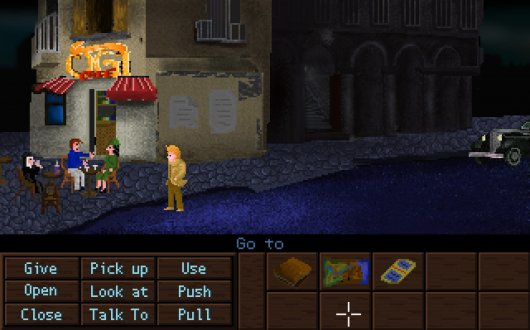 The mystery doesn't really start to come together until you actually arrive in the titular small town, where strange people roam the streets and everyone just seems a little off. While it’s initially unclear why this young man has such a keen interest in this out-of-the-way locale, the truth begins to take shape when he explores the area, including Innsmouth’s pier, the surrounding swamp, and, of course, an enigmatic lighthouse. Our hero will also discover why the town is now infested with bizarre denizens and how Innsmouth’s oddball religion played a hand in transforming the region into something much darker. In essence, what begins as a simple adventure fueled by curiosity becomes a journey of discovery as the protagonist becomes intertwined in the town’s history – and, to some extent, its future.

After exiting the bus and poking around a bit, you'll quickly discover that there's a very good reason for why outsiders don't want to spend too much time talking about Innsmouth. The people here just seem sinister, though it's difficult to put your finger on why, exactly, they don't seem to have our hero's best interest at heart. Is it the bus driver's blunt manner of speaking? The way the guy behind the desk at the inn seems to draw out everything his says? How about the unsettling individuals who are roaming aimlessly around the town in the middle of the night?

And it's these moments that make the game so damned creepy. Although it's not a straightforward adaptation of The Shadow Over Innsmouth, the developers do a good job of capturing that sense of unease and foreboding. Sure, the townsfolk don't seem outwardly evil, but you know, from the black-and-white segments and the main protagonist's encounter with the mysterious man in the library, that there's something evil taking place here. And as the story's secrets slowly begin to take shape, you learn how this naive young man fits into the grand puzzle. Like a good Lovecraft story, Chronicle is equal parts horror and mystery, teasing you with answers and chilling you with what you'll discover along the way. 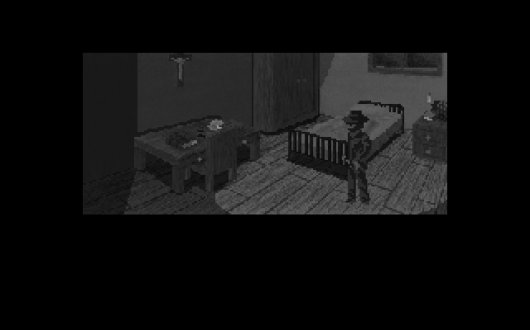 Staying true to the old-school LucasArts style, you'll interact with the world using a handful of verbs located at the bottom of the screen. If you're at all familiar with classic and retro-tinged point-and-click adventure games, then you've seen this SCUMM-like collection of actions plenty of times before. You'll navigate with the aid of hotspot labels, with right-clicks defaulting to the most logical first action on a given object or person, though not necessarily the required one. While the game keeps pixel hunting to a minimum, there are a few moments, particularly in the library, where mouse accuracy counts, especially when it's unclear what you're supposed to do next.

Thankfully, Chronicle of Innsmouth's puzzles aren't too obscure, over-the-top, or impossible to solve. Some of its mysteries require some serious thought to unravel – trying to get a nun to spill some secrets about the town made perfect sense once I'd stumbled across the solution – but in general the game's pretty fair. One aspect I found refreshing was the incorporation of dialogue into these solutions; instead of simply using one inventory item after another to move the story forward, sometimes you'll need to negotiate tricky conversations with the town’s peculiar inhabitants. Again, this took some getting used to, but considering how many item-centric games I've played recently, solving a puzzle by simply navigating through some wonderful dialogue brought a smile to my face. 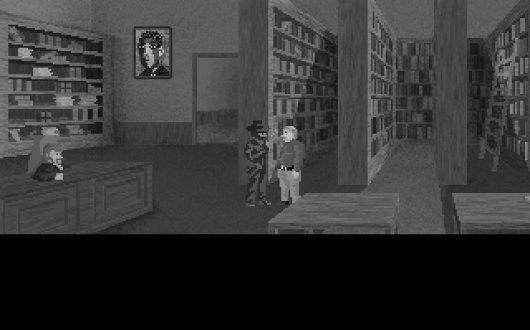 However, a word of warning: There are a few points where the game may kill you – which is certainly not very LucasArts-esque – and sometimes they arrive quite unexpectedly. One moment occurs at the Historical Society during a chat with the curator. To be fair, the game gives you fair warning, and when it tells you something bad will happen, it’s best to proceed with caution if you haven’t recently saved your game. Additionally, various “game over” screens lie in wait once you’ve arrived in Innsmouth, so be sure to save at regular intervals if you don’t want suddenly find yourself losing quite a bit of progress.

Speaking of wonderful dialogue, the writing in Chronicle of Innsmouth truly shines. Rarely do games make me laugh out loud, but this delightfully witty adventure made it occur on more than one occasion. The first such moment came during our hero's journey through a library packed full of strange and noteworthy titles. Perhaps the perpetual ten-year-old living inside my nearly forty-year-old body was holding the reins at the time, but "And Yet It Moves," a book about erectile dysfunction among the elderly, tickled my funny bone. Yes, it's completely sophomoric and woefully juvenile, but you don't see too many jokes of this nature in Lovecraft-related material, so perhaps I was just caught off guard. However, I'm willing to give this joke the benefit of the doubt considering the rest of the game's writing quality. You’ll also encounter a handful of quirky character during your journey to and through Innsmouth, each with their own kooky personality. Of course, some of these folks are more well-rounded than others, but they all have pretty well-developed personas. 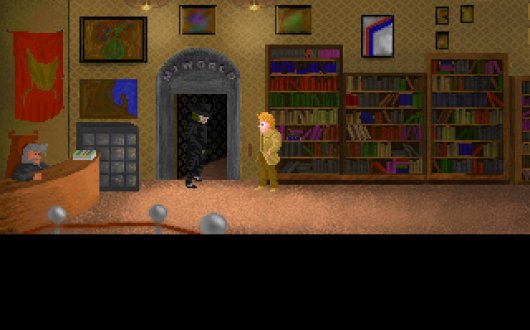 Innsmouth is pretty well-realized conceptually, resembling the town I’d pictured in my head while reading Lovecraft’s work over the years. Sadly, the pixel art style has more in common with some of Sierra On-Line's work than the stuff LucasArts cranked out back in its heyday. The artwork struck me as more in line with the Quest for Glory and Police Quest VGA remakes than, say, The Secret of Monkey Island. While some areas look pretty good, others – particularly scenes that take place outdoors, which primarily unfold during the night – look a little muddy and, at times, indecipherable. The style definitely reflects the type of games created during the early ‘90s, but that's not necessarily a good thing. To top it all off, I can't shake the feeling that the main character was created using the original artwork for Guybrush Threepwood. Even his mannerisms and way of speaking smack of Threepwood, which, in some ways, distracted me from the rest of the game's highlights. Sometimes it's not wise to wear one's influences so boldly on the sleeve.

The soundtrack, on the other hand, remains pretty solid throughout. Granted, the orchestral and folk score is nothing wholly remarkable, and it's doubtful you'll end up humming any of the tunes while you're going about your daily life, but it still helps give these eerie parts of New England a little atmosphere. Unfortunately for those who desperately need voice-over work in their adventure games, this is a text-only experience, which means you'll need to actually read the dialogue – and there is quite a lot of it to read. The effort pays off thanks to the well-written script, but those who have grown accustomed to spoken dialogue might feel somewhat disappointed by its absence.

Minor grievances aside, Chronicle of Innsmouth delivers on what it sets out to accomplish: pay homage to both old-school point-and-click adventures and the master of otherworldly horror, H.P. Lovecraft. Even though it'll take a lot of convincing to make me believe the main character isn't a reskinned version of Guybrush Threepwood, the game's delightful writing, satisfyingly puzzles, and respectful approach to Lovecraftian lore make it easy to forgive the handful of shortcomings over the course of 5-6 hours. It's not the prettiest retro adventure you're likely to encounter these days, but it's clear that developers Umberto Parisi and Amedeo Vasaturo have a very deep love for the genre and understand what made the classics so appealing in the first place. Overall, this is a rewarding experience from start to finish, giving both adventure game aficionados and Lovecraft nerds reason to take another gloomy trip back to the weird world of Innsmouth.

Chronicle of Innsmouth is available at:

Loaded with quirky humor and challenging yet satisfying puzzles, Chronicle of Innsmouth works as both a retro adventure game and a loving tribute to H.P. Lovecraft.

GAME INFO Chronicle of Innsmouth is an adventure game by PsychoDev released in 2017 for PC. It has a Stylized art style, presented in 2D or 2.5D and is played in a Third-Person perspective.