Midnight at the Celestial Palace: Chapter I review

Midnight at the Celestial Palace

A man-child is slumped on the sofa, wearing a bathrobe, surrounded by pizza boxes and resolved never to have an impact on anything whatsoever. An apt description of this reviewer, perhaps, but also how we meet the lead character in Midnight at the Celestial Palace, the debut title from a small development team who should be very proud of what they’ve produced. This first of three planned parts is a triumph – joyful, whimsical and with a charming sense of humour. While by no means ground-breaking, this fantasy adventure will keep you smiling throughout thanks to its diverse cast of wacky characters, colourful locations and fun use of song.

Greg is the protagonist and our first task is to get him something to eat, introducing the simple interface of left-click to walk or interact and right-click to view. When satiated with a less-than-nutritious meal, Greg settles down for the night, though he is quickly disturbed when an otter wearing a periwinkle hat and lavender tunic appears before his eyes. Enter Sir Squiggles, Knight of Dreamania! After establishing that, yes, there is a talking animal in his home, walking on his hind legs, Sir Squiggles announces that he comes from a magic world. Serving under Princess Exaltia, this furry noblecritter explains that Greg has been selected as a champion to banish Dreamania from doom.

It’s all a bit fantasy cliché, right? The premise certainly is, with an unwilling person recruited to save an endangered place from unspecified evil, along with some of the wider plot points. But it’s the journey that makes this particular adventure so interesting. Upon arrival in Dreamania, the duo discovers that their path to the castle is blocked by a massive hole in the ground; further investigation reveals that the stars in the sky are disappearing too. Other mysteries crop up as you venture around looking for a way to report your presence to the Princess, like wanted posters plastered everywhere featuring Squiggles’ face. Not much is solved during this first episode, but there’s clearly something unsavoury brewing. 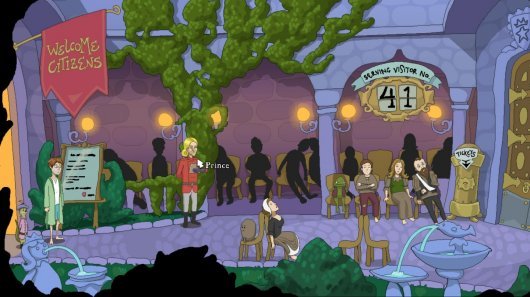 Your main aim, then, is convincing a group of coffee-loving hipster pirates to ditch their beloved dark drink and set sail so that you can hitch a ride. Of course, this being an adventure game, it’s not going to be that simple. Along the way you’ll need to convince a feline flautist to return to her musical partner, overcome a picnic that has turned into bug warfare, and win a heavily unfair golf putting challenge. The puzzles aren’t ever too difficult and are often solved by using something from your small inventory or choosing the right dialogue response, but I thought there was a nice enough challenge to simultaneously keep the pace moving without being too obvious. There is one curveball though, where you must rearrange sheets on an overhead projector, which I found confusing. I eventually solved it through trial and error, but I’m still unsure if I was being dense or if the puzzle was poorly designed.

Greg and Squiggles make for wonderful leads as you roam across Dreamania. You play mostly as the former, though there are a few occasions when you control the latter. Initially a reluctant hero, especially when forced to follow signs toward 'Unfathomable Doom Lane', Greg soon picks up the mantle... or stumbles into it, at least. Amusingly donned in his nightwear throughout, with scruffy hair and stubble, Greg treats everything with a nice combination of bemusement, care and lighthearted scorn. He plays off wonderfully against Squiggles, who is slightly dorky, steadfastly honourable and ever the optimist. Small talking animals are always going to be adorable, but Squiggles’ wheezing whenever he gets panicked earns him extra points.

The rest of the characters you meet are brilliantly odd. There’s a museum attendant who couldn’t give a damn about your presence, the Director of Tectonic Management who happens to be a horse with glasses and a tie, and the witch living in a cottage overrun with black cats. There are some you could probably get away with barely talking to all game, but you should exhaust all dialogue options and inspect everything to enjoy the entertaining family-friendly humour. For example, inspect all the creatures battling over a cake on the hill for many different descriptions like ‘bed bug grenadiers’ and ‘ticked-off ticks’, or check out a statue of a past hero to find out the thing he’s clutching is just his 'fabled blankey'. Everyone across the board is excellently voiced, with dialogue sounding like actual conversation – including all the stutters, pauses and ‘errs’ that entail – which allows the jokes to pop. 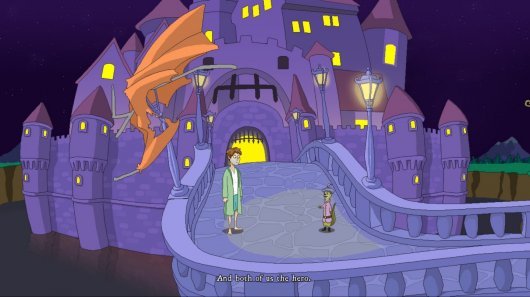 All of this is nicely visualised in a cartoon-like style, with jagged lines lending a slightly retro look. Though fairly simple in design, it’s effective when playing, in part thanks to the variety of characters and locations. Wherever you go, there’s usually curled clouds and a large crescent moon shining down from the glowing purple sky. There are subtle animations too, like the lapping of water or the blowing leaves and rolling mist. Good use of shadow lends depth, and the fact that some scenes scroll as you walk adds some welcome breadth to exploration. The use of colour is particularly great: the witch’s cottage is composed of greens and browns, lending it a musty yet cosy quality, while later underground scenes make strong use of glowing oranges and mysterious blacks.

Perhaps the thing that makes Midnight at the Celestial Palace stand out most is that this is a musical adventure. While much of the game follows traditional conventions, on three occasions the protagonists burst into song. The first time this happened took me by pleasant surprise: the screen darkened, a spotlight shone on Squiggles, and he took his hat off to begin singing in a slow, theatrical style. It’s not blatantly played for laughs, but I couldn’t help beam with the charm of it. The songs are genuinely catchy and the vocal quality is decent; there are a few clunky lines and rhymes, but it’s forgivable. Even better, another neat feature is that when prompted, you can select a dialogue choice to slightly alter the song’s next verse. The tunes are all accessible from the main menu after you’ve finished playing, and it was enjoyable to go back to try out the other options and hear the songs again. 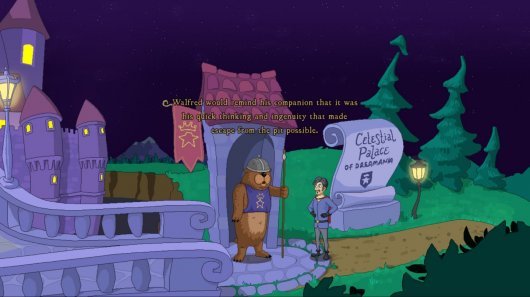 The regular background music and ambient sounds are equally enchanting. As you enter Dreamania, its dark overgrowth looming, the synths slowly play amidst growling animals, but move to a friendlier-looking area and the music chirps with horns and tapping. Later, when you’re atop a hill looking down onto the fantasy land below, keyboard and chimes play a soft rendition of the song you heard earlier. It’s all lovely, and there’s a good variety to ensure you’re never hearing the same thing for too long, with some of it quite reminiscent of early LucasArts classics.

There were multiple times when I thought the game was coming to an end, but then it surprised me and kept going. Clocking in at around four hours, I felt very satisfied when it eventually did conclude, leaving me with many questions that I am still keen to find out the answer to. If the next two episodes in the trilogy can keep up the same quality and entertainment value, then we’re in for a treat. Ultimately, playing Midnight at the Celestial Palace left me feeling uplifted. It’s sweet and fun. While it certainly doesn’t attempt to redefine the genre, it has unique musical elements, a great cast of characters and an enjoyable land to explore. To paraphrase what Greg and Squiggles delightfully sing, adventure fans everywhere should come to Dreamania.

What our readers think of Midnight at the Celestial Palace: Chapter I