Caught up in a wisp of mist, Haven Moon transports you to abandoned islands full of majestic brick-and-stone structures. Strange devices baffle and confound you. Elegantly intimate rooms reveal dazzling water views. Occasionally brief letters appear, written by the “benefactor” who brought you here but who isn’t the least bit eager to show himself. If you manage to solve all the puzzles he has arranged for you, and understand all the devices he has built, he will deliver a treasure – exactly what that is, of course, is carefully hidden. Succeeding is anything but certain, however, as these contrivances are among the most consistently, unapologetically difficult challenges I’ve ever encountered. Still, the land and seascapes are so eye-catching and the aura of secrecy so seductive, that persevering to the tricky final decision at the end is worth the payoff for hardcore puzzle lovers.

The islands you encounter are part of an ocean-capped moon called Seleos. And what a place it is to explore! The brainchild of indie developer Francois Roussel, who was inspired by Myst as a teenager, the game has taken twenty years to create. Tender loving care and creativity have clearly gone into the 3D gameworld, which contains classic architecture, giant metal towers, and interiors full of carved wood, spiral staircases, and claustrophobic marble hallways leading to gloriously sunlit scenery. A Jules Verne steampunk ethos has influenced the shiny brass machinery and ornamentation. The islands come alive with their lapping waves, blowing branches, shifting shadows, and the occasional magnificent rainstorm.

Orchestral music fits the atmosphere perfectly, ranging from nerve-wracking to triumphant, with dramatic growly chords and contemplative, shimmering strings. Ambient sounds include the murmur of waves and howling wind, the repetitive clicks and metallic groans of machinery, and the rumbling of distant thunder. 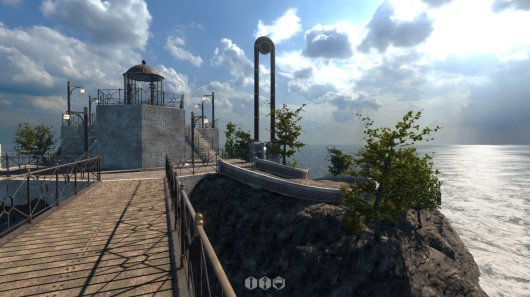 As the AFGNCAAP (Ageless, Faceless, Gender-Neutral, Culturally-Ambiguous Adventure Person) protagonist, you have been brought to this place by a transport device set to identify an alien being worthy of receiving a lavish inheritance. There’s a trace of a backstory here about a brilliant scientist, Ektor Turren, the first person from the planet Menra to travel to Seleos. You gradually learn of his home planet’s fate, and witness evidence of his genius. But you are left wondering about more than you ever manage to learn. Does Ektor plan to return? How did he build all this by himself? If he hired workers, what happened to them?

There is great beauty here and a mystery, but no sense of a culture or a people. Most of the letters (which are unaccompanied by voice-overs) contain technical information, not personal details or a recounting of events. Ektor’s friends, loved ones, rivals – the people in his life aren’t part of the narrative. At times the world feels more like a gorgeous, self-absorbed dream than a living reality. Fortunately, there’s a philosophical challenge involved in the two endings that’s a good cause for contemplation and does personalize the experience somewhat.

Puzzles in Haven Moon are multi-stepped, requiring you to gather information from various sources and observations before putting everything together in order to understand how to operate complicated devices. The difficulty starts out tough and ends up savage. You will need to adjust a telescope correctly, activate a teleporter, figure out how to open doors, use switches, place levers, handles and valves in their correct positions, and enter codes and coordinates. The game uses frequent pixel hunting, made more challenging by the 3D surroundings – you can’t just sweep a cursor around the screen, but instead have to walk all around, approaching anything of interest from different angles and distances, hoping your position will trigger a hotspot. And some hotspots are extremely well hidden. At times I wondered if the game expected me to closely examine every bolt, post, knob and screw. 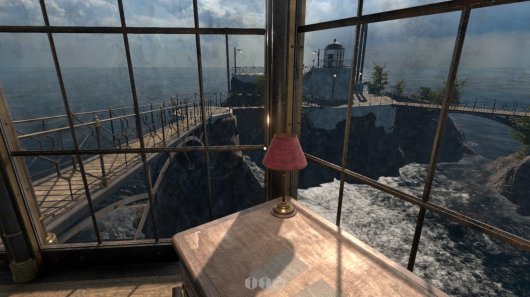 Many puzzles require trial-and-error – not just experimenting to figure out how to operate a device, but having to try different pattern combinations when the game provides only partial clues. Over the past two decades I’ve played dozens of Myst-like games. This is the first time I’ve had to look at a walkthrough for at least one section of every single puzzle sequence. There might have been hints that I missed. But usually after resorting to an internet guide for Haven Moon, my reaction was “how could I have ever figured that bit out?” rather than a forehead-smacking “that was obvious, how did I miss that?” response.

The game is played from a first-person perspective and the interface contains an ever-present cursor that’s tiny and white, but turns green when you find a hotspot. To move, you hold down the left mouse button to go forward or the right mouse button to go backwards, while the arrow keys allow movement in four directions. You can also point-and-click to advance, but this occurs in tiny increments. I found that I often had to lift and drop the mouse while panning, and the forward movement was sometimes so rapid that I would sweep right past the area I was hoping to examine, and then have to backtrack via small clicks. Adjusting the mouse sensitivity didn’t provide any greater control, though reducing the graphics quality from “normal” to “light” did make it easier to steer. A smattering of inventory items represented by translucent icons remains at the bottom of the screen; the objects are used automatically when you arrive at the correct device. 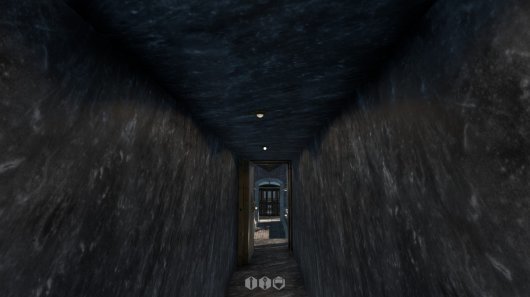 Your progress is maintained using autosave-only. One huge advantage despite this limitation is that the entire gameworld can still be accessed after the finale, so you can go back and make changes to see the alternate ending without having to repeat anything. For the second ending I was concerned because I wasn’t carrying something I thought I needed, but it turned out to be provided at the last minute. Even after seeing both outcomes, you can still wander through the environments – you aren’t shut out by the autosave.

It took me ten hours to complete Haven Moon, with help. I was instantly immersed in this enticing world with its cryptic structures and gadgets. And yes, it inspired memories of Myst and drew me eagerly in. Even after completing the game, I am still returning to wander its byways – something that, over the years, I have only been inspired to do at length with Riven. The two endings gave me plenty to ponder, but though the story tantalizes, it isn’t deep enough to consistently satisfy. And perhaps most importantly, aspects of the convoluted puzzle sequences left me feeling literally clueless. This haven for my eyes and ears was also an unrelenting obstacle course for my brain. Though it often left me frustrated, I know there are puzzle-patient adventure gamers who will relish this unusual combination and just might find themselves elatedly over the moon.

Myst lovers will fall hook, line, and sinker for this island realm, but only the most brilliant or persistent gamers will make it through Haven Moon unassisted.

GAME INFO Haven Moon is an adventure game by François Roussel released in 2016 for Mac, PC and Linux. It has a Illustrated realism style, presented in Realtime 3D and is played in a First-Person perspective. You can download Haven Moon from: We get a small commission from any game you buy through these links.
The Good:
The Bad:
The Good:
The Bad:

What our readers think of Haven Moon