The visual novel subgenre has found a dedicated following among adventure gamers. Several successful series have flourished, each finding its own approach to infusing gameplay with player agency, sometimes via puzzles, other times by offering choices resulting in differing paths through the narrative. Root Letter (or more technically, √ Letter) is the first such game from Japanese developer Kadokawa Games, and is the inaugural title in their planned mystery-themed line-up. While it follows certain genre tropes and offers a fairly lengthy drama with a pleasant aesthetic, however, it doesn’t provide much payoff in the form of either a satisfying story or engaging puzzles.

Within the first few minutes of play, the table is set for what certainly sounds like a thrilling mystery. Players take on the role of Takayuki, a man who had struck up a pen pal friendship as a teenager with Aya Fumino, a mysterious girl living in a distant city. The correspondence served to steward both of them through their final year of high school, confiding in each other to deal with stressful finals, rocky friendships, and uncertain futures. Though Takayuki had started to develop feelings for Aya, as this chapter of their lives came to an end, so did their communication.

Now fifteen years later, while rummaging through his old belongings Takayuki comes upon a final unopened letter from Aya, having somehow never noticed it before. Inside he finds it filled with a dark confession: Aya wrote that she killed someone, and must now atone for her sins. With long-forgotten feelings resurfacing, Takayuki embarks on a trip to Aya’s hometown of Matsue to find her and get to the bottom of the mystery. Using Aya’s own letters to provide him with leads to track down her high school group of friends, Takayuki comes to find that no one seems to have known an Aya Fumino; it’s as if the girl who wrote him these heartfelt letters never actually existed. 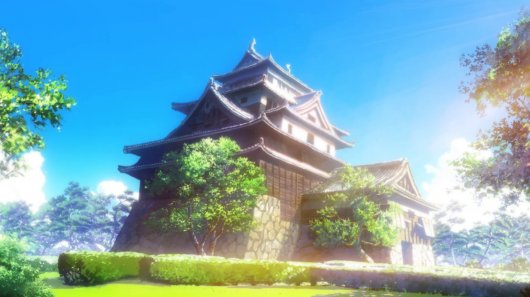 From here, the story proceeds through ten chapters, each one loosely based around one of Aya’s ten letters. The gameplay itself is broken down into two parts: environmental exploration and dialog interrogations. Interacting with the surroundings follows a very straightforward approach. A list of commands, like Move, Ask, and Check appear on the right side of the screen. Most are context-sensitive; selecting the Ask command will only yield results if there is another person visible on screen. Selecting Check lets you move a magnifying glass around the static scene currently on-screen, zoom in or out slightly, and investigate areas of interest whenever the icon turns red.

It is precisely these elements of gameplay, which make up roughly 80-90% of the full experience, that are entirely too simple and restrictive. The environments, while consisting of pretty, hand-drawn artwork, set a low bar in their level of player interaction. Any given scenario may max out with as few as three or four interactive hotspots, some of which offer superficial descriptions like, “It’s a hallway” when clicked on. There is very little need to actually look around carefully, as it often offers up nothing of benefit. The few times an object absolutely must be examined, it’s plainly stated in the game, with no outside-the-box thinking required. The rest of the gameplay interactions are similarly restrictive; commands like Guidebook or Smartphone are sometimes simply disabled in scenes where they’re not required. When changing locations using the Move command to access a city map – assuming one isn’t locked into the current location until certain conditions have been met – you will quickly discover the dull futility of trying to play the game at your own pace, since characters and events do not appear until you have been specifically instructed to go there.

In its opening cinematic, Root Letter identifies itself as a “young adult suspense thriller”, but the extreme level of hand-holding is only exacerbated by some shortcomings in the actual narrative immersion. There is quite a bit of cyclical game design, with many locations having to be revisited day after day during the course of the investigation, sometimes with little-to-no actual storytelling benefit. In what is clearly an attempt at creating a realistic, detailed slice of life, there are quite a few scenes involving visiting (and reading about) local landmarks. Another subplot requires learning about the area’s culinary specialties by stopping in for an informative lunch or dinner at a local eatery on a daily basis as well. These choices are well-intentioned to provide flavor, but instead result in creating some bland hoops that have to be jumped through before the mystery can finally move forward again. 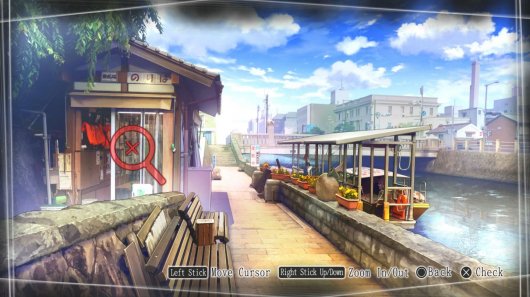 The second major component of gameplay, the interrogation scenes, involve a more varied approach, encompassing dialog-based puzzles into tense character interactions a la Phoenix Wright. The mystery around Aya Fumino deepens as each of her one-time classmates turns into a dead end, going pale and clamming up at the mere mention of her name. Despite threats to abandon his search and leave town, Takayuki presses on, resulting in him having to, one by one, mentally break down Shorty, Monkey, Snappy, Fatty, Bitch, Four-Eyes, and Bestie. This is accomplished by going through a multi-stage interrogation scene, systematically countering the subject’s arguments by presenting objects obtained in the investigation or bringing up facts and subjects at just the right moment to push them into admitting the truth of what happened fifteen years ago.

As far as puzzles go, these sections really are the meat of what Root Letter has to offer. Though it is possible to present the wrong item or jump the gun on an issue before the subject is ready to spill the beans on it, these scenes are pretty forgiving. Every interrogation allows for Takayuki to make several mistakes, each one represented by an envelope icon that’s ripped to shreds when he messes up. If all attempts are used up, the interrogation simply starts over anew. There’s never really a way to lose, and no consequences for failing an interrogation other than starting over. Mistakes are sure to be made, however, since it can be very difficult to infer what the game expects as the right response. The choices are occasionally poorly clued, leading to some forced trial-by-error guesswork.

While failure really isn’t an option, other choices are made that have a bearing on the outcome of the story. A handful of different endings may occur based on how Takayuki has responded to each of Aya’s old letters throughout the game. It’s not just the ending scenes that will be affected by this either; the final two chapters are unique based on the choices up to that point. Rather than simply altering key lines of dialog in the finale, the different paths take the climax into several wholly different outcomes that are worth experiencing in their entirety. The true ending that answers all questions cannot be unlocked in a single playthrough; rather, upon completion a new game can be started, with completely new responses available. Luckily, it is possible to fast forward through individual text boxes, entire sections of dialog, or even advance to the next chapter at the press of a button in replay scenarios. 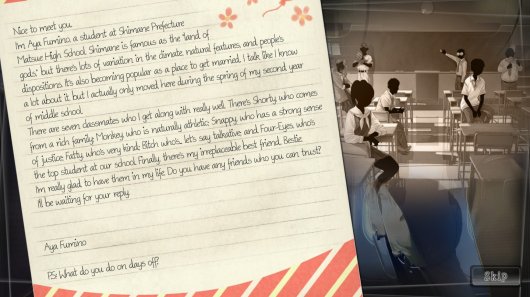 If playing through the story is lacking somewhat in entertainment value, at least the music and visuals are pleasant. The hand-drawn scenes, though rarely animated, are pretty and vibrantly colorful. The artists manage to create an aesthetic of clear blue skies and gorgeous greenery in the city’s parks and suburbs while keeping it grounded in reality with locations like the high school and the city’s civic office complex. The music, too, is catchy; before long I found myself whistling the game’s theme as I went through my daily life. It’s too bad, then, that there are only a very few actual tracks in total. Prepare to hear the same tune, appealing though it is, again and again. All characters with the exception of the perpetually silent Takayuki are fully voiced in Japanese. This includes Aya, who narrates her letters at the beginning of each chapter. The Japanese voice actors do a fine job, although some of the lines run on much longer than they take to simply read. Of course, one can simply turn the voice audio down to zero if so desired.

In the end, Root Letter is an interesting concept for a story. The idea of a mysterious girl who seems never to have existed is a perfect fit for a mystery thriller, and the implication of a murder makes it that much more interesting. The production values work well enough: the game looks and sounds very nice, though variety is somewhat lacking. Where it loses points is in alternating excessive hand-holding with overly slow and unfocused execution, choosing to bog the story down in trite sojourns into local customs and culinary traditions. It’s clear the game’s heart is in the right place, so hopefully future entries in the series will increase the amount of relevant player involvement and trim the unnecessary fluff that needlessly slows this one down.

Proving too slow-paced and repetitive for its own good, Root Letter fails to seal the deal on its promising set-up, though it may yet pave the way for improved Kadokawa mysteries to come.

GAME INFO Root Letter is an adventure game by Kadokawa Games released in 20162016 for PC, PlayStation 4 and Vita. It has a Stylized art style, presented in Slideshow and is played in a First-Person perspective. You can download Root Letter from: We get a small commission from any game you buy through these links.
The Good:
The Bad:
The Good:
The Bad:

What our readers think of Root Letter