You are sitting in your apartment reading “The Legend of Panmorphia”, which declares that a sentinel is born once in a generation and tasked with using an amulet to save a faraway land in times of trouble. Just as you are about to close the book, you suddenly find yourself at the seacoast, gazing at that very amulet nestled among the rocks. Touching it, you are instantly whisked away to a stone tower overlooking an entirely different ocean, this one sparkling beneath a colorful sunrise. Above the stone archway are four symbols: a human hand, a cat, a bird and a fish, representing four interwoven odysseys. Having come to the realization that you are Panmorphia’s sentinel, you wonder how these particular elements will impact your attempt to rescue this magic-infused world. While wandering the naturalistic locales, you will solve jigsaw-like puzzles, use various items, and play simple mini-games. There’s not a great deal of story or explanation as to why you are so intimately linked to this strange place, how it came to be threatened, or even how it morphed into existence in the first place. But the pathways are so pleasant and your personal transformations along the way so delightfully spontaneous that the quest itself largely suffices.

Panmorphia’s first-person, slideshow-style gameworld is made up of landscape photographs taken on the island of Cyprus and adapted via a Digital Matte Painting process by solo developer Lydia Kovalenko (who created everything in the game except the music and some of the sound effects). The environments consist of rocky cliffs, placid streams, classical ruins, and hidden underwater recesses. Passageways wander through the forest and a steep gorge, sometimes framed by flowering shrubs and branches. Mushrooms thrive in the hollow of an ancient tree, and a locked door opens to a rustic stone hearth with a pot ready for cooking. Your journey starts out full of dappled, soothing light and later transitions to blue-violet night with a sky full of gleaming stars. The point-of-view in many scenes is somewhat off-kilter and parts of the surroundings are slightly out of focus, which helps orient the eye and creates a “come hither” atmosphere as you move in deeper for a closer look. Animations such as flying bees, flowing water, drifting dust motes, swirling fireflies, and blowing leaves make the scenery seem more alive, and transitions are smooth with no loading screen between scenes.

As the only sentient creature inhabiting Panmorphia’s natural nooks and crannies, your emerging guardian abilities allow you to undergo a number of physical transformations. I won’t spoil what they are, but you are first made aware of the changes by a slight glimpse or sudden, unexpected sound. After the first changeover you are able to view the locales at night and nearer to the ground, enhancing the experience of exploring a mythological European garden. Constraints bind you in each metamorphosis: for instance, in your original state you can’t climb over rough territory to new heights, while another iteration avoids the deep forest. Switching back and forth between forms requires navigating to the spot where each change occurs, but otherwise is very easy. 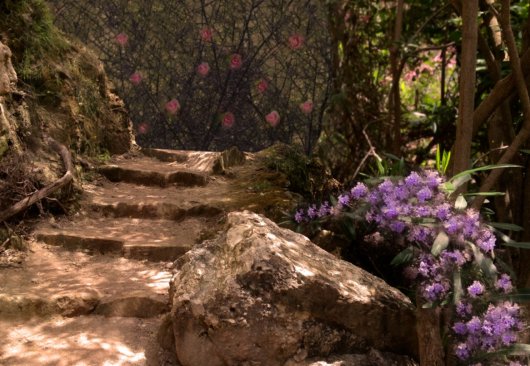 Observations about the world and descriptions of the actions you take are not voiced, appearing instead as text near the top of the screen. These provide a sense of companionship for the player, but basically you are on your own. The orchestral background music by David Decker is lively and suitable with a “magical place” appeal, playing repeatedly on a long loop. Ambient sounds also accompany your journey, like the gurgle of water, crackle of dry grass, rumble of a stone door, and the beating of wings.

The bulk of gameplay involves inventory challenges, some of which are creative and non-obvious. You’ll also encounter traditional mini-games such as a sliding block challenge, removing overlapping threads in the correct order, interpreting symbols, duplicating patterns, and parsing a riddle to create a potion. These puzzles are straightforward and reminded me of the challenges often encountered in casual games. The chief drawback is the lack of a smart cursor, which means that there’s a significant amount of pixel hunting. Some items are quite easy to see, but others are well-disguised. Directional hotspots are also unmarked, so as you search for items your clicks will inevitably lead you out of the current screen by mistake. It wasn’t unusual for me to accidentally click out of a screen four or five times before I found anything useful in it. 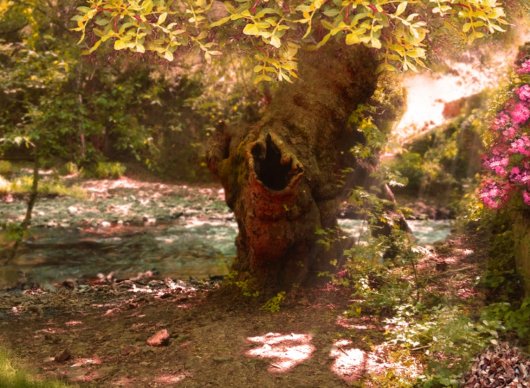 Originally released for iOS, Android and Kindle devices, Panmorphia was later ported to Windows, Mac and Linux, which is the version I played. Unfortunately, I was never able to get the game to play full screen – it stayed in a window the entire time, nearly filling the screen but with the toolbar still on top and black bars on either side of the interactive area. Helpful additions include a notebook that records glyphs and other puzzle elements so that you don’t have to take notes. There’s also a map, which isn’t interactive but does show your location at all times. The map contains a hint feature that points you in the right direction and gives you an idea of what you should be attempting next. The game uses autosave only, and it took me nearly five hours to complete the journey. Had I not occasionally consulted the hint system, it would have taken even longer.

Panmorphia grants you a glimpse into an alternate reality and challenges you to fix what ails it. Elements of traditional adventuring are happily intermingled with more casual design features here. The story is simple and there’s no character interaction. The mini-game puzzles are rather easy, but the pixel hunting and inventory challenges are tough. Discreet text descriptions alleviate the feeling of otherwise lonely discovery, though navigation without directional arrows is awkward. Still, there is something about this game. The sense of enchantment builds gradually; metamorphoses startle at first, then anticipation builds for the next one. And the photographic scenery, shown from unusual angles with quaint details and viewpoints, is especially beguiling. For all its obvious limitations, somehow Panmorphia won my heart in ways that most games don’t. It’s picturesque, it’s clever, and it’s soothing. If you like to wander off the path that’s much-trodden, consider giving it a whirl.

What our readers think of Panmorphia