For a game that boasts of being inspired by David Lynch’s multi-layered Twin Peaks drama, Rusty Lake Hotel is surprisingly lacking in narrative depth. The commercial successor to a series of free-to-play room escape games, it will be painfully obvious to newcomers that the intended audience is not so much adventure gamers and horror lovers in general, but those who have already played the earlier installments before embarking on this new quest. It’s certainly got a Lynchian weirdness vibe, but the game is an almost entirely plot-free puzzler that strings together a series of closed-room sequences and raises more questions than it even attempts to answer.

Set at the titular Rusty Lake Hotel, the environment is less interesting than its rather ominous title makes it seem. Indeed, other than the old-fashioned elevator and the enormous amount of paraphernalia the guests have apparently brought with them (I pity the poor bellhop), this appears to be a normal hotel at first glance. The characters are all anthropomorphic animals in fancy attire, but the setting itself is ordinary: there’s a lobby with a front desk, a small kitchen and dining area, and six upper level rooms to explore—one for each of the guests and the proprietor. There’s nothing particularly odd about the building, though the goings-on within are certainly unusual.

The story of Rusty Lake Hotel is unfortunately paper thin, even for a game that only takes about three hours to complete. A voice-over monologue from the owner, Mr. Owl, at the beginning states that each guest has a purpose for being at the hotel and that he has his own reasons for wanting each of them there. Great! Sounds like the start of a good mystery with some compelling character depth and intriguing twists along the way. But no, sorry. Instead of an actual plot, you merely have to go through the hotel slaughtering the visitors one by one in their respective rooms. Even then, a game played from the perspective of a serial killer could make for a very interesting story, but there is no motivation ever given for the unseen player character, apparently named Harvey, other than the fact that he’s acting under Mr. Owl’s orders and with the consent of the rest of the hotel staff. 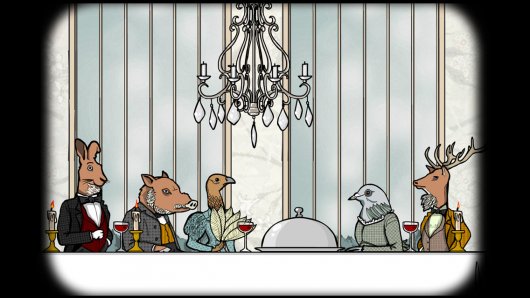 The characters are even thinner than the premise. Everyone is given a name like “Mr. Rabbit,” and small clues in each room provide a short explanation for their presence at Rusty Lake, such as the play that Ms. Pheasant is starring in. The guests have only a handful of lines each, none of which actually tells us anything about their personalities. Not that they matter much, as they exist just to be murdered in a variety of abnormally complicated ways. The only character given a little more substance is Mr. Owl, though without having any of his motivations or background explained, even he just comes across as a one-dimensional sadist who enjoys having people killed.

The music is consistently similar-sounding throughout, with a few long instrumental background pieces that accompany the action. With the exception of the lounge music in the lobby, it’s all rather generically “creepy” music with some violins and bells interspersed with a few brief pauses of silence between loops. The voice-over for Mr. Owl is well done, and I wish that other characters were also voiced, as at least that would have made them more distinctive by injecting some personality. Other than a few spooky sound effects such as the feline bellhop’s yowls and creaking furniture, the sound just doesn’t add much to the atmosphere of the game.

One of the more positive elements is the hand-drawn art, which is very “flat” looking but is clean and nicely designed. The graphics feature a muted color palette made up almost entirely of beiges and browns, with a smattering of pale blue and green and only the occasional bright color. There is a rather Victorian feel to the illustrations, which is appropriate considering the game takes place in 1893. 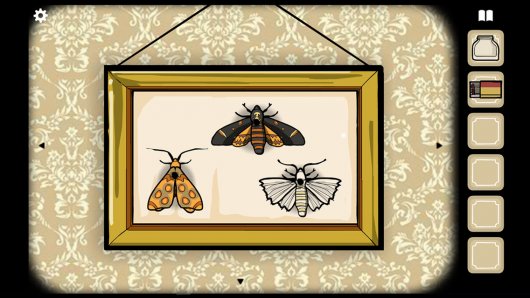 The gameplay is split up into different days, and you must first roam around the hotel looking for recipe items for that night’s dinner. However, each recipe involves going into one particular guest’s room and killing them. Once in that room, you can’t leave until you’ve solved all its puzzles, effectively making the experience a five- or six-part room escape game.

The simple slideshow-style control system is explained in a short tutorial available from the game menu, but is easy enough to figure out without it. One mouse button does all, but there is no smart cursor to tell you which items are interactive, so you’ll have to guess. This isn’t really a problem, however, as the environments are so sparsely decorated that you’ll never need to do any pixel hunting. Applicable items are added to the inventory, displayed down the right-hand side of the screen, from which you can select objects for use later on. Clicking the triangles at the edges of the screen will move you around the room, and the meager, non-interactive dialogue is activated simply by clicking on the characters. There’s also a small journal that shows what ingredients you need for each meal. 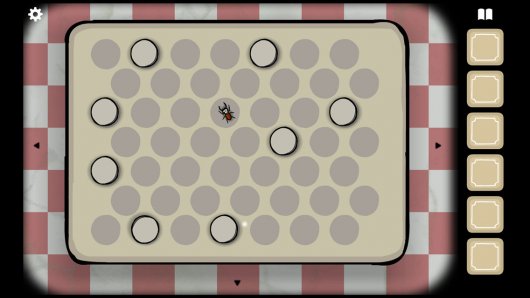 The puzzles are mostly inventory-based, with a few codes to crack in each room and one bizarrely out-of-place task that requires you to trap a cockroach on a table. That may sound fairly straightforward, but the puzzles often end up being frustrating. Since you can’t leave a guest’s room until you’ve completed your task, everything you need is always in the current location, but the game doesn’t provide any actual reason for solving puzzles or follow any sense of logic, even internally. The codes can be difficult to decipher, and most seem to be placed there for the sake of stopping your progress, rather than for any practical purpose. I found myself resorting to the official walkthroughs on the developer’s website multiple times, but even after doing so I never kicked myself thinking the solution should have been obvious. Instead my experience was punctuated with confusion like, “How am I growing a wall-mounted deer’s antlers just by clicking on them and why is fluid dripping out of its nose?” or “Why am I rooting around in a toilet for animal droppings?”

Although I disliked much of the puzzle abstraction, the problem isn’t so much that Rusty Lake Hotel is a bad game, just a paper-thin one designed mainly for those already familiar with this world. Presumably it makes more sense if you’ve played the Cube Escape freeware games that take place in the same world. Or at least, you’ll be more patient in getting just another piece of a larger puzzle that is far from fully formed yet. However, for new players with no prior experience it’s not going to hold nearly the same thrill. It’s certainly got a strange vibe overall, and the unusual premise is almost disturbingly casual about serial killing for pleasure, but comparing it to Twin Peaks is overselling a lot. The basic game mechanics are intuitive, while the simple art and sound design are effective enough, but Rusty Lake Hotel fails to register with any kind of plot or character development, which is its fatal mistake.

Rusty Lake Hotel is available at:

As the first commercial installment in on ongoing series, Rusty Lake Hotel comes with both story and gameplay reservations for newcomers, and only escape-the-room fans should bother checking it out.

GAME INFO Rusty Lake Hotel is an adventure game by Rusty Lake released in 2015 for Android, iPad, iPhone, Mac and PC. It has a Stylized art style, presented in Slideshow and is played in a First-Person perspective.