continue reading below
»   Home  /  Articles  / Reviews  / Jerry McPartlin: Rebel with a Cause review

Jerry McPartlin: Rebel with a Cause review

Although the focus on storytelling is stronger than ever in the adventure genre these days, we are clearly in an era of cynicism, where bleak characters choose between bleaker and bleakest choices. It’s certainly led to some rewarding experiences, but if you’re like me, it also makes you long for a more carefree time, like the one where cynicism gave way to sock hops and poodle skirts. 1950s Americana is an area of pop culture that has been underserved by adventure games (and by gaming as a whole). If you’ve been dying to have that particular itch scratched, you’ll be very happy to know that Jerry McPartlin: Rebel with a Cause is here. Unfortunately, it happens to be made by a German developer with only one significant game on their resume—a shipyard simulator, at that. Perhaps not surprisingly, the end result is anything but neato, but a rather half-hearted and underwhelming effort. And that’s a drag, baby.

You play as slick-haired Jerry, an aspiring rock star in the quiet town of Barnett Springs. You’re just a normal guy trying to be cool in a lame world, until your love interest’s father alerts you to mysterious and devious things happening in town, primarily centering around a suspicious government agent who might actually be a supernatural villain. Stopping this bad guy, the focal point of the game, turns out to be a giant recipe fetch quest that borrows heavily in tone and content from The Secret of Monkey Island, though definitely not in cleverness or creativity. Retrieving these ingredients often requires you to deal with sub-layers, and sometimes sub-sub-layers, of still more fetch quests to the point of near frustration. I wondered at times if Jerry McPartlin is meant to deliberately satirize the common nature of such fetch quests, but it seems to be an actual design choice.

Fetch quests, of course, are generally designed in a way to promote a great deal of laborious backtracking, and this game is no exception. Exploring the world of Barnett Springs to find the ingredients and win the day is not a very compelling experience, however, because this city is total deadsville, man. For some reason, the entire game appears to take place in the middle of the night, and as a result the town square is pitch dark (to the point of being almost unable to see your character while walking) with absolutely no people. Don’t worry though, as the high school hallway and the local post office are apparently open 24 hours in this world. Even so, you will only encounter seven other humans in the entire game, which is a ridiculous dearth of interaction for a game ostensibly built on dialogue. 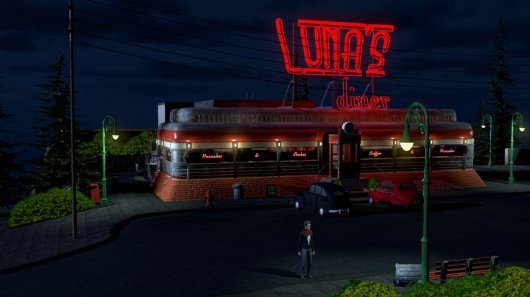 The locations you visit are almost totally bereft of possible interactions as well, a fact driven home each time you hit the Space bar to show all available hotspots. There’s a scene where you visit the house of your childhood, and while I’m hardly expecting Gone Home, surely the developer could have bothered to add at least a few hotspots with some commentary from the protagonist. Much more could also have been done with the town pawnshop and the various items present. But providing that type of internal context is not a focus here—this is a game that was clearly intended to be about dialogue with the few other cats around town.

I was a bit nervous about the writing, this being a German-developed game about an era of American culture that was all about the slang. But while those fears were allayed, the script is poor in ways I didn’t anticipate. Jerry McPartlin does in fact appear to be well-localized, avoiding some of the odd vocabulary glitches that foreign games often struggle with. The problem is that this is a comedy game written by someone with a very dull sense of humor. See, your love interest’s father is a Hopi shaman named Wikvaya. Bizarrely out of place in a 1950s Americana adventure, this creates a lot of really funny possibilities—except there’s nothing actually funny written. The fact that he’s a shaman seems to be the entirety of the joke, and this is a recurring theme throughout: unusual, potentially very amusing, non sequitur concepts and some strange late-game settings are delivered with no edge or bite at all.

At the other end of the spectrum, some jokes get re-used to the point of aggravation. It is supposed to be hilarious that there is a set of triplet brothers in town whose names rhyme and Jerry can never keep them straight—an idea with modest comedic promise but absolutely no good writing to drive it home. I had the same reaction to almost all of the attempts at humor in this game that I do at some of the Disney shows my children watch (which they seem to find very funny)—it’s just head-shakingly silly. 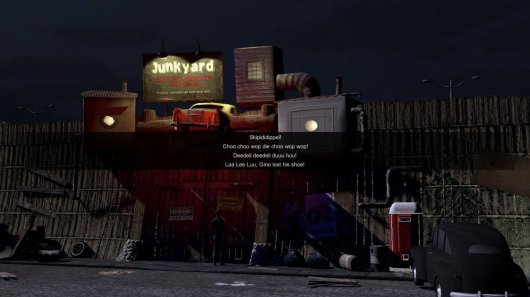 It’s an even bigger shame that the writing is such a letdown, because the voice acting is a real strength of the game. I can fill volumes with complaints about voice-overs in comic adventures, especially the hero characters, but the performance for Jerry nails the likeable, aspiringly-hip-but-not-obnoxious tone of some great characters from the era of Happy Days. His is the only voice that really matters, but none of the supporting voices are anything to complain about either. The actors seem invested in their lines and understand the context of what they’re saying, which is half the battle in many lower-budget games.

Even apart from the perpetual darkness, the world of Barnett Springs is not an especially interesting one to look at. The environments are not very detailed and would have been more at home a decade ago. The characters are out of proportion to the backgrounds and have odd animation cycles when standing still; the times when you walk up and down stairs also look laughably poor. The game skimps out on many other necessary animations, some of them entirely: there’s a moment where you need to take an item from a locker, and the game doesn’t bother to animate you opening it—Jerry literally just reaches through the door and the item magically appears in your inventory. Character lips don’t even move while talking, just another reminder that there wasn’t a lot of focus on the more dynamic elements. 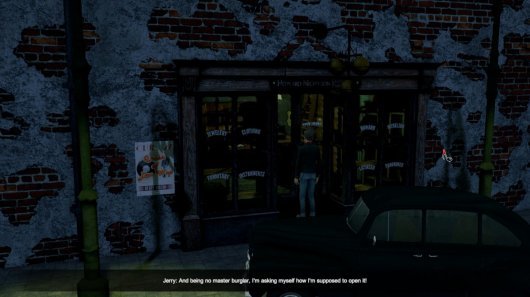 The worst visual-related issue is without question the camera positioning when Jerry is walking and running. The game zooms too close on Jerry in certain areas like a lengthy hospital hallway, and his constant starting and stopping as you keep clicking to inch him forward is so awkward that it might be the funniest part of the game if it didn’t infuriatingly prolong the necessary movement. (Double-clicking allows you to run, but that idea is even worse in scenes like this.)

Even more disappointing is the complete lack of music. The only track in the game is a terrible rockabilly tune called “Billy the Barber” that plays on the diner jukebox on endless repeat. To be fair, it’s an original song recorded by your arch-rival, so you’re supposed to hate it, but the puzzle requiring you to kill it ends up being rewarding for entirely the wrong reason. The rest of the time you’ll walk around the quiet and empty town of Barnett Springs with only the music in your head. How on earth it was thought to be okay, for a game where you play an aspiring rock star in an era where music meant so much to American pop culture, to have no music at all is beyond me, and is one of many things that make Jerry McPartlin feel as though it lacks any ambition or polish. 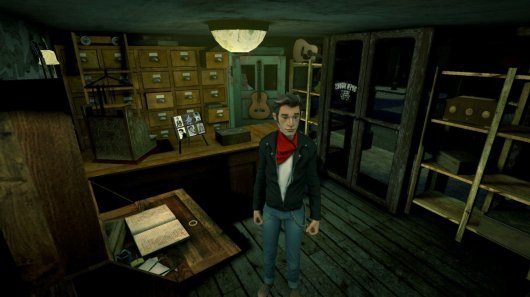 This is a very easy game, and therefore a particularly short one. I finished in just a shade over four hours. The only time I got hung up was a “puzzle” that baffled me. In the midst of all the fetch quests, at one point you need to acquire a certain ingredient. I tried a number of ideas, but only realized by accident that as soon as this “quest” became activated, a formula for this item magically appeared in the room where I could manufacture it. No clues or logic, especially in this largely barren game world, as to why a room that I had previously visited would suddenly have a new item in it. It’s a major feat of laziness to drop new objects into previously visited locations with no context and call that a puzzle.

This isn’t the only example of cheap design, either. Prepare to proceed with a great deal of trial and error, particularly since there are many inventory interactions that seem to make sense but offer no programmed responses to help you on the right track. There are many ways, in real life, to get past a locked door, and when I try one in-game that makes logical sense, the developers really should strive for something more than “Not gonna happen,” Jerry’s sole response to such interactions. The game actually allows you to accumulate a fairly large inventory because items are never disposed of after their intended use, but you’ll always be focused on the most recent items added. There is a creative multi-step final puzzle involving Satan and a cooking contest that feels like something from the early Telltale days of Sam & Max, but these last fifteen minutes are the only time the adventure seems to really accomplish the bizarre tone it frequently strives for yet usually comes up short.

Ultimately, this is a playable enough adventure that is never outright offensively bad, but is also never especially good, and really doesn’t try too hard to be either. Interaction is sparse throughout the endless string of fetch quests in this empty, visually nondescript, musically-deprived town. The thin story is sprinkled with occasional attempts at absurdist humor—particularly some of the supernatural elements—but can’t stay committed to real absurdity long enough, always straying back to harmless silliness and supporting characters that are generally more annoying than amusing. Jerry McPartlin tries briefly and half-heartedly to be memorably weird and far out, but ultimately feels lifeless and humdrum—and for a setting with so much promise, that’s a real bummer.

It’s based on a fun idea and setting, but Jerry McPartlin isn’t nearly ambitious enough or committed enough to its humor to leave any lasting impact. What a drag.

GAME INFO Jerry McPartlin: Rebel with a Cause is an adventure game by Bluebox Interactive released in 2015 for Mac, PC and Linux. It has a Stylized art style, presented in 2D or 2.5D and is played in a Third-Person perspective.

What our readers think of Jerry McPartlin: Rebel with a Cause