Note: This game was originally released under the title Albino Lullaby.

I’d expect most people’s image of a grandmother probably consists of a kindly little grey-haired lady, knitting in a rocking chair, ever doting on her beloved grandchildren during their too-infrequent visits and giving vaguely disappointing gifts at Christmas. Not so the matronly overseer in Ape Law’s Albino Lullaby. Maybe that’s because she abducts her would-be offspring, locks them away in a prison-like underground city, subjects them to torturous behaviour modification practices, and waits for them to lose their limbs and all pigmentation along with their individual personalities, leaving only demented, raving gelatinous blobs who are subservient to her will. And you thought YOUR family was dysfunctional!

In the debut episode of this three-part horror series, you are the latest unwilling recruit into this psychotic clan. A car crash knocks you unconscious in a surreal opening cinematic that would make The Twilight Zone seem tame... and then things get weird. You awaken in a dimly lit locked cell surrounded by darkness and eerie whispers. Is this a nightmare, or some kind of twisted, grotesque reality in which you’ve been trapped? The answer isn’t clear, but one thing is certain soon enough: the danger is real, and you won’t get out unless you break free and try to find a way back to the surface (or wherever our own world actually is, spatially relative to this creepy place “in between”). 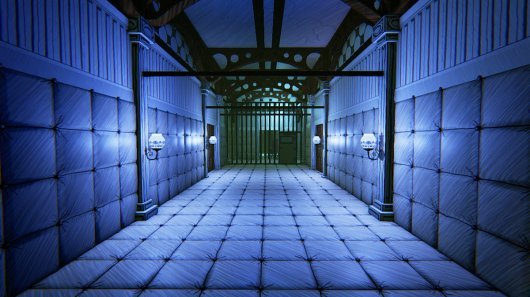 At first this seems like it will be a fairly easy task, as the cage fortuitously breaks open, allowing your release. Using the standard 3D first-person keyboard/mouse or gamepad controls, you’ll begin wandering unusual hallways that feel like a cross between a mental institution and carnival funhouse. The hallways between rooms dominated by wooden gurneys and torture devices have disturbing signs on their striped-paper walls, issuing warnings like “All prisoners must be fully sedated” in between identical paintings of an insect. Along the way you’ll collect a raft of notes with obscure scribblings from the other subterranean denizens. Often nigh-incomprehensible on their own, eventually they begin to form a picture of a broken, deeply disturbed people – a word I use only in the loosest of senses. Whatever they once were, they can barely be considered human anymore.

There are no real puzzles to solve in Albino Lullaby, only keys and buttons to find in this increasingly labyrinthine world, often causing architectural shifts in the underlying machinery that grant you further access when pressed. It’s not unlike the cult hit The Cube, only without the problem-solving element, which is a shame. You’re not in a cube here, mind you, so eventually you’ll make your way to a giant mansion with still more ominous signs posted about keeping “Buck” contained. Sounds like sage advice for an interloper looking to escape, but also a gut-check portent of trouble to come. It may as well say “continue at your peril” for all the good you KNOW this warning will do you. 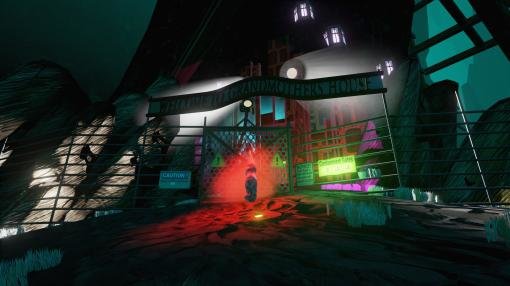 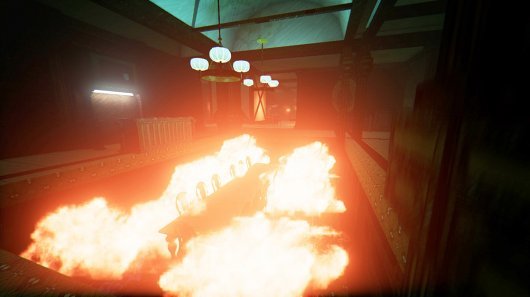 Indeed, trouble will soon find you even if you don’t go looking for it. Buck is just one of your worries. He may be the worst of the mysterious “grandchildren”, but he’s hardly alone. The sprawling homestead is crawling with them – literally. Or maybe shuffling is the better term; their limbless, deformed bodies leaving slime trails behind as they slither inexorably towards you with murderous intent, indignantly decrying your open rebellion. I haven’t heard someone called a “worm” this often since The Wall, and more than once was I reminded of the nightmarish scenes in the Pink Floyd classic (the movie version, in particular). The music isn’t nearly as good, though it’s not a bad blend of haunting tones and the occasional location-specific tune like a scratchy old record skipping on an antique cabinet player. These complement the ambient footfall, mechanical sounds, and the ever-present moaning about the stranger in the grandchildren’s midst, wondering why it doesn’t “resonate with joy.”

More like slugs than the humanoids they presumably once were, these monsters are anything but fast, moving just quick enough to perpetually keep you on edge. But what they lack in speed they more than make up in sheer number and tenacity. I’m not easily frightened, but I’ve always been especially creeped out by the relentlessness of zombies. You can run, but you can’t really hide. You kill one, and there’s always another, and another. No matter where you go or what you do, they just… keep… coming! The grandchildren are not zombies exactly. They don’t bite, they don’t eat brains, and these poor souls are alive, not undead. But for all intents and purposes, they are zombie-like in their single-minded dogged pursuit of you. And they’re every bit as dangerous. 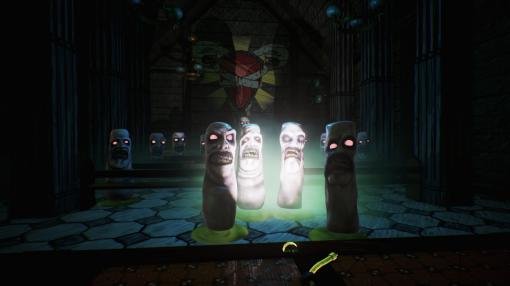 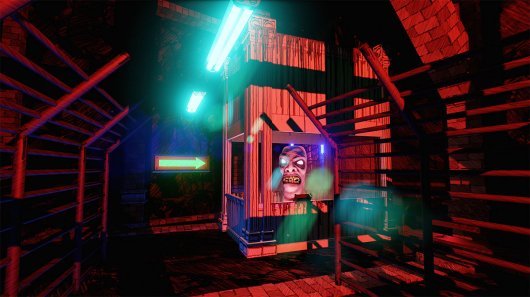 The best way to deal with the grandchildren is to avoid them altogether if possible. The middle third of this episode is essentially a giant stealth sequence both indoors and out in a whole underground city. To get around you must crouch and slink slowly past patrolling and stationary enemies alike, snooping around for still more buttons and keys and notes. Easier said than done. The constant exposure to the dark seems to have sharpened your opponents’ night vision, leaving you totally exposed if you so much as poke your head into their line of sight. Then all hell breaks loose. Not only will the grandchildren NEVER stop chasing you once they’re alerted to your presence, but they function with a kind of hive-mind and always seem to know exactly where you are, even if you’ve ducked well out of sight. Once I was spotted on a bridge, so I hightailed it across a ledge, over some sloped rooftops and back inside the house through a window, knowing they’d never be able to follow. But they didn’t need to follow: without even showing my face again, the creatures already inside somehow knew where I was now hiding and soon converged on my new hiding spot.

The grandchildren don’t attack you when caught, exactly, but as soon as you come within close proximity of one, the screen will start to go staticky as your lifeforce slips away. Escape in time and clarity will return, which is easy to do with just one or two grandchildren nearby. But find yourself cornered or swarmed, which becomes increasingly likely the further you progress, and it’s game over. You’ll then be sent back to the nearest checkpoint to try again, with the entirely unhelpful instruction to “try harder next time.” Yeah, thanks. Expect to see that message far more often than you’d like for reasons that don’t always feel fully deserved. 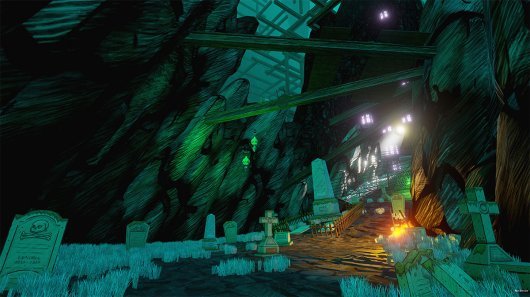 There are sporadic blue lamps that are supposed to protect you from the grandchildren, but these prove to be fairly useless. For starters, you can’t even light them until you’ve acquired the matches a fair way into the game, but even when you have, the lamps stay lit only temporarily. They don’t drive the monsters away, merely hold them at bay, theoretically giving you a chance to escape. But if you have room to flee, there’s really no need to stop and fumble with the lamps unless you need some light in the darkness. And I do mean fumble – there are no hotspot indicators in this game, so you can easily get yourself into position to light a lamp, only to click… and have absolutely nothing happen. Shuffle around a bit and click, click, and click again, and maybe the lamp will eventually light up. THIS is your great salvation with slimy homicidal monsters on your tail? Albino Lullaby has been designed from the ground up to be compatible with VR devices, so perhaps these issues don’t apply to the virtual reality experience, but I played it on a standard PC and found them a constant, if ultimately minor, nuisance. 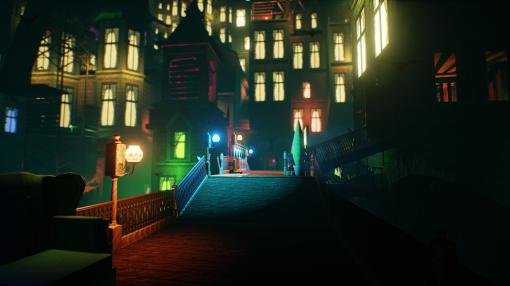 In the final third of the game, you’ll get your one and only weapon. It’s not a gun, but for reasons unexplained, a remote control clicker emits a giant bubble that is deadly to the grandchildren. With only one charge per click you can’t use it indiscriminately, and you’ll need to continually power it up at scattered recharge stations. This sounds like a big help, and it is, but of course the game ramps up in difficulty to accommodate your newfound ability. Rather than sneaking around, you’ll throw caution to the wind as the grandchildren come out in greater numbers while deathtraps appear all around you. To avoid getting trapped, you’ll find yourself zipping past collapsing floors, bubble-killing a horde of blob creatures, and frantically searching for the next recharge station before needing your weapon again. What makes the “clicker” more frustrating than it should be is that the bubble largely obscures your view (imagine blowing a big bubble of green chewing gum in front of your eyes, and you’ll know what I mean) precisely when the screen is already starting to distort from the presence of the grandchildren. You’re literally running blind just when you need your vision the most.

The action builds to a crescendo in the endgame, a final confrontation that’s less a “boss fight” and more a high-octane culmination of everything you’ve faced so far crammed into much tinier spaces. At least, that should have been the endgame, as it’s a suitably tense and exciting way to finish. Unfortunately, there’s an entirely anti-climactic segment before the credits roll that includes some light platforming of the sort you’ve never been required to do all along. This probably wouldn’t have been particularly difficult if not for the near-unplayable stuttering that plagued my game during this section. Even without the massive drop in frame rate, however, the whole scenario still would have felt like a letdown after the pulse-pounding action that preceded it.

What our readers think of Alice’s Lullaby: Episode 1 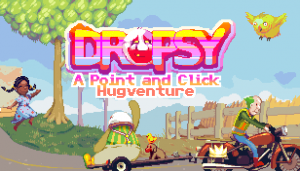