continue reading below
» Home / Articles / Reviews / Hidden: On the Trail of the Ancients review

Hidden: On the Trail of the Ancients review

The first installment of Lost Spell’s two-part panoramic horror adventure Hidden: On the Trail of the Ancients delivers a chilling, Lovecraftian gothic atmosphere with a gradual feeling of uneasiness settling in around you – particularly during the first half – but the most horrifying moment of this game for me was when it suddenly, jarringly rolled credits just as I thought I was finally picking up some momentum.

It’s 1934. You’re Thomas Farrell, member of an expedition into the South American forests of Patagonia searching for an aboriginal city that some records suggest actually predates known civilization. Before joining your uncle Eneko and the rest of the expedition in the woods, you head to Buenos Aires to follow a clue left by Adriano Scopelli, a colleague of your uncle who was trying to prove the existence of the lost civilization before dying under mysterious circumstances. Following his trail to a local boarding house, you spend the first half of this episode looking for a way to enter the room of the deceased man and uncovering the terrifying secrets he learned in his final days.

Hidden plays like a lot of traditional first-person adventure titles: you move via mouse clicks, always stationary in one spot but with the ability to rotate the camera in a 360-degree field of vision. The cursor is stationary at the center of the screen. If you want to pick up an object, interact with a hotspot, or move to a new location, you have to swivel the camera so that the cursor in the middle hovers over the point of interest; it will change into a corresponding icon, and you’re free to click away. Navigating in this way will cause the scene to blur and flash to reveal the next one. Though this generally works fine, there were a few instances where I attempted to interact with an object or piece of furniture in my immediate vicinity, to no avail, only to find that I had to move to the next screen a few feet further on before I was allowed to click on said object. Not a huge deal, but an annoyance that could be responsible for missing out on a few items of interest the first time through an area. 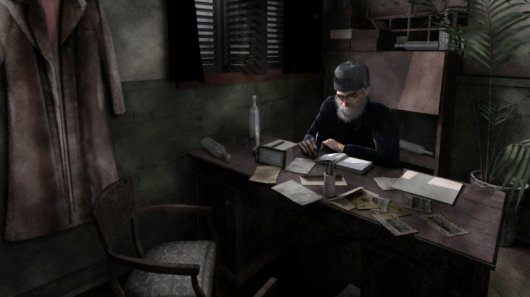 The vibe in On the Trail of the Ancients, especially in its first half, is wonderfully ominous, evoking a palpable feeling of dread. As I gained access to Scopelli’s room and the areas of the boarding house where he completed his research, the chaotic chalkboard scribblings and haphazard jumbles of documents scattered on floors and desktops, all sparsely illuminated by naked flickering light bulbs, evoked a sense that I was on the trail of a mind slowly slipping into the abyss. It all has a wonderfully Lovecraftian feel to it, a slow descent into abject madness, and the longer I spent within the claustrophobic confines of the stuffy rooms and basements, the more uncomfortable I became.

The moody music and dark visuals play their part to contribute to the overall sense of uneasiness. While there’s nothing that looks exactly pretty in the world of Hidden, the graphical fidelity of its locations is fairly impressive, if intentionally dark and muted. However, the episode’s second half, in which you make your way to join the expedition in the Patagonian woods, suffers a little from some grainy environmental textures, especially the nighttime foliage. By the same token, as much as I want to praise the music for providing a constant undercurrent to the general sense of uneasiness, its lack of variety occasionally served to lull me into a sense of sleepiness when stuck on a particular puzzle that had me retracing my steps through the same rooms again and again in search of that one item I was missing to proceed.

Speaking of which, the game’s relative short length belies its level of difficulty, which I found to be rather severe at times. Each of the game’s two major settings – the boarding house and the Patagonian forest – includes one or two puzzles that are far more devious and difficult than the rest. Normally content with the traditional “find item, use item” caliber of inventory obstacle, the developers have included a couple of extreme puzzles that will really test your ability to think laterally. I was able to guess my way past one via trial-and-error, while another – scouring the environment for a seemingly random pattern that holds the information needed to complete the chapter – required the use of a walkthrough. Yet another time I was stuck because I simply couldn’t see an area where an item could be found – it was just too dark. 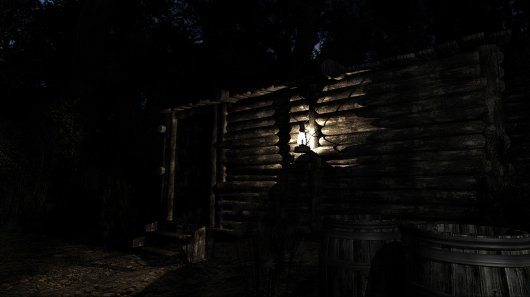 This is where the game started losing points in my book. Not that I mind a certain level of challenge, but I felt that some of these bordered on unfair. To make matters worse, the in-game hint system is next to worthless. Each goal you must accomplish comes with a hint button, which will cycle through five or six hints that are supposed to help lead you to a solution. Unfortunately, the hints are presented in a set order, with no consideration for how far in the process you may have already got on your own. For example, I knew I’d need a wrench to open a grate in the early part of the game. After searching for one in vain for over an hour, I finally broke down and consulted the hint system. It told me what I already knew – that I’d need a wrench – but contained no information whatsoever on where to find one. Worse, the game forced me to endure an arbitrary 90-second wait time each time I used a hint before the next equally useless one became available. Thus the only thing I’d accomplished after cycling through the entire hint queue was another eight or nine wasted minutes and an achievement that was now entirely out of my reach (completing the game without using the hint system).

The spike in difficulty that’ll have you revisiting locations dozens of times in hopes of uncovering a previously missed detail takes a relatively short game and artificially lengthens it by a couple of hours. Still, after I’d finally completed the forest scenario and watched the cinematic that introduced the next chapter in my search for the ancient city, my jaw just about hit the floor when, instead of a new area to explore, the credits began to roll across the screen! In terms of narrative, I felt like the story was just beginning to take off and go into an interesting direction, only for it to be cut off in one of the most abrupt cliffhangers in recent memory, leaving me not so much anxious for the sequel as deflated that my budding interest in the tale was to be snuffed out already. I knew that Hidden was meant to be presented in two installments, but the developers missed the mark on where to cut the thread; this first installment does not seem like a first episode so much as a truncated introduction. It really needed to stretch its legs a bit further to leave me wanting more.

An unapologetic throwback to the days of panoramic first-person adventuring, Hidden: On the Trail of the Ancients provides rich visuals and a dark atmosphere fans of Lovecraft are sure to revel in. At the same time, its graphics occasionally cross the line into “too dark to see”, and a few especially diabolical puzzles (coupled with an ineffective hint system) may cause a higher level of frustration than you’d normally expect from a short indie game – not to mention one that is essentially just the first two chapters in what’s meant to be a longer game.  Despite some shortcomings where its puzzles are concerned, however, I am at the very least intrigued to see how the story continues. The game’s abrupt ending just as momentum was picking up is enough of a catalyst to make me come back for more – as long as I’m not left waiting for too long.

In the opening installment of Hidden, it’s a shame that a game that nails the feeling of being drenched in dark and foreboding Lovecraftian atmosphere falls disappointingly short in other key areas. But with some frustrating moments battling the game’s puzzles and gameplay interactions, and a story that is really more of a tease, it’s hard to artificially maintain excitement for a sequel.

GAME INFO Hidden: On the Trail of the Ancients is an adventure game by Lost Spell released in 2015 for PC. It has a Illustrated realism style, presented in Panoramic nodes and is played in a First-Person perspective.

What our readers think of Hidden: On the Trail of the Ancients