Let's start with a question: what was the first thing you thought when you heard there was an adventure game called Face Noir? In a genre that has previously provided us games titled Noir, Discworld Noir, and L.A. Noire, you might be somewhat surprised to learn that "face noir" is actually a French term that represents the dark side of destiny. Of course (wink and a nod), this first installment in the two-part adventure by Italian developer Mad Orange just so happens to embrace the film noir of its name and provide a very competent private eye mystery straight out of the Raymond Chandler era.

Our hero is Jack Del Nero, a Depression-era private eye who makes camp in a seedy downstairs apartment on the Lower East Side of New York City. Del Nero plays up every noir P.I. stereotype that you can find—he nurses his drinking problem down at the "joint" owned by a girl he's got his eye on, while getting prodded by his corrupt Russian landlord to finally pay his back rent, and getting by on minor jobs like illicit-romance-in-a-hotel-room photography. A late night phone call from an old friend awakens an intoxicated Jack, and one trip down to a dank, rain-soaked port later, a dead body and a hiding little girl ensure that this is going to be a long night. Much of the mystery takes place over the next few hours, as Jack hunts down leads amidst the dark dreariness of the big city to uncover the conspiratorial group that has placed the utmost importance on this child and what she means to the future.

Mad Orange has released this game in Europe previously, and Cognition developer Phoenix Online saw fit to shepherd it to an English-language release. Although it may almost seem self-defeating to release another detective game right as Cognition is building momentum to its concluding episode, do not make the mistake that these games play in the same space. While Cognition is a bloody, hyper-stylized modern mystery with a supernatural twist and a great deal of injected intensity, Face Noir is a methodical slow burn, the type of soft-paced private eye mystery that revels in its seediness with no extra urgency or modernized violence. There is a crime, and there are clues, and the clues take you from one scene to the next just like a nice rainy-day mystery does, without ever acting in a way that would seek the label of "thriller". No double-clicking to run, either; this is one private eye content to take his time. 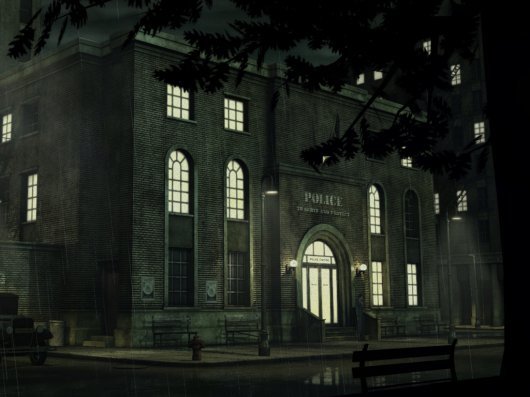 The game remains entirely faithful to classic point-and-click adventure mechanics, with some modern touches. There is substantial use of inventory in about as logical a fashion as you could ask—after all, what would a private eye be without his gun, cigarettes and lighter, flashlight, and lockpick tools? The interactions (I hesitate to use the word puzzles) that utilize these items are simple and straightforward—if it's too dark to see, you should use your flashlight—and there is minimal inventory combination. Further, when clues are discovered, the inner dialogue of Del Nero usually makes it pretty clear where your next destination should be. It's tough to feel lost when your player-character pipes up with: "I should go see if Slovanski knows anything about this."

There are a couple nifty mechanics present that allow Face Noir to establish some of its own identity. Adventure fans are used to picking up disparate facts from various places, and once those facts are discovered, seeing some new dialogue options open up when talking to characters. Face Noir at least forces a bit of intellectual investment into the process: in the midst of conversations, you'll enter "Let's Think About This" mode with 10-15 various facts you've gathered literally floating around the screen. Connecting the correct two with the current conversation topic continues your interaction down the right path. This is certainly never challenging, but at least it feels much more like actual detective work then simply exhausting conversation trees, and you'll likely find multiple instances where you have simply not found all the facts yet and now know that some more digging is necessary.

The game also makes liberal use of close-up sequences for actions as simple as opening a mailbox or attempting to break off a doorknob, but these close-ups have a catch designed to increase interaction. Rather than simple repeated left-mouse clicking, the mouse is meant to feel like an extension of the character's arm. So opening a door involves clicking, holding, and dragging the mouse off to the side to open. While it isn't exactly the perfect PC equivalent of touch-based mobile games, it is a passable attempt to at least do something beyond a lot of clicking, and it's not overused. There are also five lockpicking minigames of increasing complexity, requiring actual precision and a bit of trial and error (though ultimately offering the ability for wimps to skip the sequences, though I never had to). Again, hardly the harbinger of a mighty new genre convention, but it's refreshing to see a game so rooted in old-school tradition show some modern design sensibility. 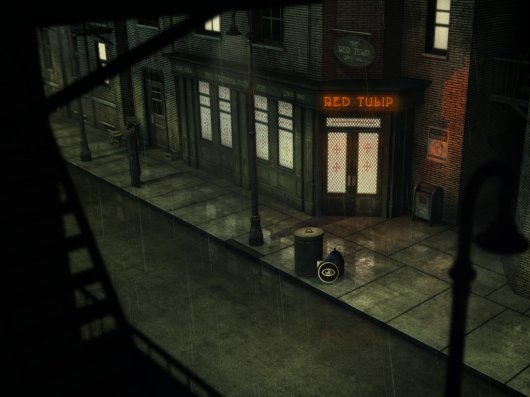 
Face Noir's absolute strength is its delicious film noir soundtrack. The moaning of a sad muted trumpet frames the dour mood of the investigation and sounds exactly like what you'd want to hear wandering the streets of old NYC in the middle of the night. On the other side of the audio spectrum is a generally lackluster cast of voice actors. While Jeff Machado turns in a very good performance as Jack Del Nero (though he should not have been made to constantly exclaim "Dannazione!" when he otherwise sounds no more Italian than Humphrey Bogart), most performances sound anywhere from mediocre to abysmally phoned in. The lack of anything resembling urgency in the voice of a key female character supposedly in life-threatening trouble in the game's final moments is almost enough to make you desperately search for options to let her die instead. There is one (hilarious) exception to the voice acting malaise—the voice of Chon, the rogue Chinese cab driver who becomes your personal chauffeur early in the game. His Chinese accent is thick and overstated, clearly to provide the game's only comic relief, and almost to the extent of being borderline racist (and of course, the subtitles are helpful enough to display the accenting phonetically, i.e. "We go somewhewe? Message weceived!").

It's too bad that the voice acting doesn't do justice to the writing, which is actually much stronger than we've grown to expect from localized games. Del Nero's pulpy noir interjections are as faithful to the American private eye genre as Sam Spade when a dame walks into his office, and the designers load up every background with plenty of hotspots and unique responses for both looking at and interacting with each one. It's an impressive amount of work in an age when many designers seem happy to provide as few hotspot descriptions as possible. 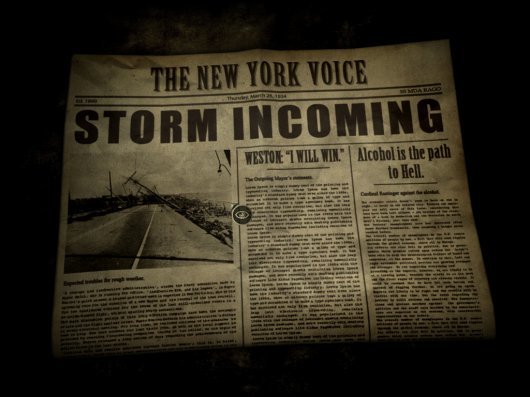 You'll not want to come in expecting much visually, however. Though the backdrop of a gloomy city doesn't allow for much visual flourish, better things have been done with the Wintermute engine before. One port scene makes good use of a rain effect, but the backgrounds are usually fairly bland and dark—whether walking the city street, scouring the hidden spots on the port, or exploring a dimly-lit museum—and hotspots are often very hard to see without the absolutely necessary hotspot indicator. The character close-ups look good, but faces remain static throughout a conversation and the game really has no animation to speak of other than the awkward walking of Del Nero, who doesn't always look naturally integrated with the 2D background art. Part of the old-school storytelling style is that the game's interludes are told through narrated still frames.

Despite its languid pace, Face Noir has good storytelling sense, and breaks up monotony by inserting multiple sequences that allow you to play as a different character integral to the story, proceeding through events earlier in the day. There are some really neat Memento-style revelations, where your actions as this alternate character create a reality that you've already played through as Del Nero. You'll get a sense right away that the game is interested in this type of story framework when the introduction itself exposes the events of the final ten minutes, and then rewinds to let us understand how we got there.

Fortunately, the multi-character flashback framework is infrequent and not a disorienting focus point; overall the game is firmly rooted in following Jack Del Nero's straightforward pursuit of a mystery. Carefully read the clues you find and exhaust dialogue trees—and keep clicking that hotspot finder to find what else you can interact with—and you'll proceed through this linear mystery in a matter of ten hours with no puzzles to be particularly worried about. Be advised though—the end of those ten hours is a big, fat "To Be Continued" that provides no closure at all, but does promise a Face Noir II in a decisively different setting.

Such a teaser makes me nervous, to be honest, because the thing I enjoyed the most about Face Noir is its delightful setting. You can't possibly be an adventure fan who's read a Philip Marlowe novel without wanting to play an old-school adventure that takes the methodical pacing of Lost Files of Sherlock Holmes and places it into a hard-boiled film noir setting. Though not perfect, this game takes itself and its Depression-era private eye sensibilities seriously and does enough good things with its music and writing that the occasionally weak voice acting and graphics can be overlooked. Here is a game that is surprisingly capable of holding its own in the "adventure noir" field, and is highly recommended for fans of a good mystery—as long as you are okay with only getting half of the mystery this time around.

Face Noir is a genuinely entertaining adventure for fans of private eye mysteries, and a solid debut for a promising developer, even if it’s only half of a story.

GAME INFO Face Noir is an adventure game by Mad Orange released in 2013 for PC. It has a Illustrated realism style, presented in 2D or 2.5D and is played in a Third-Person perspective.