The year is 1953, and scientist Lewis P. Higgins is on the verge of a revolutionary discovery, an invention that can manipulate weather. Looking to prove his theories, Higgins begins an experiment that yields startling results. It also attracts the attention of an off-world alien species, which launches a series of devastating attacks across the globe without warning, leaving the human race to respond with their very last option: a nuclear strike. Indie developer Midian Design's Doc Apocalypse throws players into this chaotic post-apocalyptic world, in which Professor Higgins (aka The Doc) has the means to reverse the fate of the planet, but must find a way to reach his offsite laboratory in an attempt to change time itself. The ensuing adventure weaves a tale of intrigue and conspiracy, as Higgins learns he is not the only player in these events and that things may not all be as they seem. It's a fun premise full of complex ideas, many of them over-the-top and reminiscent of science fiction B-movies, though at times it can seem overly convoluted.

The opening scene shows the Doc speaking with his wife Elzebeth Tesla (niece of the famous Nikola Tesla) over a black and white video intercom via a secure underground bunker. Soon after, things begin to go horribly wrong. After witnessing the tragic events unfold around him, Higgins assumes that his experiment is to blame. Fortunately, he has a few tricks up his sleeve with his wife and son holed up in his offsite laboratory; they preside over a time machine to which he has the only key. All he has to do is wait for the radiation to clear and make his way to the machine to warn his past self about what is to come... Or at least that’s what he thinks.

After eight months of hibernating, radiation levels fall low enough to venture outside, and this is where our adventure truly begins. Players open the door to a world utterly destroyed, your house all but flattened and the sparse remains of your car now being used as someone else’s residence. The Doc must navigate his way through and out of the small town of Serenity, which is no longer remotely true to its name thanks to the nuclear holocaust. With most of Serenity’s surviving inhabitants on the verge of madness or mutated due to radiation fallout, you will need to watch your back whilst acquiring transport, which is no small task in a world of scarce resources and even fewer friendly faces.

As you progress beyond Serenity, the game takes you through a number of different locations, including an underground bunker in Area 51, a secret military dig site located in the North Pole, and a series of mysterious locations scattered through time with the use of the Doc’s machine. During some scenes you assume the role of alternate characters, allowing you to control multiple protagonists at the same time. This usually involves Elzebeth Tesla (Beth) and the Doc’s son Tobias (Tachy), utilising them in tandem to solve problems. 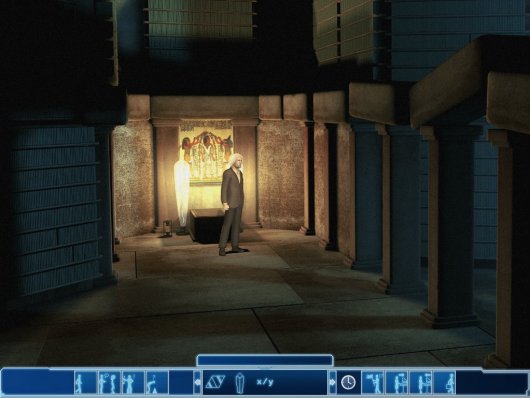 There are a number of unique and interesting supporting characters as well, most of whom are encountered in the early stages. Serenity plays host to one or two mutants and a number of town members suffering from varying degrees of radiation exposure. One of the townsfolk you interact with a lot with is Sherriff Grimes, who has lost all tangible authority over the county. To top things off, his son has become unbalanced and blames him for an accident his mother suffered and now stalks his father throughout town, trying to kill him whenever he has the chance. The Sherriff himself is suffering from terrible radiation sickness and has developed a severe orange skin tone. He’s become obsessed with solving every outstanding crime on the books, but his detective work is stifled by his son’s aggression towards him. Elsewhere there is a mutated boy with a metal girder that has somehow been fused with his arm, who serves as muscle for a local trader in town. His abnormal growth and girder have given him a misguided sense of loyalty towards the trader who’s taken him in, and with little or no ability to distinguish between right and wrong, he is someone you want to keep on your good side.

The crux of the story begins to unfold when you learn of a mysterious government called the New World Order, which quickly formed after the cataclysmic events. Their rise to power has been rapid, headed by an anonymous ruler only known as The Most High. The Doc’s first encounter with the New World Order happens to coincide with his leaving Serenity, when he learns of his wife and son's capture at their hands. Bearing a striking resemblance to Nazi Germans, the new authorities appear very interested in Higgins's bunker in Montauk and have made arrangements to have its contents shifted to their new base in Area 51. In the meantime, they have a small job for the Doc in the North Pole. 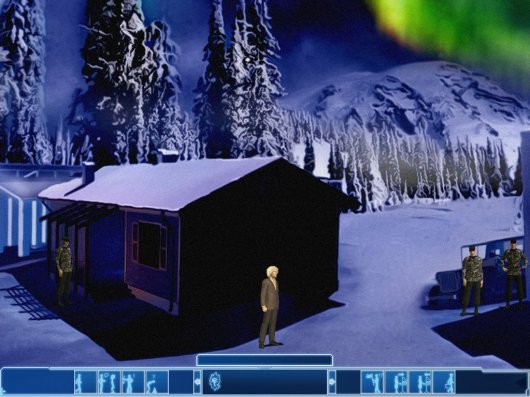 Visually, Doc Apocalypse uses a minimalist art style reminiscent of adventures produced in the late '90s, its pre-rendered graphics lacking fluidity in animations and effects. However, it's enhanced by a visual overlay that gives the impression that you are watching an old television with patchy reception, which helps smooth over some graphical weaknesses. The artwork is well designed and complemented by an appropriate colour scheme throughout, as dark greens and grey tones highlight the wasteland environment, with considerable use of diffused golden yellow and velvet blue where appropriate.

Not everything works quite as well: the dimensions of certain characters seem off (Elzebeth's arms are a little long, with rather large hands), fonts have a thin, square electronic look which is not ideal for reading, and occasionally some of the character portraits during conversations look like a single model merely replicated and altered slightly. Occasionally there are background elements that look out of place as well, with skylines and certain objects that appear jarring compared to the rest of the environment. Such flaws are minor though, and the overall look, though simple, is generally consistent, clean and stylish (in a post-apocalyptic sort of way), marking a significant improvement over the developer's previous titles. There are also several cinematic cutscenes which are just as nicely executed, though displayed in a lower resolution than the main game.

Sound-wise the news is worse. Doc Apocalypse offers little in the way of effects and no voice acting. The background music plays on rotation, using piano, flute, synth and a number of other samples to produce an array of ambient and eerie tunes throughout. This soundtrack is solid in its own right, but it seems a little forced and generic rather than subtle or inspired, feeling detached from the action and drowning out what sound effects do exist. It’s hardly a surprise that there are no voiceovers (with the exception of a radio broadcast early in the game) in an indie budget title such as this, but the omission will nevertheless be an issue for some players.

The interface is a little different from previous Midian games, and is now very intuitive. Everything is located at the bottom of screen, with instant access to player commands and inventory. The main functions of walk, talk, use and examine are also available by clicking the right mouse button to scroll through them. All command icons and inventory are portrayed in a futuristic blue fluorescent light, giving the interface an electronic look. Two features missing from the game, however, are an autosave and hotspot locator. The autosave function isn’t particularly essential, as you can’t die in this game. A hotspot highlighter, on the other hand, would have proved useful at times, as there are at least a couple of puzzles that require some pixel hunting which are painful to say the least. Fortunately, these occasions are few and far between. 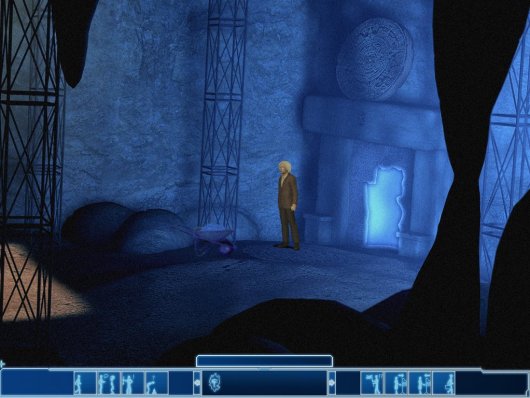 Speaking of puzzles, the obstacles in this game are a mixed bag. In contrast to the frustrating pixel hunts, there are some clever puzzles that require code breaking and lateral thinking to solve, while the rest lay somewhere in between in terms of quality. Most puzzles are inventory-based, and you progress largely by talking to the many characters, who usually reveal your next location, an item to find or objective to complete. The vast majority of solutions are relatively intuitive, but a few are frustrating due to a lack of necessary clues, solved only by stumbling over the answer. The many puzzles that do make logical sense offer a degree of satisfaction once completed, the last few puzzles before leaving Serenity in particular. Unfortunately, there are some roadblocks that will halt your progress until you complete certain dialogues or inquire about particular people or situations.

What helps offset some of the more frustrating puzzles is a very good storyline filled with interesting, complex ideas and decent pacing throughout. There’s about 6-8 hours of game time here, with plenty to keep you busy as you play. What really stand out are the detailed backgrounds of the characters and the portrayal of what might be considered a 1950s sci-fi B-movie-era story, synthesized here into a new and unique formula. There are a few nods and winks towards Doc Brown from Back to the Future, both in terms of the main character's looks and his ability to traverse through time, plus numerous other sci-fi references such as Area 51, historical landmarks such as Ziggurat of Ur and the Chichen Itza, and even an Alien Mothership. But despite the obvious pop culture influences, there is more than enough originality here to deliver a tale that is unique in its own right.

In many ways, this is a difficult game to sum up. There are flaws here and moments of frustration there, and its simple production values surely don't stand out, but there is definitely some diamond to be found in the rough. It shines brightest by bringing together many interesting sci-fi story threads, a variety of memorable characters, and enough decent puzzles to overshadow the bad ones. Though it lacks both eye candy and voiceovers, on balance I feel happy to recommend the game, especially as a budget title available from the developer's website. It won't dazzle you with style, but if you’re looking for a quality indie adventure, purchasing Doc Apocalypse is a decision you don't have to worry will blow up in your face.

It’s not without its rough edges, but Doc Apocalypse is an intriguing, original title that’s well worth your time if you’re looking for a budget sci-fi indie adventure.

GAME INFO Doc Apocalypse is an adventure game by Midian Design released in 2012 for PC. It has a Illustrated realism style and is played in a Third-Person perspective.

What our readers think of Doc Apocalypse 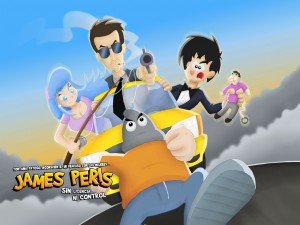