We get a small commission from any books sold.
All Bitmap Books
Written by
Reece Warrender — July 5, 2012

Most series have a tendency to drop off after an impressive debut once the novelty wears off, but in Starved for Help, Telltale manages to not only maintain The Walking Dead's strong start, the second episode may even surpass it, with a script that is easily as compelling as before, an already strong cast of characters further established, and a near total absence of episodic asset recycling. Having already cemented themselves as the kings of episodic adventuring, Telltale seems poised to make The Walking Dead their most successful series to date.

This instalment opens up with Lee and a newcomer named Mark hunting for food in the woods near the motel where the survivors have holed up. Three months have passed since the end of the last episode, and times are hard, not due to zombie invasion but scarce food supplies. A scream promptly averts these concerns as you run towards the source, prepared for the worst. Nearby you discover a teacher caught in a bear trap with two students attempting aid, the shambling infected closing in behind. Do you help save the man, whose leg is mangled in a trap that has no intention of letting go, or do you flee and selfishly save yourself? Barely five minutes in, I was already fully immersed in the struggle to make a decision between running away, cutting the man’s leg off, or finding another way. Opting to be the hero, I pull out Lee's trusty axe and begin to chisel away at the trap. But it's not as easy as that, and unlike most adventure games, success isn't guaranteed. And even "success" comes with a very heavy price.

The Walking Dead continues to handle moments such as these beautifully by not only putting you in dire situations and forcing you to make difficult choices, but by giving them a great sense of weight and significance. Telltale have done a fantastic job of developing the characters so that you can relate to them emotionally, and thanks to the relentless, merciless struggle for survival, you're aware that your decisions can result in the death of those close to you (and maybe even yourself). It's rare that a game can make you feel that so many of your decisions have such substantial consequences. 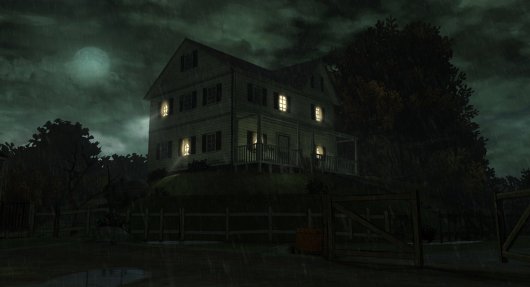 Not all choices are life-and-death, of course.  It's up to you to decide who gets the day's scant food rations, but before your decisions cause too big a rift, your group encounters a family of survivors holding out at a nearby dairy farm.  Deciding to trade gasoline for food, Lee and a small contingent venture from the safety of the relative motel.  The dairy farm seems untouched and ideal, completely protected by an electrical fence.  And yet there are subtle hints that give you an odd feeling of discomfort around your newfound neighbours, making you continually question whether there’s an actual need for concern or if it’s simply your own paranoia – rarely helped by Lilly and Kenny, who further verbalise your inner indecisiveness.

The family at the dairy farm add to the existing diverse cast of survivors and increase the emotional complexity, especially when you encounter a nearby bandit group who pose an entirely new threat. Mark, the newcomer to your group, is briefly explained as having arrived with a trade of food supplies in the three months between episodes. He's a very likeable character, but the introduction of such an important new character into the core group between episodes feels rather cheap, and I hope it's something Telltale don't make a habit.

The varied but believable personalities combine brilliantly with Lee's choice-based dialogue options, and I frequently found myself playing to different personality traits depending on who was around to witness my decisions. The best example of this is with little Clementine. Whenever she's present, I can’t help but feel the need to be a positive role model, and whenever I forget, her looks of disapproval or frightened emotions remind me vividly, breaking my heart in the process. 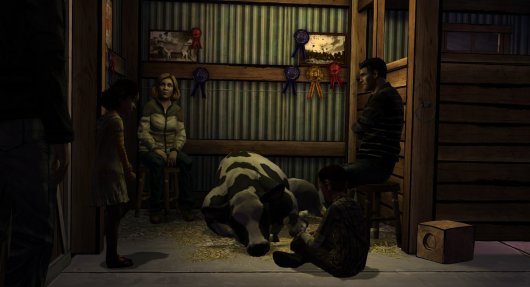 Where the first episode focused on introducing the core team and (rather murkily) establishing Lee's history, the second instalment leaves many of them behind at the motel, while Lee and a couple others head off in search of more supplies and a safer location to call home. This results in a whole new wave of danger from living and undead foes alike,  providing a quicker pace and sense of dramatic action to the story.

As before, gameplay is often focused on dialogue choices, letting you decide the path the story will take and shape the opinions others will have of you through timed multiple choice selections. This extends to item interaction, such as determining which characters you will give food to when you don't have enough to go around. There is some traditional puzzle-solving to be found, but it rarely requires much thought, the solutions having clearly laid steps. One such example comes from a locked door which Lee automatically inspects and points out that you can unscrew the lock off... not surprisingly, one of the few interactive objects nearby is a toolbox. While a greater challenge would certainly be appreciated, at least none of the puzzles are made unnecessarily illogical this time around just to artificially ramp up the difficulty.

The oft-dreaded Quick Time Events make a reappearance, but they never require too much dexterity, serving mainly to raise tension in the action sequences.  You'll have limited time to save yourself from danger, such as pushing away a zombie by repeatedly pressing the correct key (or gamepad button) or navigating Lee between objects of cover when hiding from a threat during a timed sequence.  You may die once or twice before you figure out the proper sequence, but you're instantly restored to a moment soon before death, allowing you to try again. 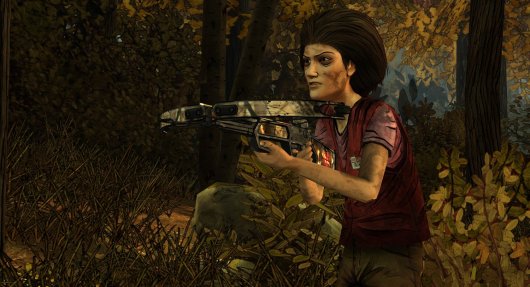 The game's engine remains somewhat problematic on some PCs, with occasional stuttering and delays whenever the action requires frequent camera movement, which in turn can cause the odd audio hiccup. On the flip side of the technical shortcomings, I was surprised by how well Telltale have handled lighting this time around, making brilliant use of night to add tension and drama. One of the episode's most powerful moments occurs as you enter a building in the darkness, the crack of lightning in the background silhouetting someone through the netting of the front door. You genuinely feel the danger of nightfall and long for the safety of daylight to return, as you find your vision reduced and your hearing distracted by the storm.

Overall, the visual presentation absolutely nails The Walking Dead's comic book inspiration, the cartoon style never detracting from the seriousness or sense of danger. Character expressions are excellent, complementing the strong voice acting superbly. The artists haven't shied away from gore, and the distinctive background noises keep you on edge. The sparse, subtle background music only helps maintain the taut atmosphere.

In avoiding all the usual episodic sequel pitfalls, Starved for Help manages to maintain the same qualities that made the first episode so brilliant whilst providing a substantial new scenario that spins the story in another direction, once again driven by key player choices to determine the outcome.  The episode closes with another fantastic cliffhanger after about 3-4 hours of gameplay, followed by a brief glimpse of what's to come next time. As before, you're also given a breakdown of the key choices you made in order to compare your decisions to those of other players. I'm eagerly anticipating the next instalment of The Walking Dead, and cannot wait to see where the story leads the group next.

Starved for Help more than fulfills the high expectations set for it, maintaining the tense immersion and bold story development of its predecessor.

What our readers think of The Walking Dead: Episode Two - Starved for Help

A different game in comparison with other ad games that I've played.I think this difference is because of having the power to make totally different decisions in the game.Only the Fahrenheit was similar to this... Read the review »

Walking Dead - Episode 2 As an interactive experience set in this world, it hits all the right notes. The world feels authentic, the characters interesting, the art stlye adds to the comic feel and... Read the review »