Adventure games by Tale of Tales

"Games are supposed to be fun."

This is a statement I've heard countless times. Sure, the definitions of "game" and "fun" can be hazy at times, but there seems to be a general sentiment among aficionados of video games that one should expect some kind of enjoyment from the experience. Yet, when I think about the myriad novels, movies, comic books, and in some cases, games I've enjoyed in the past, "fun" feels like such an inadequate descriptor. While I certainly do enjoy my share of fun, there's such a panoply of other emotions that describe the richness of human experience: anger, hope, fear, sorrow, pensiveness, infatuation, and others too numerous to list. Works of art that explore the complexity of human emotion are the ones I tend to find most memorable.

It seems to be common knowledge that most video games are emotionally superficial, though many an indie developer seems to be willing to buck this trend. Auriea Harvey and Michaël Samyn of Tale of Tales have semi-recently released The Graveyard, a poetic experiment touted as more of an "interactive painting" than a game. This eschewing of the term "game" is interesting in that it seemingly frees the developers from the constraints that come with that word – there are no true goals, so to speak, and above all, it is excused from the requirement of being "fun". 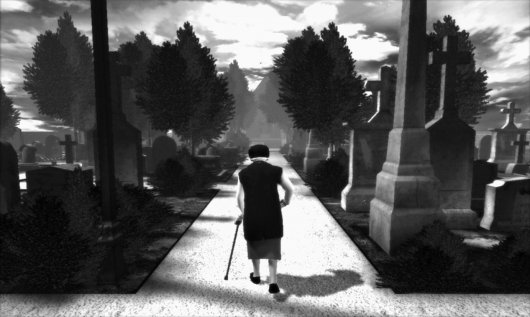 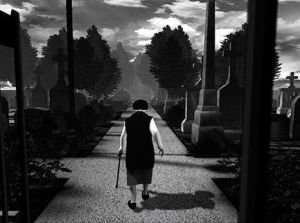 The Graveyard is most certainly not fun at all. For one thing, as the title suggests, it takes place in a graveyard, and furthermore, your avatar isn't your usual fit and able-bodied hero or heroine; she's a decrepit old lady who hobbles around excruciatingly slowly with the help of a cane. A fixed camera only allows her one real path to follow – there are side paths, but as I figured out very early on, trying to explore them gets you nowhere. Once you follow the main path to its destination, you get to a bench, she sits down, and a slightly silly, rather lengthy Flemish song about life and death begins to play, accompanied by a small montage of images representing the woman's memories. The song ends, you just as slowly walk back to where you started, and that's it.

It's obvious that the developers didn't want me to have fun. I was expecting that. And yet, what I did feel seems to be at odds with what I think the developers intended for me to feel. From what I've gathered, I'm supposed to feel empathy for the old woman, by virtue of "being" her. Instead, what I felt was irritation and impatience. I didn't feel like I was her so much as I felt like I was trapped walking behind her, reminding me more of a comedy sketch than of poetry. Okay, I may sound more than a little bit ageist in that last little bit, but in truth, I actually was hoping for some kind of a revelation about old age and wisdom that would turn our cultural bias towards youth on its head. I wonder, for instance, if I could have empathized better with the old woman's mobility problems had she been walking at a seemingly normal pace while everything else around her went by unnaturally quickly. 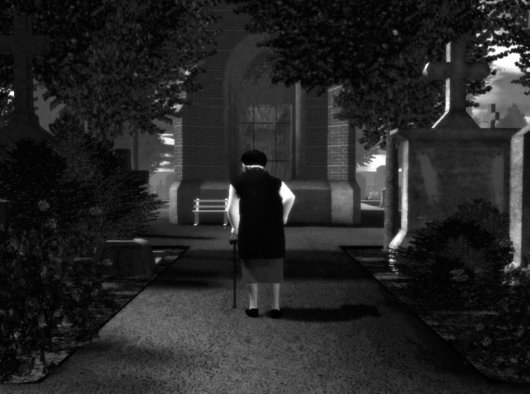 What I find even more unfortunate is that I wanted desperately to have a conversation with this old woman, to find out who she was, what she lived through, and what she would say to a young whippersnapper like me. I couldn't. The game only allowed me to follow her, and as a result, showed me barely anything of what was inside her head, save for a few snippets in the aforementioned Flemish song (which I honestly didn't really like all that much, anyway). And what I did see was nothing new; yes, the portrayal of an elderly woman as physically limited and nostalgic about the people she's lost over the years can apply in a very general sense, but it's rarely the case that I find such generalization interesting. I believe the story told through the gameplay would have been far more poignant and artistically meaningful if Harvey and Samyn had told me more about a specific old woman, and allowed me to interact with her in a manner deeper than merely following.

There's a $5 "full" version of this game that adds the extra feature of the old woman potentially dying in the middle of the game, which claims to offer a radically different emotional experience therein. I myself have not played this version, and yet I'm skeptical as to how emotional I could possibly get about the death of a slightly annoying elderly woman I don't feel like I really know all that well. Repulsed? Relieved? Indifferent? Who knows? One thing's for sure: what I saw of the freely-available version was hardly enough incentive for me to find out.

In any case, it's worth admitting that I admire Tale of Tales' willingness to use the medium of video games to convey emotions other than "fun". In fact, I wholeheartedly encourage other developers to do the same – we can certainly do with more "art games" in this comparatively superficial landscape of ours. The fact that The Graveyard was, in my eyes, an imperfect experiment in some areas by no means implies that we should simply go back to killing things and solving Sudokus. On the contrary, the more times we grant ourselves the courage to fail, the more likely it is that we will one day discover success.

What our readers think of The Graveyard