We get a small commission from any books sold.
All Bitmap Books
Written by
Merlina McGovern — August 8, 2012

As any Myst fan knows, open a book and it’s like you’re opening the door into a new world. In ERS Game Studios’ casual adventure Azada: In Libro, you’ll open such a door into not one, but three gorgeously rendered fantasy worlds. As you search for a dark magician bent on destroying these literary creations, you’ll have fun exploring vividly imagined locales filled with activity and animation. Unfortunately, for a game about the wonder of books, a forgettable tale serves as the backdrop for its wide variety of puzzles, feeling more like a short story stretched out than a fully novel adventure.

Let’s turn back the pages a bit first. The game begins with an intriguing animated opening. A strange man in wire spectacles with slicked back hair is in your office, revealing that you’ve just received a very large inheritance. The catch? You must travel to Prague to receive it. Curiosity piqued, with no idea who could be leaving you anything, you board a beautiful steam locomotive. The train travels through a bucolic countryside, white steam puffing from its black smokestack. As you slowly pull into an Art Deco-styled station and walk up to a gorgeous stone townhome, this is where the stranger’s helpfulness ends. You’re on your own from this point forward to discover why you’re in Prague, beginning with how to even enter the house before you.

After finally gaining entry, you walk into an opulent salon and are met by a distinguished butler. Most butlers wait on you hand and foot, but do you know any that rip their faces off and present themselves as someone wholly different? This butler turns out to be Titus, one of three guardians of Azada who watch over three separate worlds (he’s the same adventurer in need of rescuing in the two previous Azada games). As it turns out, the inheritance note was an elaborate ruse to get you to Azada, a mysterious world hidden in the pages of a book and rife with puzzles. Titus informs you of his uncle, a man with dangerous powers who is threatening to destroy and rule over Azada. This power-hungry man has destroyed or incapacitated the residents of two of the three worlds and captured their guardians. As the last remaining guardian, Titus is looking to you to find the missing guardians and the keys they hold in order to imprison his evil uncle. 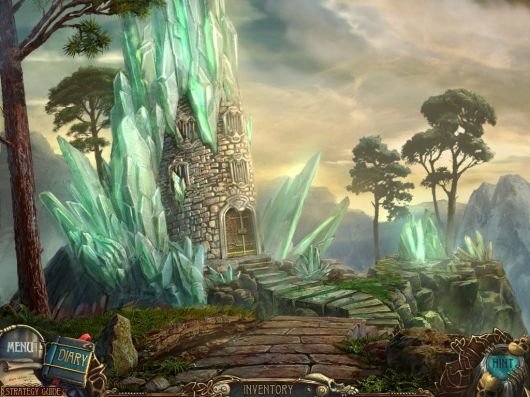 You’ll immediately find ERS’s signature art style on display; each scene is sumptuously hand-painted and highly detailed. In a quiet room occupied by a single skeleton, you’ll see a faint rainbow halo encircling the dead man, created by light filtering into the room. In the first world you visit, you’ll seek ways to banish creatures made of smoke who don’t harm you, but won’t let you pass by them either. Strangely, they look like demonic octopi more than anything. A second fantasy world is filled with crystals, where all of the creatures have been turned into copper and frozen in place. Why? Well, you’re never really given a reason other than the fact that Titus's uncle wanted them out of the way. Why he chose to freeze them rather than vaporize the flesh from their bodies as he did in the first world isn’t exactly clear.

Home to “fairies” that appear to be short sparkly dwarfs with wings, this second world enlightens you to the fact that before he could complete his plans of domination, the uncle was imprisoned in Azada’s third world... which is hell. Literally. Skulls are everywhere. The skies are hot and lit fiery orange. In a dark alcove, you hear the slathering grunting of an enormous, and very hungry, rat. Bright geysers of molten lava spurt against the sky. Skulls swing on stakes. It’s an aesthetic that’s heinous and beautiful at the same time: hot colors splash against the background as you stumble upon MC Escher-like decayed buildings held together by dinosaur bones.

These fantastic worlds are brought to life by a variety of lively animations. Click on a crab to harass it. A rocking chair with a deceased occupant sways when you push against it. A slight breeze ruffles the remaining feathers of a half-robotic bird. A human skeleton appears to have lost his life recently, his pipe still smoking. Some of the animations are just gorgeous: If you try to open a locked elevator behind a gate, bolts of lightning crackle out. An attempt at another elevator with the inappropriate key results in a sickly greenish smoke slowly pouring out of the top in a sinuous motion. You’ll encounter an amazing multi-headed gargoyle carved in stone, and each head has animations characteristic of the element it represents – one shivers as if bathed in the wash of a wintry wind, one blows fire, another cries rivers of tears. 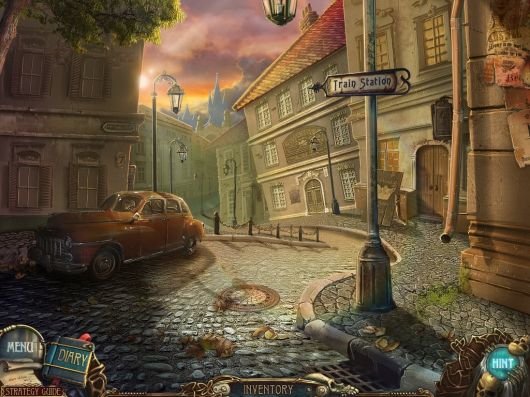 Rather fusty music filled with harps and clarinets provides a soothing if undistinguished accompaniment part of the time, fading completely into the background for much of your journey. This leaves layers of ambient sound to increase the immersiveness of the settings, like the small grunting of a creature hiding beneath a trolley, with winds howling through desolate alleyways. While there is voice acting, you won’t hear much of it, as there just aren’t many living beings that you’ll meet along the way.

As you make your way through towns where everyone is either dead or incapacitated, you’ll have to carefully investigate your surroundings, which involves a wide array of inventory puzzles. You can’t be especially squeamish, as you’ll have to move skeletons or work around frozen people to find important objects. There are some gross scenes, including one where you spot an enormous snail squelching down a door, and you’ll need to find items that will help you remove the snail and its mucus. Some puzzles are quite logical, such as looking for milk for a poor kitty, but sometimes you’ll be asked to get things that don’t make logical sense, like looking in a tropical fruit for a ... strange grain? And what the heck is a snake doing guarding knitting needles or a wrench hanging out in the hell world? 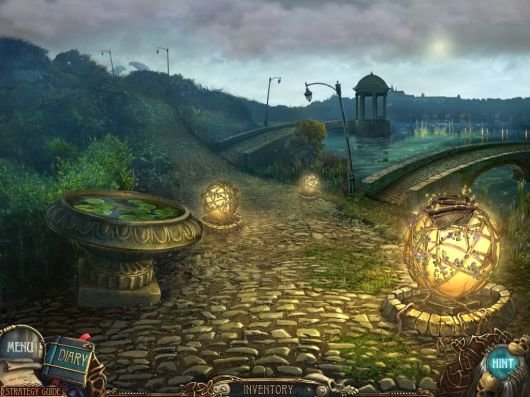 But we can’t talk about the Azada series without talking about logic puzzles. Previous games put these types of puzzles front and center, and the story was mainly a framework on which to hold them together. Here the worlds are more fully fleshed out and the puzzles a bit better integrated into the environment, without any of the usual hidden object filler scenes of so many casual games. Rather than solving a certain number of puzzles to prove your problem-solving prowess like its predecessors required, In Libro's puzzle solutions help you overcome actual obstacles in the game world. If you need a chain from a bike, you’ll have to get the chain fixed first by placing links together according to their color. Instead of a padlock, a mechanical doll greats you at a front door, and you will have to dress her and place her arms and legs in the proper position to gain entry.

While most of the puzzles, including gear connection, matching puzzles, jigsaws, and many, many more, are fairly simple, they are also fun to play, such as a color drop puzzle where you have a limited number of moves to turn an entire field of water droplets the same color. The brilliant environmental animations make their way over to the logic puzzles as well. Solve a puzzle involving a stone fish, and upon completion it will ripple to life and jump into a river.

The puzzles almost always give you an indication when you are heading in the right direction (tiles will light up, pathways will glow, etc.). But if you’re stumped even with these indicators, you’ll have the option to skip them. There are three modes to choose from, the casual mode featuring shorter charge times for skip and hint buttons. The hint system only shows direction if there is something to do in the current scene; it will just say there is nothing to do in that area if there are no current interactions available. Each world is self-contained and you must complete one before traveling to the other, so while you don’t have a map, backtracking is minimal. 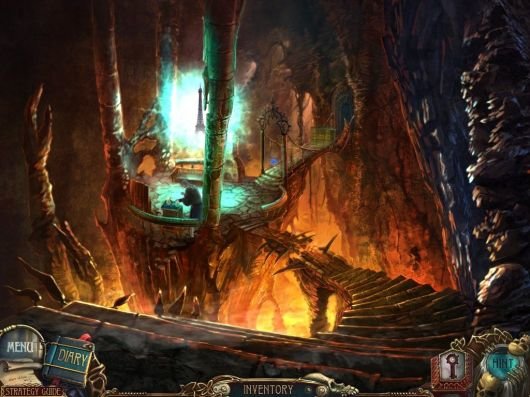 While Azada: In Libro makes great strides past its predecessors in the integration department, the story on its own is rather forgettable, with little insight into the characters involved. The tale of Azada and its three magical worlds and the evil magician trying to overpower them is still essentially just an excuse to journey for four-plus hours through these beautifully rendered fantasy lands and solve lots and lots of puzzles. Which is certainly entertaining, just not particularly relevant to the plot.

The story, thin though it is, resolves itself quite nicely in the main adventure. The bonus chapter in the Collector's Edition fleshes out a concept only briefly touched upon originally: the idea that somehow Azada and the real world are linked. The uncle's evil work in Azada has leaked into our world, and you’ll be tasked with rectifying the problem. This extra scenario provides about half an hour of play time while you visit several new scenes, including a very different Prague from the one you encountered the first time around, with cobblestoned streets lined with retro cars from the forties. Reality quickly devolves into even stranger sights, including griffin guardians with piercing eyes (griffins who, rather ridiculously, are quite ticklish).

The Azada series has always anchored itself in the realm of books even as its focus was mainly on the puzzles. There's certainly more of an attempt to integrate the challenges in a dynamic adventure this time around, but a more engaging narrative would have made for a more memorable gaming experience. Despite its shallow storyline, however, the worlds you are drawn into are gorgeous and filled with fantastic animations and plentiful, if relatively easy, logic puzzles. Once there, the beautiful worlds of Azada: In Libro will keep you figuratively turning the pages; maybe next time, a thrilling story will further compel us to do the same.

Though light in story, Azada: In Libro‘s beautiful worlds and wide variety of puzzles make for a satisfying chapter in the casual fantasy series.

What our readers think of Azada: In Libro