We get a small commission from any books sold.
Written by
Stuart Young — October 19, 2009

Robots behaving like humans are cute and funny. I don't know why this scenario generates such a response in us – maybe anthropologists or geneticists have a theory. Amanita Design, however, grasp this fact instinctually, as displayed by Machinarium, their latest miniature masterpiece which is overflowing with dozens of delightful little robotic characters.

The game is set in a city made of pipes, tubes, and rusting metal edifices. Despite the scrappy aesthetic, every decaying detail is carefully orchestrated and designed, resulting in a surreal, beautiful world inhabited by a cast of automatons that make it feel like a robot fairy-tale. Our nameless mechanical hero is first seen crashing in the outskirts of the city, expelled for reasons unknown, and starts the game looking for his stray pieces and putting himself back together. He then must make his way back inside the robot enclave, where he uncovers a heinous plot by a gang of criminals to bomb the tallest tower in the city.

Despite being entirely wordless, the story achieves a surprising degree of complexity and is never confusing. Players eventually learn all about who runs the robot city and why our protagonist was in the crash in the first place, plus solve plenty of problems for the city’s inhabitants, a lot of them caused by the thuggish criminal ring. There's even a love plot, in which the robot hero must rescue his girlfriend from servitude at the hands of the criminals. The characters converse telepathically, with scratchily animated thought bubbles for the benefit of the player. These living pictograms are beautifully rendered, very funny, and one of many highlights in a game that is almost an embarrassment of visual riches. 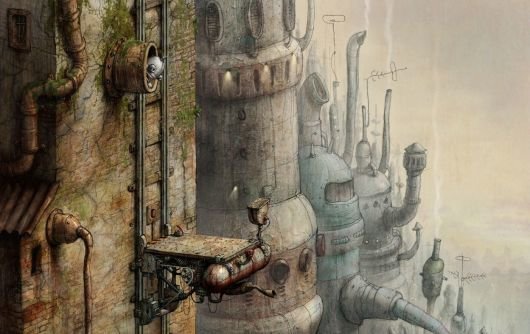 The game’s distinctive style of art and animation is evident from the opening cutscene. Graphics are two-dimensional, and created primarily from hand-drawn sketches using a soft, moody palette of de-saturated colours. To animate the characters, these picture-pieces are moved like paper dolls to achieve motion. This is, of course, a rather drastic over-simplification. Any jerkiness or inelegance you might expect from this technique is negated not only by the fact that all characters are robotic, but also by the array of smoothing, motion blur, and distortion effects used by the animators to create a seamless, cohesive world. Machinarium doesn't really look like any other game, except maybe Amanita's own previous Samorost series, but here the "living decoupage" style relies entirely on original drawings, not a hodgepodge of photography and artwork. The style creates a surprising sense of depth; all the striking colours and layering create a tangible world in high resolution.

The best part of the visuals however, is the sheer wealth of animation. Whereas many adventures skimp and save in this area, overextending their resources, Amanita packed each scene with dozens of graphic details. Backgrounds feel alive: water drips from fountains, lights flicker, vents steam. Visiting Machinarium is like visiting a place, not a series of backdrops. For example, at one point you are able to open a prison cell and solve a puzzle to help the inhabitants escape. Inhabitants, plural. It would have been just as functional in terms of gameplay to place one robot in the cell. But here there are two. Why? Because it's a more visually arresting, humourous image to see the pair try and sneak past the guard. The developers didn't have to go the extra mile, but I'm glad they did.

Another example comes from the protagonist's idle animations. In many games, when you don't interact with the character for a few seconds, they perform a short animation; scratching their head, tapping a foot, etc. Here, there are about half a dozen idle animations, all amusing, and ranging in complexity from simple arm-folding to elaborate thought-bubble daydreams. Like the rest of the game, these are gently, whimsically funny. 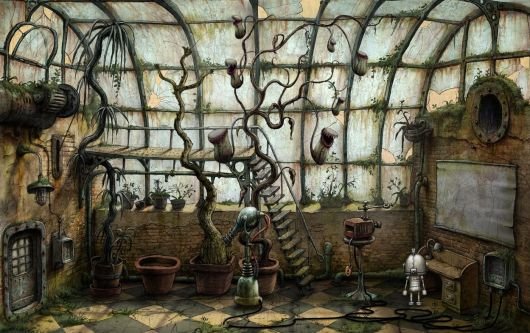 Our robot hero doesn't just stand around, however. On the contrary, you'll need to use his abilities in creative ways to triumph in this bizarre environment. By clicking and dragging his body, you can change his height between three basic states; tall, normal, and crouched. You'll have reason to utilise each of these different states throughout the adventure, as he can only interact with the things within his reach. Whilst it may sound like a simple feature, the way the height changes are used are consistently inventive. The obstacles our protagonist faces are inspired by the heritage of traditional adventure games and logic puzzles, but with neat Amanita twists.

The character has an inventory (he swallows items and keeps them in his torso, offering several more examples of animated diversity), but although it is used extensively, this is not an inventory-dominated game. What the developers excel at are environmental puzzles that work like a contextual Rube Goldberg machine. The player modifies the landscape (programming a console, moving a wire) and can interact with something or someone (say, a lever) to "run" a scenario and watch the results, which can be adjusted and repeated as many times as it takes to achieve the desired outcome. At one point, for example, you need to catch a robotic cat. There's no need to bring along any inventory, but the steps you need to follow are both pretty complex and wonderfully comical. At least six separate steps are required to complete it, and the interactions between our protagonist, a robot electrician, the cat and a mechanical bird provide the basis for a cute bit of physical comedy. 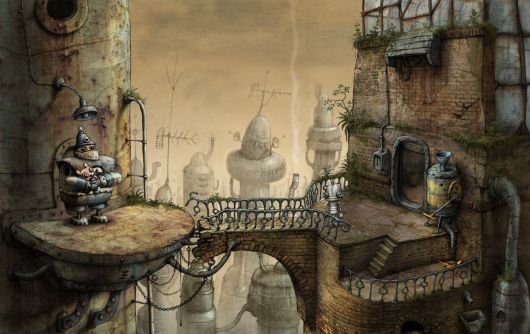 It's this kind of depth and variety that make such scenarios a lot of fun to play through, but there are other types of gameplay, including a few arcade-style minigames. You'll need dexterity for some of these, but they are not too difficult, and allow you to re-try as many times as you need. There are also a lot of re-purposed traditional "mechanism" puzzles: sliders, tower-of-hanoi-esque challenges, water flowing through pipes, and so forth. These are generally the weakest part of the gameplay, as they aren't as original as other puzzles, but even so, most have little quirks to set them apart from past variants. Look at mechanisms closely, because a lot of hints are found written as glyphs on the puzzle itself.

If you can't reach the solutions yourself, don't panic. Machinarium comes with one of the best in-game help systems ever to grace an adventure. If you need a nudge in the right direction, clicking on a thought-bubble icon makes the character "think" a hint for each screen. If that's not enough, there's a beautifully illustrated (in a comic-book style) walkthrough tome for you to open, which only shows the solutions relevant on each screen. You have to complete a quick side-scrolling shooter game to unlock the book, though, which might alleviate some of the guilt of cheating!

You won't be hopelessly stuck often, though. The difficulty curve in the game is pretty much perfect, starting with single-screen puzzles, then moving up to two, three, five screens and finally a modestly-sized city to explore and discover freely. You'll find maneuvering and interaction simple and intuitive. Movement is somewhat limited to pre-set nodes on the floor where the robot can walk to, but this doesn't feel strange or make any functional difference to how the game is played. Unlike in Samorost, the player doesn't have omnipotent fingers, as the robot interacts directly with the world. Machinarium uses a single-button interface, but the mouse cursor changes to show possible interactions over hotspots, which is very helpful. Inventory items are retrieved from a hidden bar that appears by rolling over the top of the screen, and save functions are handled by a similar bar appearing at the bottom, which is all done easily and efficiently. 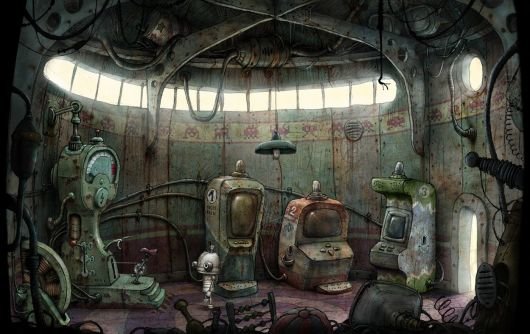 Unfortunately, the game was made in Flash, and I know this because an accidental right-click (and this will come naturally to adventure fans trying to de-select the current inventory item) brings up an intrusive and jarring Windows settings menu. I imagine the game’s developers can't change this, but I do wish Adobe would allow it to be disabled. The upside of using Flash, presumably, is the ease of development and the silky-smooth support for vector animation, re-scaling and the like, and the engine is rock solid. Well, mostly solid. I experienced one problem where the character got stuck and couldn't move, but thankfully the game autosaves as well, and this hiccup was amended by quitting and entering the game again. There was also a very minor graphical glitch involving a white line flickering for a frame or two at the side of moving graphical elements; I encountered this twice.

There isn't a lot else to criticise about Machinarium. This is nearly a perfect game, succeeding on almost every level, and the sheer amount of detail and polish applied at every stage of the presentation make it truly exceptional. Even the title screen is interactive. If you're wondering why I haven't mentioned the sound yet, it's not because it's undeserving, just overshadowed by the lush graphics and imaginative gameplay. In fact, the soundtrack is yet another highlight, with each area introducing new and fitting music. For the most part it's ambient, serene and calming, but there are some quirky up-beat numbers thrown in, like the joyous racket made by a group of robot buskers, or the chip tune-style pieces during the minigames (at one point you visit an arcade, and play a pretty shameless Space Invaders clone).

There are a few reasons why this game might not appeal to everyone, strictly as a matter of preference. The lack of dialogue, in particular, may be a turn-off for some, and the game does require a healthy chunk of "cartoon logic" during some of the later, more difficult puzzles. However, I suspect most players will find these small concessions, if that, and still well worth the affordable purchase price of the download. In fact, I’d go so far as to strongly recommend that anyone who’s feeling reluctant should step outside their comfort zone with this game, as its charms will almost certainly win you over despite your reservations.

If I was forced to pick one downside to the game, it's length. Whilst Machinarium isn't scandalously short, clocking in at six to eight hours depending on luck and hint use, it ends astonishingly abruptly. It doesn't feel like it's cut off, just shockingly sudden, and leaves without much resolution or even a lengthy final cutscene. It's a testament to any game's quality when one is left wanting more, but nonetheless, I'd have preferred a stronger climax to what was such a thoroughly impressive adventure to that point. That aside, this is the best time I've had with an adventure game – 2D or 3D, big or small budget – this year. With an original charm all its own, Machinarium is a real winner and an instant classic.

As imaginative as it is polished, Machinarium is refreshing, unique, and highly recommended. Just buy it. In fact, buy a copy for a friend.

GAME INFO Machinarium is an adventure game by Amanita Design released in 20092010 for Android, iPad, iPhone, Linux, Mac, PC, PlayStation 3, PlayStation 4, Vita and Wii. It has a Stylized art style, presented in 2D or 2.5D and is played in a Third-Person perspective.