Review for Ringworld: Revenge of the Patriarch

We get a small commission from any books sold.
Written by
Jeff Leung — July 29, 2005

Adaptations have been around for as long as entertainment itself. When inspiration runs dry, books inevitably become a rich hunting ground for filmmakers, playwrights, and more recently, game developers. In 1992, the award-winning Ringworld novels by sci-fi author Larry Niven became one such book series to receive the game treatment. Ringworld: Revenge of the Patriarch, the flagship title by then newly-formed Tsunami Games, manages to capture the spirit of the books, but unfortunately falls short as a game.

Ringworld takes place in Niven's "Known Space" universe. The novels follow the exploits of Louis Wu, a human sent by the Puppeteers to explore the ancient and mysterious Ringworld, an artificial ring-like construct that is home to billions of sentient life forms. The Puppeteers are a race of highly intelligent two-headed beings, and are so named because of their talents of manipulation. During this time, humans and Kzinti (a cat-like race of warriors) are locked in intergalactic conflict, which eventually ends in Kzinti defeat. The game takes place 20 years after Louis' journeys; a time of relative peace following the Man-Kzin wars. Using technologies discovered by Louis, the United Nations has built the Hyperdrive II, the fastest spaceship in the universe. However, the Kzinti have secretly constructed a second ship of their own, which also has the ability to destroy planets. When the Kzinti Patriarch discovers evidence of experiments conducted by the Puppeteers to alter the course of the wars in favor of the humans, he vows to take revenge by destroying the Puppeteer homeworlds. The game casts you as Quinn, a mercenary for hire and an old friend of Louis, who discovers the Patriarch's plans. Stealing the Hyperdrive II, Quinn travels to Ringworld in hopes of finding something there that can stop another intergalactic war.

Tsunami's approach to the Ringworld universe can best be described as "Ringworld Lite". The entire universe has been condensed into a five hour game, and as such, they don't quite manage to convey the vast richness that is Ringworld. There is also quite a bit of lore that is only mentioned in passing. To someone unfamiliar with the books, the task of trying to make sense of all the names, terms, and history might seem a bit daunting. However, the story is very strong, and the game makes sure that one only needs a surface understanding of the Known Space universe to be able to follow it. 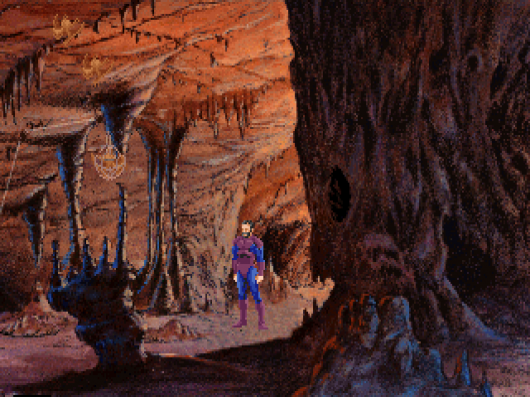 The decision to base the game around a new character rather than Louis Wu was a good choice, and provides a unique perspective to familiar settings. Quinn is the standard adventure game hero; a sci-fi George Stobbart if you will, noble and brave, though lacking in humor. He is aided on his mission by Seeker, a vengeful Kzinti who has been marked for death by the Patriarch for helping the Puppeteers during the war, and Miranda, a human engineer unwillingly brought along on the mission. They provide a good foil to Quinn's personality, and there is some nice dialogue between the three of them. A Puppeteer by the name of Hindmost, who threatens to turn in the trio if they do not help him find certain items on Ringworld, provides most of the humor. The Kzinti Patriarch is suitably menacing, though underused, as the game's central nemesis. Other characters don't fare so well, however. With few exceptions, there is a distinct lack of interesting characters on Ringworld.

The game boasts rich 256-color VGA graphics that are reminiscent of the LucasArts adventures of the day. One distinguishing feature is the use of a 180-degree view for the Hyperdrive II locations, creating a cross-sectional perspective of multiple areas that is reminiscent of RPGs such as Fallout. The musical score is made up of a handful of MIDI compositions, though none of the tunes are all that memorable. Oddly enough for a CD-ROM game, there is no voice acting. Although the close-up animated portraits for some of the conversations make up for this somewhat, the dialogue, and indeed the story itself, would have benefited greatly from voice actors.

Ringworld makes use of standard adventure game conventions, with the usual look, use, walk, and talk options. At the time, the interface was notable for its use of a pop-up selection menu; a forerunner to games such as Full Throttle and The Longest Journey. It works well and removes the need for an on-screen interface, though players may run into a few bugs. One that I encountered involved the cursor freezing as the hand icon after solving a particular puzzle, thus bringing the game to a grinding halt. Clicking the mouse button to bypass dialogue also tends to be quite erratic, leading to important lines of conversation being skipped. Another annoyance is that the hand icon, unlike the other icons, reverts back to the default cursor once it has been used. This results in having to go back to the pop-up menu time and time again to reselect it. 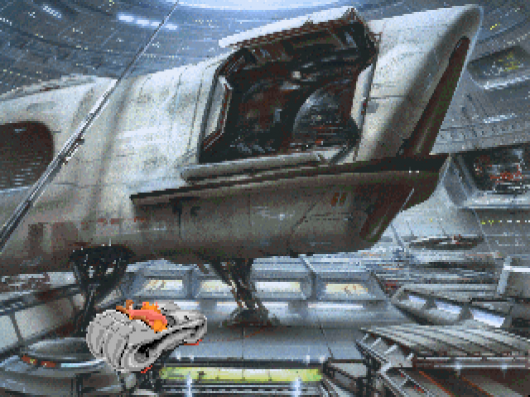 Despite its strengths in the story and graphics, Ringworld suffers from the "interactive book" syndrome. There are long stretches of cutscenes where gameplay should have been, and the player is merely left to watch passively. There were some strange moments where all action stopped abruptly on the screen, and it took me a few seconds to realize it was time to start playing again. Puzzles are few and far between, and tend to be simple inventory or logic puzzles. Dialogue options occasionally present themselves during conversations, but they have no significant effect on gameplay except as interesting variations of the dialogue. Another problem is that the bulk of the story basically involves traveling around Ringworld looking for items. Such a dry story device might have worked if the locales and their inhabitants were interesting, but they aren't. Ringworld never feels like a living, breathing world. Locations seem to exist only for the purpose of the player's quest for the items, and one does not feel the majesty and wonder that such a huge world should convey.

Ringworld ran well for me using DOSBox on WinXP, with no installation problems or crashes to speak of. There were the occasional graphical slow-downs, which can be minimized by tweaking DOSBox's "cycles" setting. The game also has a copy protection test, but it doesn't occur until quite far into the introduction, and could be mistaken as a game puzzle. Tsunami released Ringworld on both 3.5" diskettes and CD-ROM, and the differences between the two are minimal, if there are any at all. Early copies of the game also came bundled with the first Ringworld novel. The CD version that I played didn't have the novel, but did include the hintbook at the end of the manual. In addition to providing a walkthrough, the hintbook also has an interesting section on the history of Ringworld.

Overall, Ringworld: Revenge of the Patriarch can only be half-heartedly called a game. The story is well told, but there is no real effort made to craft an immersive playable experience. Players looking for a satisfying adventure game will be disappointed. However, those with a taste for sci-fi political intrigue set in Niven's much-loved universe may be able to overlook the game's shortcomings. The sequel, Return to Ringworld, is more worthy of the Ringworld name, with significant improvements in gameplay and storytelling. As it picks up right where Ringworld leaves off, it might be worthwhile to give this one a try to get acquainted with the story. Otherwise, this game does little to distinguish itself as an engaging standalone title.

Ringworld does a satisfactory job of bringing Larry Niven's universe to life, but fails to distinguish itself as a game.

GAME INFO Ringworld: Revenge of the Patriarch is an adventure game by Tsunami Media released in 1992 for . It has a style and is played in a perspective.