We get a small commission from any books sold.
All Bitmap Books
Written by
Claire Wood — July 26, 2005

Final Destination: The Secret of Larson's Folly is an independently developed game, largely produced by the efforts of one man, Jonathan Cooper. The game fuses a futuristic sci-fi storyline with taxing puzzles, while at the same time attempting to establish a thought-provoking dialogue on questions of faith and life after death.

The game opens with a typically bleak vision of the future. In 2818, a Civil War wiped out most of civilisation, leaving only small pockets of survivors dispersed across the galaxy. On the planet of Larson's Folly, one such group managed to discover the secret of unlimited energy. Three hundred years later, your people are attempting to rebuild, and send you to find the scientists that developed this energy source. On reaching your destination, however, you find the planet blown into fragments. As you explore an abandoned space station, you are called upon to answer the question of what happened to the inhabitants of Larson's Folly—were they all killed, or did they find some way to escape their fate?

Final Destination is a first-person, slide show, point & click adventure, in the tradition of the Myst games. It uses a simple interface, with a smart-pointer that becomes a magnifying glass over interactive hotspots. Examining these hotspots opens a second panel, which overlays the main screen. When exploring the static environments, you'll find neither inventory to amass, nor other characters to interact with. The plot is only divulged by examining the scattered journal entries and reports left behind by the former occupants. By reading these, you'll discover that the inhabitants of Larson's Folly knew that a stellar shockwave would destroy their planet in one year's time, and their journals chart the reactions of several individuals to this fate, their strategies for survival, and their belief in what, if anything, would happen afterwards. Final Destination therefore plots the psychology of a doomed people, and the lengths that they will go to in order to survive. No doubt resulting from his experience as co-author of the Starman Series, Cooper's game is well-plotted, with several clever twists towards the end. 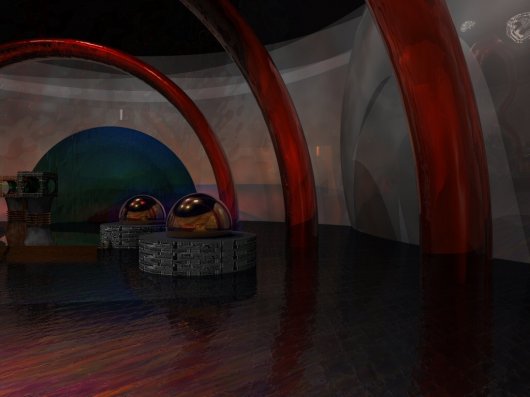 The story turns upon the conflict between Flora Sumner and Arnold Brandon—the former a committed Christian, and the latter an equally resolved atheist. Creating empathy for these characters relies entirely upon reading their journal entries, but at times I felt the writing of these accounts was clumsy and a little too blatant, risking transforming both characters into mere mouthpieces for their competing belief systems. Some of Flora's reflections read like religious tracts, while Brandon's intolerant condemnation of her beliefs saw him swerving into the domain of the pantomime villain. This made it difficult to identify with either character, and summon up enough interest in their respective fates to merit slogging through the puzzles.

For most of the time, the plot retreats into the background, being overshadowed by a series of demanding challenges. Although there are only seven puzzles in Final Destination, their difficulty translates into 20-plus hours of gameplay, most of which is spent stuck and sighing in frustration. Each challenge involves tinkering with the base's dilapidated computer system, and requires a logical, systematic, and technically-minded approach. Whether powering up a lift, tampering with the heat and lighting controls, or re-routing the power supply, the core puzzle design is more or less identical--players need to examine a control panel, input a sequence or adjust some variables, and press the 'engage' button. The computer will then attempt to run a boot-up sequence. If the variables are correct, you'll be rewarded with a short cutscene, and allowed to progress further into the base and uncover more of the story. If one of the variables is incorrect, (which in my case it almost invariably was), then the boot-up sequence will return a failure message, accompanied by an irritating bleeping sound. Although these sequences are normally less than ten seconds in length, it will take most people several attempts to get the correct solution, and if you're not technically-minded, perhaps many, many more. As you can imagine, this results in a lot of tedious thumb-twiddling, as you wait to be informed, yet again, that you have failed.

The game is highly linear, and so the player is left with no choice but to knuckle down and complete the challenge in front of them. While many games are designed this way, it has never been as glaringly obvious to me as in the case of Final Destination. With no distractions in the form of enticing environments, alternate minor puzzles, or perhaps the occasional light-hearted moment, the game never pretends that you were placed on Larson's Folly to do anything except solve difficult engineering puzzles. Added to this is the game's odd sense of pacing, which makes every step forward seem like slamming into a brick wall. This is especially evident in the late stages, where solving a puzzle only allows you to explore a single new room before being confronted by the next puzzle. When combined with the desperate lack of variety in puzzle design, gameplay becomes sluggish and monotonous. 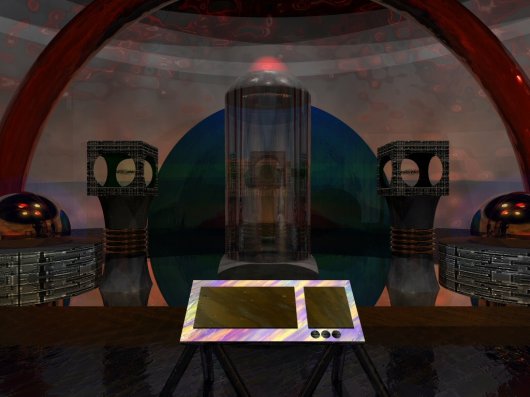 Fortunately, Cooper is sensitive to the fact that some of us can't even program a video recorder, let alone operate the computer systems of an advanced civilisation. To this end, it is possible to choose from three difficulty levels at the start of the game. Although this doesn't change the nature of the puzzles, it does determine how much of the computer data has been corrupted, and therefore how many hints you are given. I was unable to complete the game at the hardest level, and at times even struggled on the easiest. Many of the reports in Final Destination use technical language and descriptions that are difficult to understand for anyone but engineers. Even after assimilating this information, there remains a degree of trial and error to puzzle solving, which is liable to frustrate even the most patient of gamers. Above all, the single-minded technological focus of one puzzle after another failed to capture my imagination, or even engage my attention when I wasn't physically sat in front of the game, frowning at my monitor.

As an indie game, Final Destination is unable to compete with its bigger budget competitors in terms of graphics, although it is obvious that time and effort has been spent on them. This is particularly clear when each of the rooms is re-lit using a different colour palette after the emergency lighting is switched on. That said, there is a huge variety in the quality of these three dimensional environments, from the weak, grainy crater landscapes and stark cafeteria to the more impressive power plant interiors and transport room. The backgrounds are static and extremely sparse, with the only interactive hotspots being the wall panels and computer terminals. While for once this means that I have no gripes about pixel-hunting, the degree of minimalism makes the backgrounds bland and visually uninteresting.

The animated cutscenes are shaky at best, and either depict the results of your mechanical tinkering, or provide a quick plot recap (just in case you'd been skimming the prescribed reading!) The latter rarely reveals new information, instead generally consisting of the camera panning across a location which you have already visited, with overlaid text which you've normally already read once. The overall quality barely surpasses something designed and produced in Microsoft PowerPoint, and seemed a poor reward for the irreclaimable hours of puzzling I'd endured to bring about their appearance. 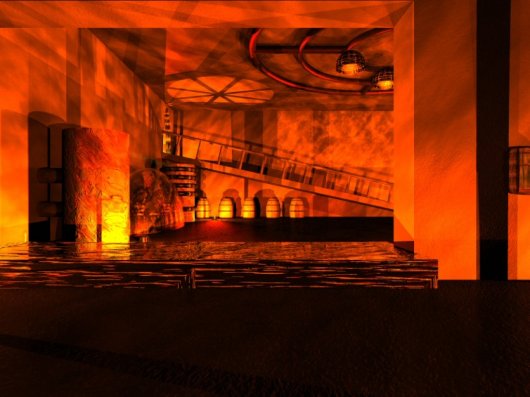 It really is a shame about the alienating puzzles and journal entries, because in other areas Final Destination genuinely tries to be appealing and user-friendly. The well-written, step-by-step, in-game walkthrough is a helpful addition, while a 'zip to' menu allows you to skip to any previously visited location. The soundtrack, produced by Ben Cooper, is another high point, with ambient looped themes which worked well with the general mood of the game. In addition, the CD also contains an entire book from the Starman Series for you to peruse.

Final Destination has a number of positive elements, which are a credit to Jonathan Cooper and his small team. However, the difficult and relentless technical puzzles, combined with substandard production values make this a game that few will enjoy, even at the current bargain price of $10. Even fans of hard sci-fi and technical puzzles will need to be in a forgiving mood to overlook Final Destination's many flaws. You can purchase this game at the developer's website, but before you do so, I strongly recommend you try the playable demo. If you enjoy this taster, then you'll love the full version, which is more of the same (and then still more and more of the same). The rest of us are likely to find doing our tax returns more entertaining (and perhaps a little less difficult!)

Most will find Final Destination an unengaging and frustrating experience, with flaws that even technically-minded fans of sci-fi will be hard pushed to overlook. Trying before you buy is strongly recommended.

GAME INFO Final Destination: The Secret of Larson’s Folly is an adventure game by Cyragon released in 2005 for PC. It has a style and is played in a First-Person perspective.

What our readers think of Final Destination: The Secret of Larson’s Folly