In the past few years we’ve seen hope for a resurgence of adventures as the genre branches out from the PC. New consoles like the Nintendo DS and Wii employ innovative control options that bring games that used to require mouse support back to the mainstream, while the success of episodic gaming from companies like Telltale has lessened some of the risk associated with introducing niche genres to the marketplace. Is Agharta Studio’s 1112: Episode 01 for the Apple iPhone (or iPod Touch) the perfect storm of these two trends? Well, it certainly shows signs of promise, but don’t toss out that PC just yet …

As Louis Everett, an antiques dealer in New Jersey and the spitting image of Johnny Depp circa The Ninth Gate, you wake up with a tremendous headache after yet another dream of falling from a great height. You’ve been having these kinds of headaches a lot lately, and now you’re two hours late for a meeting with an important client. If you’re not intrigued yet, you may never get there in this installment, as the story of 1112 fails to progress very far from this point. The introductory episode doesn’t introduce nearly enough of a plot to give one any impression of where the series is going, what the number 1112 means, or even why the game considers itself a “mystery.” While some ominous hints are dropped—about the government having banned tobacco, alcohol and religion, for instance—the episode ends right before it seems like something interesting is about to happen.

Though the story is yawn-inducing, the way the iPhone technology is used with the interface is rather intriguing. From a first-person perspective, you travel from screen to screen, using your finger to tap on different objects, which brings up two or three interactive choices that vary from item to item (e.g. “Take” or “Push”). If you want to zoom in or out, you spread or pinch your fingers against the touch screen. A side menu allows you to access your inventory, your map (from which you can travel to any room you’ve already visited), and a list of characters you’ve met. Inventory items can be rotated and observed from different angles with a mere flick of the finger. Dialogue is handled by touching a list of conversation choices, and highlighted words in the person’s response can also be tapped to add more topics to your list. An in-game keyboard is available for custom topics, but I could only find one (well-telegraphed) instance where you get more of a response from it than “What are you talking about?” Ultimately, there isn’t much you can do with the touch screen that you couldn’t do with a mouse instead, but the fact that it works as well as it does is a triumph, clearly proving that the iPhone/iPod can do more than play puzzle games or Texas Hold ‘Em. 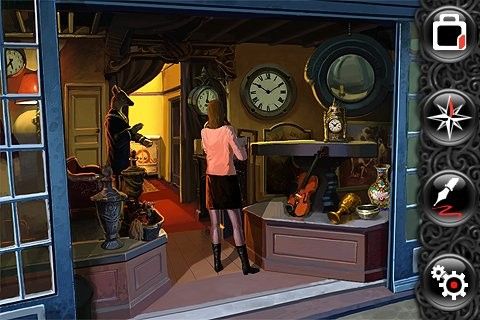 In fact, the interface works so well that it’s heavily overused, as the amount of information about random stuff is sometimes overwhelming. While so many adventure games these days give us large screens with only one or two points of interaction, each screen in 1112 features nearly limitless touchable objects. These interactions are frequently bizarre, but rarely crucial. While “Examine” is always a choice, the other options are things like Pillow: Choke, Couch: Upholster, or Anna: Lie Down (in order to look up her skirt, Louis says). I would say close to 99% of these options involve Louis explaining why he can’t do what you’re asking, with only about 1% actually being necessary for advancing the game. It’s almost as if the designer scripted a text adventure, trying to invent a response for whatever crazy thing you could type, but ended up going the graphic adventure route somewhere along the way. Unless you love hearing Louis’ strained attempts to “joke” about his wife’s domineering attitude, poor taste in furniture, or his own terrible hygiene—and I’ll confess I did not—after a little while you’ll ignore the majority of junk on each screen and focus on the next task set in front of you.

Generally these tasks are very straightforward. The first puzzle is trying to remember the combination to the safe where you put your headache medicine, or specifically where you may have written it down. Louis won’t even go into the kitchen until you’ve done this, and later puzzles share these same building blocks. They’re typically mundane tasks like “find your wallet,” which you’re explicitly told you must do before you can take one more step, and which you are incapable of doing before someone suggests it (“Nah, I don’t need my wallet weighing me down”). When you find your iClone (they couldn’t use the actual name of the product the game is played on?), your excitement may build as you consider all you could do with it, but besides using it for a couple phone calls and a few pictures, you’ll only utilize a fraction of its potential.

The hand-drawn graphics, on the other hand, are an area where 1112 excels. I can’t really imagine more detailed or better-realized locations than the developers managed to cram into the iPhone’s 3.5-inch screen. Despite the rooms being packed from floor to ceiling with clutter, I never had any difficulty identifying what objects were, even if I didn’t zoom in. The character models are a little on the odd-looking side, but that’s more of an art direction choice than a technical limitation. The soundtrack contains one major—and rather catchy—song that plays over the first few scenes, while some later instrumental pieces do a fine job providing atmosphere. When you select an object, it occasionally makes a sound, such as rustling the curtains, but since Louis refuses to move or even touch the curtains, it’s more like noise pollution than representative effect. There’s no voice acting, except for some annoying outbursts the characters make when you want to talk to them (like “Hey!” or “Oh!”). You’re better off using the Options Menu to turn the music all the way up and the other sounds all the way down. 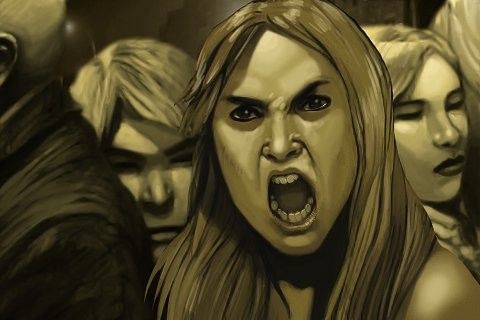 If you stay on course and follow each objective as it’s given to you, you’ll find around two hours of gameplay here, though you could easily double that if you stop to read every line of script for every single object. You may have heard complaints about the poor English translation when the game was first released, but the updated version now on sale has scrubbed most of these issues and left only a few minor typos and grammar snags to contend with (though the characters still sound more “English as a second language” than they do natives of New Jersey).

Despite the issues I had with 1112, I’m certainly willing to believe that the series as a whole contains promise. The interface may not redefine how we think about games, but it impresses by being different from traditional PC adventures yet completely functional, and the graphics and music are top-notch. The biggest problem I have is that it betrays the implied covenant of episodic gaming. A good episodic game is like a good episode of a serialized TV show, with its own beginning, middle, and end, sprinkled with plenty of hints towards the larger overall story arc. 1112: Episode 01 barely even contains a beginning, and is more like the prologue to a novel. It provides some strange clues that this world is not the world you know, but gives you nothing to really sink your teeth into. There’s a reason books aren’t sold by the chapter.

The first episode costs $7.99, and you can either purchase it from iTunes at the 1112 website or through the iPhone’s built-in App Store. According to the developer, the next episode is already well underway and will only cost $4.99, and while the price drop is certainly welcome, it strikes me as the wrong way around given the limited scope of this initial installment. While it’s way too early to call this project a failure, you may want to wait for future episodes to be released before you decide whether or not to invest in it. It’s possible that 1112, when viewed as a whole or at least with a few more substantial episodes, will tell a fascinating and engrossing tale, but the story in this individual episode—the subject of this particular review—is nonexistent. It expects to survive on novelty and presentation alone, assuming you’ll buy the next chapter if it can ask you enough bewildering questions, but you’ll need more reason than that to go back for seconds.

If nothing else, 1112: Episode 01 proves that the iPhone/iPod Touch provide a viable platform for adventure games, but until the series raises the level of puzzles and narrative to even an acceptable minimum, it’s not quite time to put away the mouse and keyboard.

GAME INFO 1112: Episode 01 is an adventure game by Agharta Studio released in 2008 for iPad and iPhone/iPod Touch. It has a Stylized art style and is played in a First-Person perspective.