We get a small commission from any books sold.
All Bitmap Books
Written by
Heidi Fournier — October 31, 2004

Ok, ok, you all know I love Myst; if you are not sure how much, check out my reviews on this site. But I must say, I saw warning lights flashing all over Myst IV Revelation. First off, Ubisoft would only be releasing it on DVD! Were they gambling that the game was so good people would pay to have a DVD drive installed just to play it? That’s ego! Or was it because the game wasn’t quite up to snuff and therefore only die-hard fans would purchase it, increasing its chances of getting better word of mouth? On top of this, Ubisoft also announced they would bundle the game with Myst 3: Exile! Did this mean the game was going to be short? I chewed my nails pondering these questions while I - you guessed it - waited for my new DVD drive to be installed (man, what won’t I do to play Myst?).

Though I was not thrilled that the game only came on DVD, I must confess I did not experience any of the install problems I have been hearing about on the web. Once I had a DVD drive, the game installed without a hitch. And this one-format-fits-all philosophy doesn’t seem to be hurting game sales either, at least according to weekly sales charts. After playing the game I can tell you it's because Myst IV Revelation is just what its name implies – a revelation.

I quickly realized that all my concerns were unfounded. The game isn’t incredibly short; quite the contrary. It isn’t slack on details--which is an area this series is known to deliver on. It doesn't cop out and only provide weak-kneed puzzles. In fact, it even delivers in the tricky arena of character interaction and voice work. 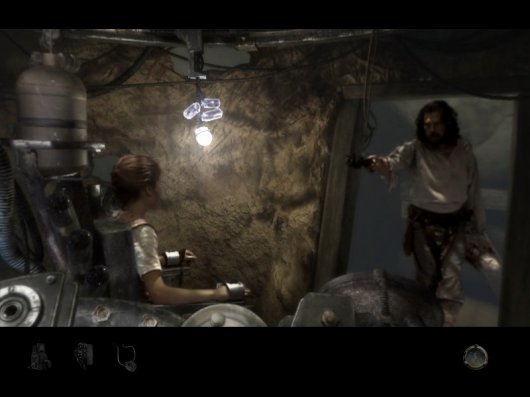 From the first second I entered the game world, I was completely enchanted by the game’s graphics, which are extraordinarily realistic. Myst 4 graphics come complete with a number of little flourishes that please the eye. Everywhere around you there are endless little animations that give the game the kind of extra touch that you just don’t get in most adventure games today: a flock of whirling birds, grasses blowing gently in the wind, multitudes of bugs, butterflies, and even bubbles floating here, there and everywhere. This extra attention to detail is what all the Myst games have been known for and it is one of the reasons these games are still considered a benchmark by which others are judged.

As a Myst game, the player can also expect certain things and this is certainly true in Revelation. Once again Atrus needs your help to solve a problem. This time it seems that Catherine, Atrus’s wife, has been nursing some guilt over the imprisonment of their two sons in the prison books Atrus created in the original game. She feels that they have had ample time to mull over their evil ways, realize the magnitude of their sins, and should therefore be ready to atone for what they did. Atrus, however, is not as sure of this as Catherine, and thus calls you in to help. As an outsider you can, hopefully, bring the objective perspective that he needs to figure out if the boys have actually repented. This means visiting their prison worlds as well as an entirely new age called Serenia.

One of the first things that struck me about Myst 4 is how much it felt like Riven, in my opinion the best game in the series. Riven afforded players 50 to 60 hours of immersive, exploratory game play, peppered with every type of puzzle to delight and frustrate. It also provided some of the best computer graphics available then or now. Compared to many of today’s games, Riven appears to have hardly dated, in some cases it is even superior to games seven years its junior. That is not the case with Myst 4; it’s all back, and I mean everything from the stellar graphics to the headache-inducing puzzles. Myst 4 is a good fifteen hours longer than the last installment in the series, and also includes some of the most difficult puzzles I have ever come across. 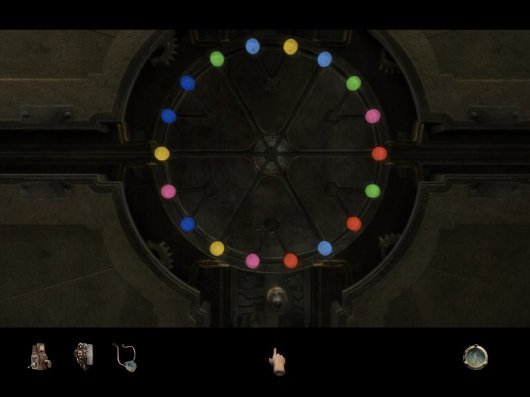 There are two puzzles in particular that will require all the ingenuity you possess. One I will call the Pit Puzzle and the other the Slider Puzzle which are both very difficult, and take an extraordinary amount of time to solve; largely, because the game provides way too short of a window to complete required actions. Couple this with a point & click interface that up to this point works well, but during these puzzles, becomes fussy and clunky. In the Slider puzzle, I found that if the pointer was not placed absolutely correct it would often transform into a magnifying glass signaling a hot spot. This caused me to zoom in on an object when what I wanted to do was push the slider. Grrrr! In the Pit Puzzle, success is dependent on cranking out a series of sounds correctly. Here the game gets extremely finicky; sometimes accepting the sound you have created, sometimes feeling it isn’t quite close enough, thus causing you to waste precious moments repeating the sound sequence. These peculiarities cause an extreme amount of frustration. However, should you need a nudge in the right direction you can always get a few hints from the game’s built-in help system. This system provides the player with three levels of hints, from the most basic tips to the complete solution; each with a clear warning that by indulging you may impair your enjoyment of the game.

The game controls are, besides the aforementioned complaint, easy to use and understand during the vast majority of game play. Myst 4 uses the same point & click system we all know and (hopefully!) love. But Ubisoft has refined the system by adding a number of options and tweaks that create a more personalized system. The pointer, shaped like a hand, can be set to be left or right-handed, a move sure to please all those lefties out there. You can also change the brightness of the hand, from barely noticeable to 100% opaque. But one of the smaller things I really liked about the interface was that you actually needed to grab and push or pull levers, doors, and journal pages; just clicking on them won’t work, which I felt added a nice level of depth to game play.

And this wouldn’t be a Myst game if there wasn’t plenty of journal reading to do. I counted five journals to sort through. Every character in Myst seems to be a prodigious writer, and every journal comes loaded with hints and clues the player will need to succeed at various puzzles. One of the nice things about Myst 4 is that it includes an in-game camera, something the other games didn’t. Instead of making detailed notes, as in days past, you can just take pictures of anything you think you might need such as languages, symbols or machine configurations. This is tremendously handy and I found myself quite taken away with this new tool, rapidly clicking away at anything I thought might come in useful later. 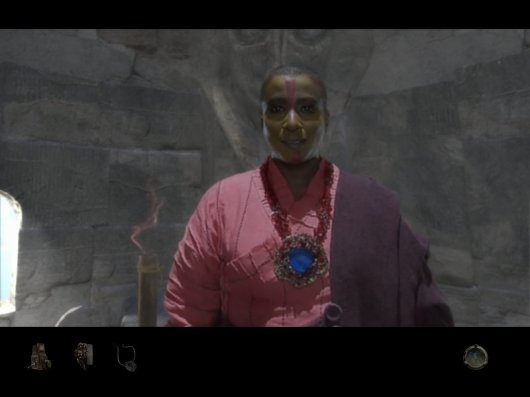 The acting is also above par. In Exile, the first game to actually include any real amount of character interaction, I found the Saavedro character to be too overwrought and a tad too far over the annoying line. The characters in Myst 4 are given a good deal more screen time than in previous games. This is especially true with the character Yeesha, Atrus and Catherine’s daughter. Yeesha is a new character we have not previously met in the series, and she is the lynchpin that holds much of the plot together. Therefore, the character needs to charm the gamer or they won’t care a whit about what happens to her. The young actress Ubisoft found to fill this role does a remarkably good job at grabbing and holding the gamer’s attention. For such a young actress, who most likely had to act against nothing but a blue screen, she never looks uncomfortable or unsure, which provides Yeesha with the quiet confidence that powers the game’s story.

The music is incredibly polished. Which isn’t surprising when you consider that it was composed by Jack Wall, who did a brilliant job with Exile’s soundtrack with help from Peter Gabriel. Myst and its sequels have always gotten this part of the design process right and this game is no exception. It even offers you a music frequency option! The higher the frequency the more music you hear, the lower the frequency less – do I love this feature or what! What a great idea. Not that there was any need to be hesitant, this game has a high quality soundtrack which offers a diverse number of tunes for different environments and a full range of ambient sounds. The music always seems to have a haunting quality, as well as a sense of urgency that spurs the player on and is a fitting match for game play. And everything seems to have it own realistic sound built in, just try tapping something with your pointer. 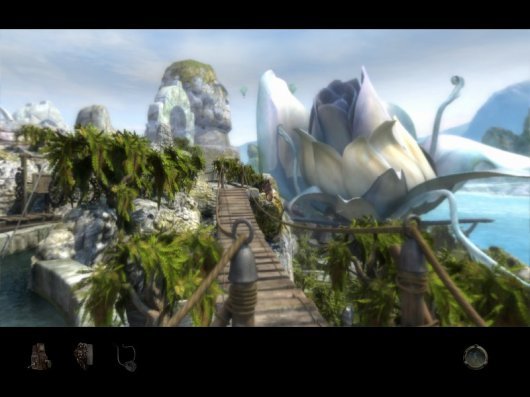 I felt this game was very reminiscent of Riven, but like all the Myst games its puzzles are smoothly woven into the game’s environment. Don’t be surprised if you need to pick up three or four different clues at different parts of each age to solve puzzles. This was something that all the games have done well and is a leading reason these games are so well liked – they are a challenge, but a solvable challenge.

There are so many good things going on in this game, I feel confident that every type of gamer will find something to like. Though there were a few puzzles that caused some frustration, all other facets of the game are so well developed and presented that I have confidence these small inconveniences will soon be forgotten. Revelation is a worthy and enjoyable sequel, and if they keep making them this good, this series might just go on for another ten years. Here's hoping!

A fateful return of a venerable series proves it still has legs even 10 odd years on.

GAME INFO Myst IV: Revelation is an adventure game by Ubisoft released in 2004 for Mac and PC. It has a Illustrated realism style, presented in Panoramic nodes and is played in a First-Person perspective. You can download Myst IV: Revelation from: We get a small commission from any game you buy through these links.
The Good:
The Bad:
The Good:
The Bad:

What our readers think of Myst IV Revelation

4.5 stars out of 5
Average based on 12 ratings
Your rating

Even after 14 years this game still looks great and is definitely one of the best adventure game I have ever played. In the meantime I have played quite a lot ...... really a lot!.... Read the review »