Seemingly abandoned on a beach in an unknown location, a large dilapidated boat has been completely overtaken by thick plant life. It’s owned by a company called EDEHN, for Ethology Department of Extra-Human Neuroscience, and how it got to be in this state is the first mystery you’ll ponder as you begin The Experiment. The second one is: Who am I? You log in to the ship’s security network, a camera feed opens, and there on a cot, a woman is waking from what appears to be a long sleep. Her name is Lea Nichols, and she can’t remember how long she’s been there, or what happened to her and all her coworkers. She’ll need your help to find out.

Originally published in Europe with the vastly more interesting name Experience112, developer Lexis Numérique has created a refreshing and rather innovative approach to the genre. The typical adventure game is played in one of two ways: either you observe and directly manipulate an in-game representative from a distance, or you become the in-game representative looking out at the game world around you. The Experiment incorporates a little of both perspectives and yet fully embraces neither. Not only are you unable to directly control the game's visible character, but the idea of the playable character existing immediately inside a fantasy world is also removed. This is the first game that—sci-fi elements and less-than-photorealistic graphics notwithstanding—could actually be happening to you. Imagine yourself having somehow hacked into EDEHN’s intranet from the comfort and safety of your living room, and that everything to follow is real, and you’ll have some idea of the immersion effect the developers have managed to achieve.

When she first wakes up, Lea is confused and disoriented, but she quickly realizes there’s an intelligence behind the moving security camera in her room. You have no way of telling her who you are, even if you knew, so the best you can do is nod the camera up and down when she asks for your help. She’s also weak and prone to fainting spells, and desperate for a mysterious drug that’s at the center of whatever EDEHN was working on. Using your position from the computer control panel, you’ll be able to indirectly guide her through the ship to meet her objectives, and even scout the paths up ahead. You can have up to three security camera windows open at once, though switching back and forth to keep track of what’s going on will take a little while to get used to. The first time you have all the camera windows trained on Lea, watching her do the exact same thing from three different angles, is quite a thrill, and it’s then you realize what an accomplishment this interface truly is (not to mention why it’s such a system hog). 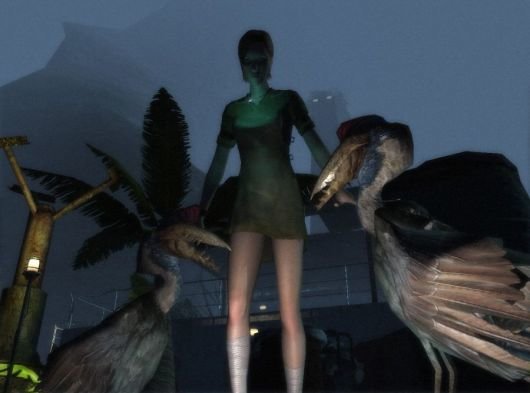 The left side of your desktop functions like the Windows Start Bar, and is where you’ll access the map of the ship, the cameras, the personnel files, a list of objectives Lea gives you, as well as the standard save and load functions (in this case, termed as “backup files”). Lea will ask you to help her do something, like find a keycard or locate a room in the ship, and using the map you can turn on lights or computer panels to draw her attention to where you think she should go, as well as open doors. Maybe you see the keycard on a desk near a phone, but she doesn’t, so you click an icon on the map to make the phone ring so she’ll look over there. In another (occasionally frustrating) bit of realism, she won’t always notice what you want her to see the first time, and might complain that you’re causing a phone to ring for no reason. Try again though, and she’ll finally say, “Oh, here’s the keycard,” and place it in her invisible pockets.

Thankfully, turning on lights and making phones ring is not the limit of your interaction with Lea’s world, or the novelty would wear off very quickly. Lea’s also incapable of operating virtually any piece of machinery. Early in the game, she’ll need you to steer a helper robot into a gas-filled room to retrieve—why not?—another keycard. This is only one of many pieces of equipment you’ll remotely commandeer, including cranes, little robotic arms, security robots, and even a searchlight. With a limited number of fixed cameras, each with a particular viewing area, running all these gadgets can be extremely frustrating, but in most instances it can be forgiven in view of how legitimately hard it would be to steer a robot under these circumstances. Considering it’s not possible for Lea (or yourself, for that matter) to die in The Experiment, even an apparently irreversible failure only results in having to start whatever you’re doing over again, so when you’re faced with difficult controls you can always fall back on trial and error.

You can minimize your uncertainty if you’ve done your homework, and there is plenty of homework to do. The EDEHN vessel had at least 21 crew members—though of course they all seem to be missing or dead now—from a French chef with a secret to a drug-dealing doctor, and each one has their own personnel file that’s bursting with useful information. You’ll need to find their login ID, their login password, and their sensitive files password to get to it all, and that’s the source of some of the game's most rewarding puzzles. While some passwords can be spied scrawled on a piece of paper using the camera’s zoom lens, and others can be found in e-mails, some can only be guessed at by paying attention to what others say about a character’s personality. Once you’re in, the personnel files are a treasure trove of info, with access codes, schematics, and step-by-step instructions by the barrelful. The files aren’t only practical, they’re also filled with well-written entries that slowly reveal how things fell apart, what sort of experiments were being conducted, and the interpersonal relationships of several characters. 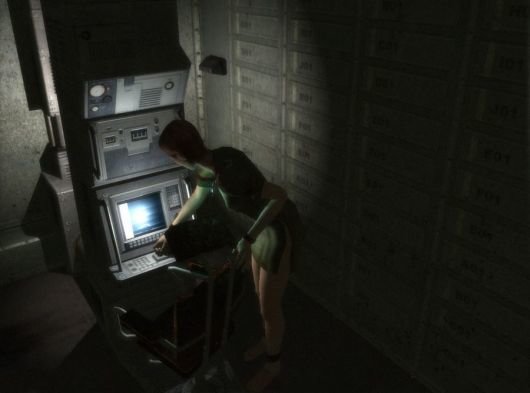 It’s a shame these characters couldn’t get voice actors even half as interesting. Lea sounds like nothing so much as a too-chipper corporate phone system (as in “Please listen carefully, as our options have changed”), and will start to annoy from moment one. The few other voices are similarly grating or—at best—boring, with not a single stand-out among them. For someone who can’t find her way around a ship she lived on for years, Lea has an annoying habit of treating you like an idiot. She’ll mention a puzzle that needs solving, and as you’re gleefully thinking, “I remember reading about that in so-and-so’s file,” she’ll almost immediately interrupt your search with, “Maybe you should look in so-and-so’s file.” Then about ten seconds later you get, “Haven’t you figured it out yet?” While the background music isn’t nearly as intrusive, and it conveys a definite sense of eeriness, sometimes it can be way too upbeat. One song sounded so much like “Low Rider” it disturbed me more than any plot twist that came along.

If the music drops the eeriness ball sometimes, the graphics may pick it up again. Everywhere you look onboard the ship are scattered papers, dead bodies, deep shadows, monstrous plants, and creepy pools of liquid, all carefully rendered and detailed. Unfortunately the character models aren’t of the same quality, and seem polygonal and old-fashioned. What’s worse, Lea herself experiences a lot of object clipping. Sometimes you can see her arm pass through a door, or an item she’s holding will drift in and out of her body. The clipping starts in the opening sequence, and is the first chink you’ll see in The Experiment’s shiny armor. The interface may be extremely impressive, but you’ll get the feeling that’s where all the developer’s energy went, as almost every other aspect of the game feels unpolished, at times shockingly so. At one point, a cryptography puzzle must be solved to obtain someone’s password, but regrettably the solution you’ll get doesn’t actually unlock anything, since it’s misspelled and missing the last two letters.

If only that was the most frustrating glitch. Late in the game there are several time-sensitive sequences where some chemicals must be mixed together and then launched. Sometimes the launch button just doesn’t work, and worse, it resets the chemicals you entered so you have to start over. When this leads to you failing the ten-minute long sequence and being sent back to start for the third time, you might begin to feel like The Experiment is actually on you, and they’re testing the upper limits of your patience. Although if you’ve actually made it to the sequence I’m describing, your patience might very well be infinite. Unless your PC is well above the minimum system requirements, you can expect some sluggish framerates and long load times, slowing down an already slow game. If you’re being extremely generous, you could describe Lea’s pace as “moseying,” though when you have to walk her from the cargo bay back to the upper deck yet again, you’ll probably call it something you wouldn’t repeat in polite company. 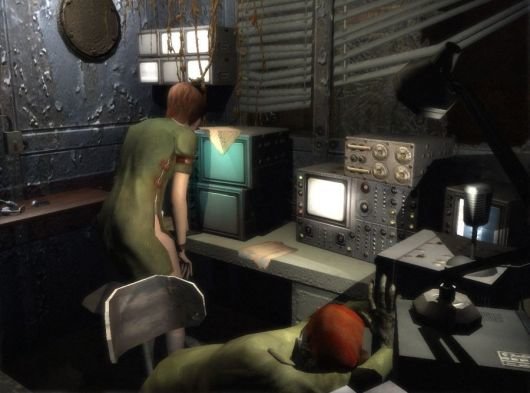 Certainly if she put a little pep in her step, the 15 to 20 hours it will take to finish the game would be greatly reduced. Though it’s not until the conclusion of all those hard fought hours that you experience the game’s most unforgivable sin: the ending. One moment Lea is about to step forward to finally find what she’s been looking for this entire time, and the next she’s back again, having seen it and decided it wasn’t that important, and then the game is over. Yes, the climax of the story takes place entirely off-camera. This wasn’t helped by a glitch that caused the ending cinematic to play without sound the first time, enveloping the non-ending with an additional shroud of obscurity.

Still, these last several points don’t mean The Experiment is wholly without merit. The developers have forged a new, more realistic way of interacting with the in-game universe, one which both technically dazzles and emotionally captivates—at least, at first. By restricting your options to only those things you could feasibly operate from behind a computer, the game nurtures a feeling that somehow the player is bridging the gap between reality and video game fantasy. However, while the first few hours of play are so impressive you’ll feel like you’re witnessing the birth of an adventure game revolution, it ends with more of a whimper than a bang. By the time you’re more than halfway through, the number of flaws and glitches you encounter may cause you to forget why you were so excited to begin with. There’s a truly solid foundation here, but a few too many things went wrong in the execution to call it a success. Although it remains a formula with tremendous potential, this is one experiment that needs to go back to the drawing board.

A terrific way to spend 6 hours but a mediocre way to spend 15. The interface is a strong first step towards a new way of playing adventure games, but only the most patient of gamers will be inclined to endure the game’s other flaws and see it through to the end.

GAME INFO The Experiment is an adventure game by Lexis Numérique released in 20081996 for PC. It has a Illustrated realism style and is played in a First-Person, Third-Person perspective.

What our readers think of The Experiment