Review for The Dark Eye

Bad Day on the Midway (The Residents)

We get a small commission from any books sold.
All Bitmap Books
Written by
Dan Ravipinto — December 4, 2003

The Dark Eye is an adventure game based on three works by Edgar Allen Poe. All are contained within a framing story which, while original, manages to capture much of the flavor of Poe. Each narrative is told twice, with the player experiencing the same tale through a different character's eyes--once as murderer and once as victim. To reveal the specific three works the game is based on would spoil the surprise.

Visually, the work is a wonder. The very first menus, based on a "phrenological reading" of the player, evoke a feeling of mystery and unease. The game begins with a half-seen face reflected in a pool, while a narrator asks his audience to please be patient with him: the narrative he is about to tell may seem unbelievable, but is surely true.

A ripple across the water reveals a massive house, and a twist of perspective leads to the player standing before its doors, a knocker waiting to be used. The door opens to reveal the house's first inhabitant, and the carefully crafted atmosphere reveals yet another layer: all of the characters you interact with are neither 3-D polygons nor hand-drawn 2-D images. 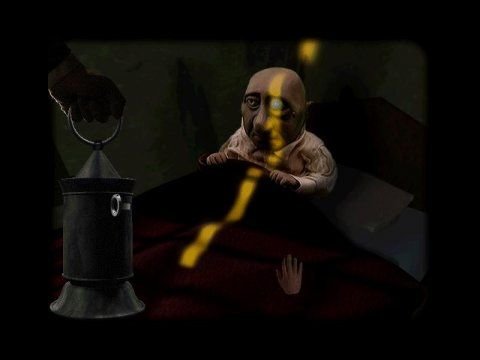 They're strange creatures--faces like Greek masks, eyes nothing more than thumb prints in clay. Their clothing is meticulously real, however, each costume perfectly suited to both time period and personality. They're brought to life using stop-motion animation, and every movement they make is incredibly evocative.

No attempt is made at true realism, however; the characters are not lip-synched to their speech. In fact, their mouths don't move at all. The final effect is both incredibly stylized and disturbingly real. 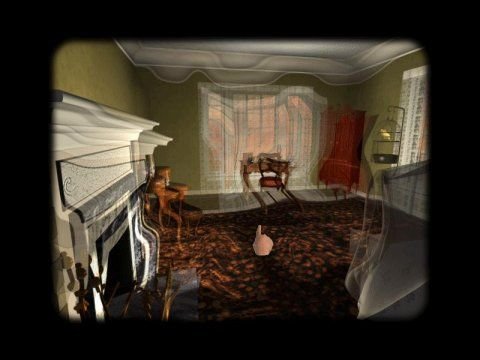 The story proceeds as you meet the house's inhabitants: your uncle, his servant, and his ward. Your brother is also here, after a long time abroad. Suddenly, you feel faint. The screen wavers, turns black. When it lightens again, you find yourself in a nightmare version of the building, done in shades of black and blue. Strange voices whisper from the walls.

It is from this dark version of the world that the three Poe stories are told. Different objects in the house set off the stories, which can be played in any order. The game proceeds in this way--a portion told in the "real world" and one in the world of Poe's tales. Once all have been told, the framing story concludes, its ending connecting wonderfully to the smaller ones.

The interface at first appears to be that of a typical post-Myst first-person adventure. The screen shows what your character sees and the mouse controls a cursor (a hand) which can be used to manipulate objects in the environment. What is different here, though, is how the interface interacts with the player. The hand is very much alive -- it speaks its own language in its movement. Place the cursor at the edge of the screen and it points in the direction you'll walk in. Click on a torch and it will grasp and place it in hand. At different points in the game the hand will run its fingers gently over an object in remembrance or claw frantically at a barrier seeking escape. It's a wonderful use of the interface and truly drew me into the stories -- the hand became an extension of myself. 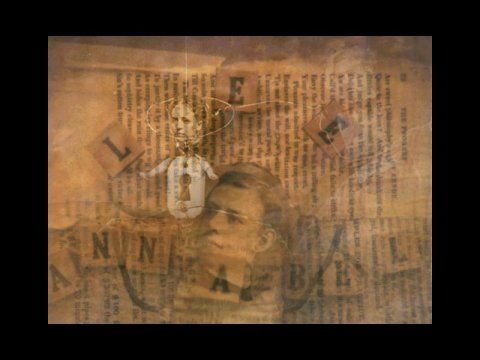 Unfortunately, it's when one begins to look at the actual gameplay of The Dark Eye that it falls apart. Each story has a particular, single narrative line through it - one that must be strictly followed. This makes sense, since all are based on existing, linear writings, but can be incredibly frustrating if you don't know where the story's supposed to go next.

Worse yet, even if you do know what's supposed to happen next, it might be impossible to deduce how to make it happen. There are several actions required of the player that are completely uncued and can only be found by randomly stumbling about. One action might be looking at a particular object from a particular angle. The story will simply refuse to continue until you look at the object - even though there seems to be no narrative or logical reason for you to do so.

One of the most frustrating portions of the game involves a literal maze of tunnels. The worst part of it is that you'll need to negotiate the maze two times - once for each character you play. Annoyingly, even though one character leads the other in the original story, your character somehow ends up in front in both cases. 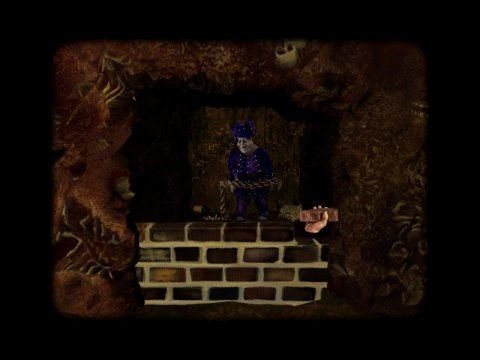 Finally, the game provides a feature that confused things more than anything else. At various points during the Poe stories, a character's eyes will shine. Clicking on the eyes results in what the manual calls a "soul jump," in which you leave the character you're playing and enter the body of another. Since each story must be run to completion as one of the two characters, soul jumping really doesn't accomplish anything that choosing the other character from the beginning would do. At worst, you may accidentally jump into a character whose story you've already completed and not have an opportunity to get back to one you haven't before the story ends.

Still, the accounts themselves are beautifully told. The audio is commendable, the music appropriate to each section, and the voice acting professional and wonderfully done (William S. Burroughs plays the house's owner, as well as providing readings of Poe's "Masque of the Red Death" and "Annabel Lee"). There are wonderful twists of narrative, portions where the standard first-person view is warped by visual oddities, and places where the standard interface is turned on its head to better serve the story. It's clear that the team behind the game was both incredibly talented and huge fans of Mr. Poe's work.

In the end, The Dark Eye is simultaneously one of my favorite games and one of the most frustrating that I've ever played. It's stunningly beautiful, well-thought out, atmospheric, eerie and frightening--much like the works of Edgar Allen Poe. At the same time, it really doesn't work as a game. There are portions where, even if one knows the source material, it's almost impossible to guess the action or actions that will push the story forward. As such, I can't unreservedly recommend it.

The game's developer, iNSCAPE, is unfortunately now defunct and finding a copy might take some doing. I found mine in a bargain bin at a computer show and considered myself lucky to have done so. Despite its problems, fans of unique gaming experiences and Poe alike will find the well-told narrative and haunting atmosphere of The Dark Eye make it well-worth seeking out.

An inspired attempt at creating an interactive world based on the works of Edgar Allen Poe. Highly recommended as a unique experience, much less so as an actual game.

GAME INFO The Dark Eye is an adventure game by Inscape for PC. It has a Stylized art style and is played in a First-Person perspective.