Review for Gabriel Knight: Sins of the Fathers

We get a small commission from any books sold.
Written by
Dan Ravipinto — January 16, 2004

An older man watches the fire, caught somewhere between his fear and the eyes of the dark woman who holds his gaze. A tear trickles down his cheek. She burns and grimaces and looks to the heavens - and as she does so she changes. Her features warp, twisting into an animalistic parody -- and then settle into those of a leopard.

He gasps as the snake coils about his neck, tightening, becoming the dark brown of a noose caught in the rain, the breeze. The rictus of his mouth glistens in the lightening.

Images -- a knife, a medallion, blood. 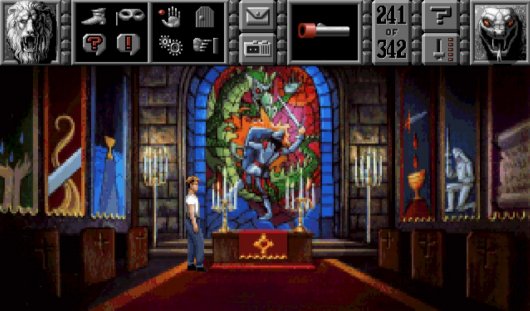 And Gabriel Knight awakens with a scream...

So begins Sins of the Fathers -- the first chapter in the Gabriel Knight series. Gabriel is a struggling author who has been trying to write his latest novel for weeks, to little avail. And now his strange nightmares are getting steadily worse. 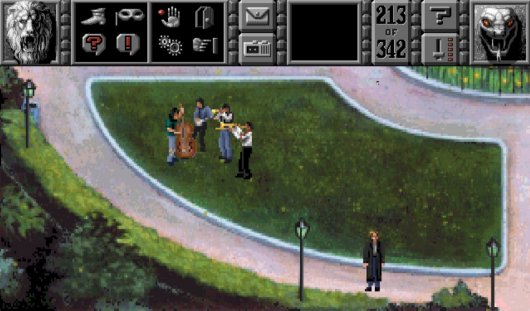 The game follows his slow discovery of his family's history as he investigates what the police are calling the Voodoo Murders in his own backyard, New Orleans. Starting as a simple attempt to find a little atmosphere for his book, he uncovers a world he never knew existed, where the battle between good and evil takes on very real dimensions.

Gabriel works along side his assistant, Grace Nakimura, who runs the rare book shop he owns in the French Quarter. Grace's part in the first episode is minimal. Rather than being a playable character, she acts as a resource for Gabriel, performing research whenever she's asked. Together with Gabe's childhood friend, Detective Mosley, they learn of the secrets buried in Gabriel's family history and face the evils that have grown to fruition in the rich soil of New Orleans.

Sins is one of the many 2-D games Sierra produced, and the company's long and excellent history in the genre is evident. The hand drawn backgrounds and characters might seem a bit pixilated against the rendering technology of today, but they've lost none of their charm. Of particular interest is the use of a "comic book" style for several of the game's climactic scenes -- single, still panels appearing layered over one another. 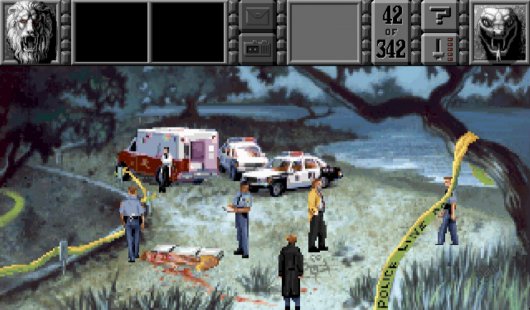 The sound is very well done -- although implemented only in MIDI or SoundBlaster format. Leitmotifs appear in the music; there's a definite "Gabriel theme" that's established in the opening, and variations of it appear throughout the game, and indeed, the rest of the series.

The interface is a more detailed, complex version of the point-and-click functionality that appeared in King's Quests V and VI. Instead of a simple 'use' command, players must choose among 'push', 'operate', and 'take'. There are even two different operations for communicating with characters -- talk and interrogate. This finely-tuned interface allows users to be more precise in their actions.

The game was originally released in two formats -- disk and CD, each containing both the DOS Windows versions. The CD version had the added bonus of a full audio track, including voiceovers for all of the characters -- including the narrator. The voices are all done by Hollywood talent -- including Tim Curry, Mark Hamill, Michael Dorn, and Leah Remini. While some of them (Remini as Grace, particularly) work wonderfully, Curry's attempt at a Gabriel's New Orleans drawl is so overdone as to sometimes be grating, especially when put against the more authentic accent of the game's female narrator. 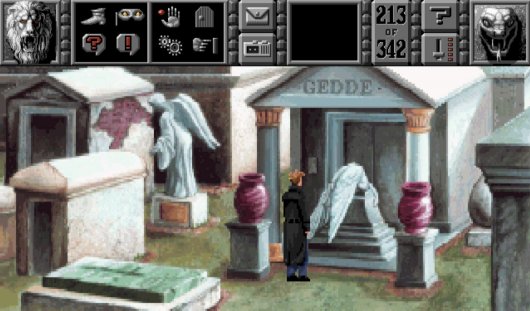 That being said, Sins of the Fathers is one of the best adventure games ever written. The mysterious premise is the perfect hook to pull the players into the supernatural world of Voodoo-haunted New Orleans. The player follows Gabriel step-by-step as he interrogates witnesses, finds clues, and slowly pieces the puzzle together.

The game is broken up into a set of ten days over which the story is told. Each day opens with a cinematic of the sun rising over the French Quarter along with a rhymed couplet -- a small part of a poem that is revealed in the course of the game. Each opening continues as Gabriel wakes up, grabs a cup of coffee and talks about his current situation with Grace. Between the couplets and the conversations, the player is given a clear set of goals to accomplish before the next day can continue, though the required actions to complete some days are not as logical as they could be (I'm thinking particularly of the ones revolving around what the poem refers to as "Bacchus' abode"). 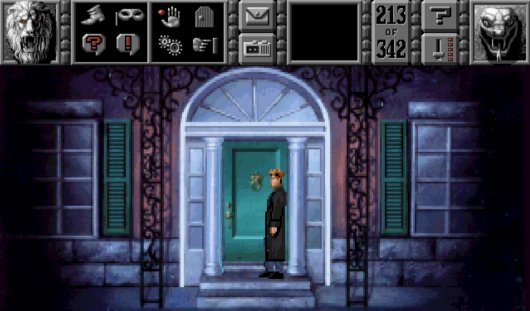 Conversation is a big part of the game play and is done through a rather elegant menu system. On either side, close-ups of Gabriel and his subject appear -- these look particularly good under VESA hi-res graphics option. The menu is a conceptual inventory -- a list of ideas and subjects that Gabriel has come across in his investigations. Clicking on one will cause Gabriel to ask a question pertinent to the situation at hand. Sometimes, the questions will lead to sub-menus of further lines of inquiry. Adding to the sense of atmosphere, all of the audio is lip-synched with the character close-ups.

Along with the interrogate tool, Gabriel also has the ability to simply chit-chat with people. This, combined with a fully-realized set of questions for each character about themselves, fleshes out the characters wonderfully. I spent much of opening of the game simply looking around the shop and asking Grace about herself and her background. The game includes a virtual tape recorder which Gabriel uses during his investigations. Using it, the player can replay any past conversation he's had -- which can be very useful in piecing together what's already been learned.

The puzzles are almost universally logical and well-implemented. One or two, while still straightforward, are less well-integrated, and are only noticeable because the rest of the game world is so well crafted. However, most of the puzzles are wonderful examples of their craft -- conundrums which force the player to utilize several sources of information and not a little intuition to complete. One particularly memorable one involves the decoding of a secret Voodoo language, and the creation of a new message towards a particular end.

The depth of the background material the game is based on is amazing as well. The history of New Orleans, the slave trade in the West Indies and the United States, the Haitian slave rebellion, Voodoun and African tribal religions all figure into the story of Sins of the Fathers.

The high point (and swan song) of Sierra's 2-D adventure era -- a wonderful introduction to the characters and world of Gabriel Knight.

GAME INFO Gabriel Knight: Sins of the Fathers is an adventure game by Sierra On-Line released in 1993 for Mac and PC. It has a Illustrated realism style, presented in 2D or 2.5D and is played in a Third-Person perspective.