Ghost in the Sheet review

We get a small commission from any books sold.
All Bitmap Books
Written by
Heidi Fournier — January 14, 2008

While being dead doesn't sound like much fun, being a ghost has a lot of possibilities. Unless, of course, you're forced to wear a sheet to hold together the ghostly bits of yourself and facing an afterlife of civil service. In the aptly named Ghost in the Sheet, you play as just such a character. After being run over by a car, there is no light to be seen that will send you into the embrace of the eternal happiness of heaven. Instead, you seem to have gotten stuck in a bed sheet and working for a grumpy boss who wants you to investigate some strange occurrences at a factory called Sector Omega. A life of ghostly P.I. work appears to be your destiny.

The factory you are sent to snoop around seems to be abandoned. It also appears to be in terrible shape. Whether this is from neglect or purposeful destruction is not instantly apparent. You will need to do some exploring to get more information. Though starting from such a simple premise, the story starts to get a little confusing and murky with unanswered questions as it unfolds.

Like many adventures, particularly other first-person slideshow-style games such as this one, there is a fair amount of reading, starting with a factory worker’s journal. This account provides the player with most of the backstory for the game. However, the factory is also littered with papers, many of which will need to be examined in order to glean clues as to what happened to the factory and the people who worked there. 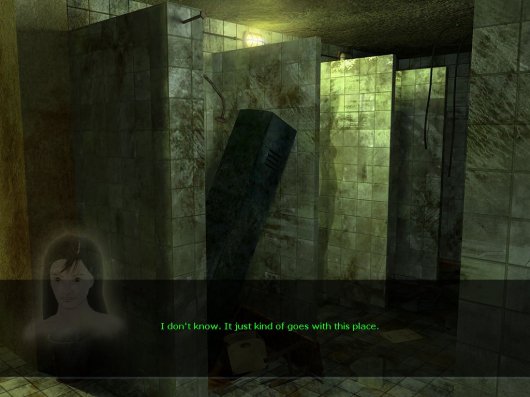 Unfortunately, this reading doesn’t really create the atmosphere of mystery and interest it should, because the story just isn’t that engrossing, and it doesn't answer all the questions it raises. Even by the end of the game there are huge holes in some of the logic. Like why Ghost in the Sheet, as he is referred to in the game, is sent to figure out what is happening at Sector Omega by his Afterlife Boss, though it seems to be the opposite of what he actually wants. Huh? The story is not helped by the dialogue, which is not good. It is full of clichés and jokes – wink, wink – that fall flat. And during conversations, the dialogue trees do not automatically update. So exhausted lines of questioning don’t disappear from the screen or indicate that they've been explored, causing confusion at points about what has or has not been discussed. This is really strange; I am totally confused by this design choice.

To plot a route through the game, you will use a node-based, point-and-click navigation system. The mouse will change shape to indicate where you can move and what objects you can inspect closer or use. Many times clicking on an object invokes Ghost in the Sheet to provide you with some information about it. Sometimes this information is helpful, revealing numbers or information about events in the factory; other times, not so much. For some reason, the factory seems to be full of empty buckets, all of which seem to be active hotspots, but often with little or no meaningful information attached to them. If there is a reason why they are scattered all over the place, it is never explained to the player.

As a ghost, and a novice ghost at that, you're limited in how you can affect the world physically, so you'll need to acquire some special abilities along the way, including such skills as telekinesis, listening, and lightening dark areas. After learning each new skill, you can easily access it with a keystroke or by clicking its onscreen icon. Getting used to working with some of these abilities takes a bit of practice. I often found that I tried to push objects before I turned on my pushing ability, and I'm not sure why you're limited to only one active skill at a time. The experience would have felt much less contrived with a seamless progression of skills you can use freely any time after. I also didn’t care for the fact that you have to turn each special skill off in order to go back to moving around the environment. 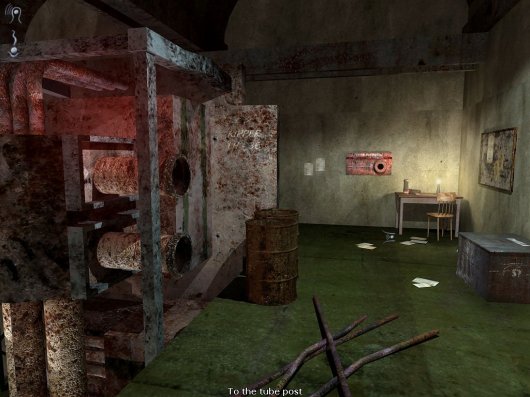 There is no camera panning built into the game. In fact, at the beginning you can’t even move left, right or turn around, which stifles the natural impulse to explore, feeling almost claustrophobic in the early going. Fortunately, as you move further into the game you will find that more environments open up to you. But this movement is still very limited as you can’t zoom in, look around, or move in any direction you wish. The default node placement, meanwhile, is sometimes disorienting, bringing about instances where you're unsure of your place in the current environment. Hotspots also tend to be strangely positioned; some seem to be located far from the graphic element they are supposed to represents. In one area I found the hotspot to take me down from a catwalk almost clear across the screen from where I was standing. This type of funkiness happened a few times, but mostly I noticed it when working with buttons, which have to be clicked at exactly the right spot to work. Rule of thumb, if the description of the object you are attempting to use doesn’t show up at the bottom of the screen, you are not on the hotspot.

The voice work is very nicely done, with each character voiced by someone who sounds believable as a (former) fireman, deranged engineer, Human Resources officer, or obsessive doorman. The synthesized soundtrack is a weak spot. Most of it is looped and completely unmemorable. However, the ambient sounds are effective, with a lot of growls, scraping, moaning, and knocking. All of which you would expect in a game about a building populated by ghosts. You do have the ability to turn down both the sound and the voice work if you so choose; I did.

There are a few minor cutscenes in the game, but for the most part the designers decided to sidestep the issue of cinematics by using static black and white tableaus to represent actions that would normally be done with a cutscene. These are nicely presented, and the only problem I had with them was the fact that the slides take so long to transition, with no ability to click through manually. 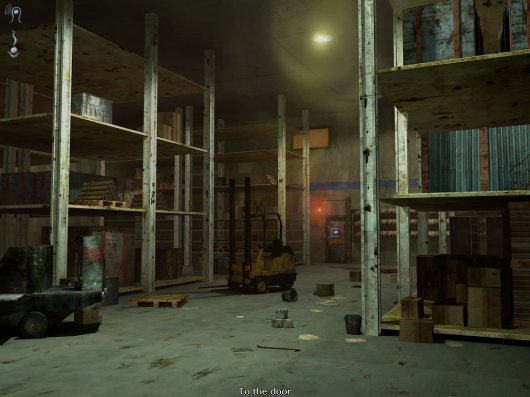 The designers also included a few small animations, such as glowing chemicals, glittering bugs, and smoke escaping a pipe. These are nice little details to enhance the overall graphic design of the game which, while not eye popping and colourful, is well executed. Since the whole story takes place in a deteriorating factory, all the industrial equipment is covered in textures that effectively display its tarnished grit and decay. The character models are intentionally unrealistic, looking distinctively less than human, and the style suits the game nicely. For instance, one character is a transparent blue ghost, another a rather sexy shadow in a shower stall, while two others are presented as strange looking monsters.

The game does not contain a large number of puzzles, but there's a fair bit of variety in what is included. Besides the almost required push/pull lever puzzles, the "press the right five buttons to turn on the machine" challenges, and one board game-type puzzle, you also have a couple hand-eye challenges. Neither of these is particularly difficult, but should you decide this type of test isn’t your strong suit, you can quickly bypass them with a keystroke, which is a nice touch that more minigames should include. Though the game doesn’t require you to carry any inventory, there are individual objects that you have to move or manipulate (once you're able) in different ways to complete puzzles. There is one puzzle where you can die if you fail, but the game just resets to the beginning of the puzzle in that event. In general, the puzzles are fine, but there isn’t anything new going on here and none of them are particularly clever or engrossing or took me long to work through.

Overall, Ghost in the Sheet is a decent first game for a small team of new developers, with an interesting premise of playing a ghost and some clever ideas for bringing that about, but its execution is marred by some notable weaknesses. The voice work and graphic design are both well done, if a bit utilitarian, but the dialogue and story need polishing to create a strong immersive atmosphere that a game like this really requires. The introduction of new abilities is a novel approach, though more thought should have been expended on making them them easier to use. If the developers can apply the same creativity and spark of imagination they used in other parts of the design to the writing next time, I think their sophomore effort will be a great game. In the meantime, however, Ghost in the Sheet is a bit too hit-or-miss to recommend wholeheartedly. Given its ease, I'm inclined to say that the game may be of limited interest to experienced gamers and best left to those who are looking for a light challenge and are willing to live with the faults in exchange for something a little different. Or to those who just want to know what life after death is really like. Just don't be surprised if the afterlife experience isn't everything you hoped it would be.

Several of the game’s elements demonstrate promising signs for a new developer, but a weak storyline ultimately marginalizes them in this debut effort.

What our readers think of Ghost in the Sheet