Review for Journey to the Center of the Earth

We get a small commission from any books sold.
Written by
Tom King — November 10, 2003

Journey to the Center of the Earth, a new point & click adventure game by the developers at Frogwares and published in the US by Viva Media (formerly Tivola), borrows heavily from the classic novel of the same name by Jules Verne. It’s quite a task to adapt a novel to a movie, let alone an adventure game – which is perhaps why Frogwares chose to borrow the general idea of the novel instead of following the stricter confines of the original story.

As such, the game tends to stray far enough from the novel itself to feel more like a “What If” issue from the Marvel Universe. Remember those? If you were like me, and enjoyed these excursions from the familiar, you’ll probably equally enjoy Journey.

In touch with the Inner Earth

The intro of Journey opens with the game's heroine, a photojournalist named Ariane, taking aerial pictures of some Icelandic scenery for a scoop. Suddenly, the helicopter she is in loses control and crash-lands. She narrowly escapes the wreckage, and after she pulls herself free, you gain control of Ariane. The pilot disappears, as pilots are wont to do, leaving you stranded with what few supplies you could salvage from the ‘copter. Among these various items you will find a laptop that will shortly become indispensable to you in your exploration. 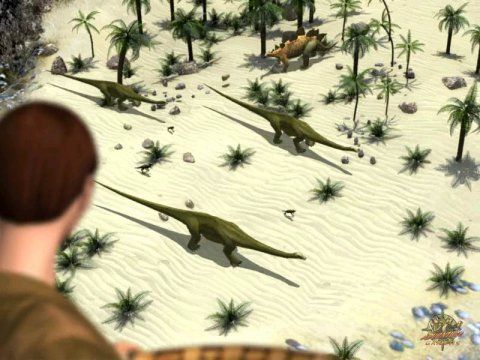 Your journeys will eventually take you under the earth’s surface where you will be treated to many varied landscapes, peoples, and cultures. It’s a land where magic-practicing giants roam the inner earth and where dinosaur and man coexist in peaceful habitation. Things then begin to happen to clue you in that someone perceives your arrival as a threat to all of this. While all you’re trying to do is find a way out, you soon find yourself embroiled in a conspiracy where journalistic curiosity could yield terminal results.

As mentioned, the interface is traditional point & click. The laptop remains on the left of your inventory, and can be accessed at any time to read various documents you acquire, retrieve a few sparse communiqués from family and friends, and a news update now and then. It will also serve as a dispenser of clues from certain items you pick up.

Journey features a host of 2D pre-rendered backgrounds, and 3D real time characters. Graphically, it rates near to Benoit Sokal’s Syberia in detail and artistry. In fact, I was equally as pleased with the graphics in Journey as I was in Syberia. The locations you visit are diverse and richly detailed, and it’s becomes immediately obvious that painstaking effort went into each one of them. Frogwares certainly know their visual craft. 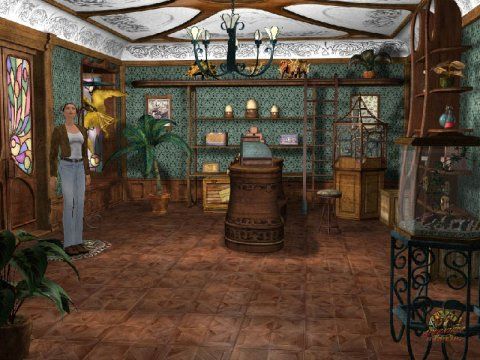 This variation in locations, as well as certain segments of the games story, are also reminiscent of The Longest Journey in terms of the fantastic. Though the contrast is not quite as stark. [See pun] The primary difference is in mood, which isn’t quite so artfully fashioned as that experienced in Syberia, nor as highly developed as TLJ. More like the lighter side of Alice in Wonderland without the gregarious characterizations.

The characters, and there are quite a few of them, are where Journey could have used a little more fleshing out. Ariane herself appears as a sylphlike supermodel but with a hard-line attitude appropriate for a journalist. Her voice acting was sufficient but not memorable.

The rest of the characters, while enjoyable enough and never particularly grating, simply never meet or rise above that red line you see on all those United Way posters beside the word “Goal.” There’s an enigmatic man named Adam who, much like the Cheshire Cat of Wonderland fame, has a propensity for popping up here and there in the most unlikely places. Besides his and the voice of Ariane, there isn’t a terrible amount of feeling in the delivery. 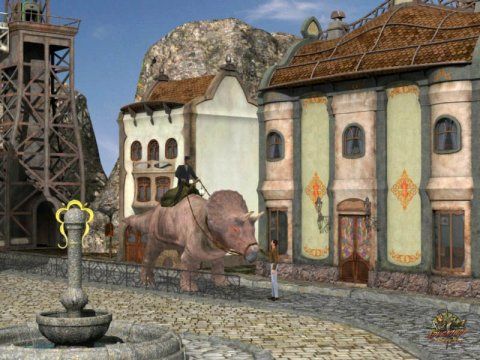 Journey actually purports to have two different endings, and indeed it does – however, the first ending comes at the sacrifice of your truer sense of closure. To end the game the first time, you simply go through a door at the end of the fourth level. It certainly feels a little premature, as every plot line was tied up in a nice little bow with an end movie dump. If you elect to take the other door you will experience two additional levels and it actually feels like you’re continuing to play the game out in the way it was meant to be played.

The first four levels can be completed in about 20 hours, so while you don’t want to cheat yourself, go ahead and end it and watch the movie, it’s a lot of fun. Now go back to that saved game and take the other door, because you’re in for another five or six hours more! To name just a few; the beauty of Journey, as well as curiosity about the identity of Ariane’s conspirators, adds to the games surprising ability to hold interest for this long.

One of the things that I really appreciated about Journey was the near complete lack of backtracking due to missed inventory items or an ill-engineered puzzle. Those few times when you have a “doh!” moment and realize what you need is a few screens back, the scenery’s so nice, you don’t mind seeing it again on occasion. It’s worthy to mention that Ariane does jog at a decent pace upon double-clicking. The “+” sign can also accelerate animations and make her move faster if you’re the impatient sort. 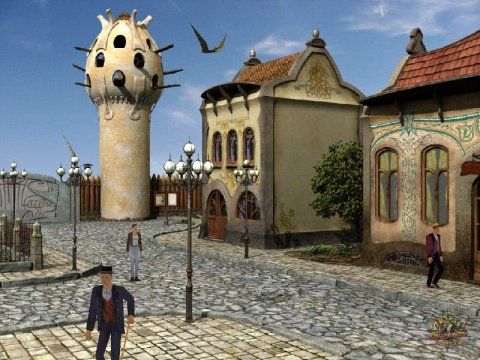 Sound effects are very well implemented, matching the setting for each scene. The soundtrack primarily features a very dramatic, James Horner-esque track that I wouldn’t mind hearing more of, independent of the game. It's very pleasant to listen to, but most of the time you will be expecting to hear it with more variation than is offered. The same swell gets repeated quite a bit during cut-scenes.

The varying difficulty level of the puzzles in Journey would appear to be an attempt to engage the range of neophyte to savant. There are the typical inventory combo puzzles which follow a certain serious logic, and most of which are accomplished within the room or scene that the object is found.

There’s a tanagram that was quite fun to solve, a clever puzzle involving the use of scales, and various dialogue-driven puzzles. Then there’s the “Oh my God” puzzle that causes you to lose sleep, hair, and your appetite – but when you finally do solve it, the elation that results is similar to that generally said to be found on the grounds at Woodstock. Personally, it would have been gratifying to have had some puzzles that made clever use of Runic symbols, the kind of which Verne referred to in the novel. There are some references that pay homage to the writers work though, and it’s fun when you find them. 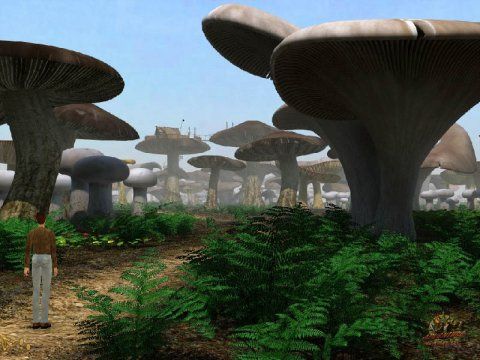 One particular cause of ire: the cursor wasn’t always honest. The precedent that is set is that when you move the cursor upon a person, a head will appear indicating conversation. If you move it atop a hot spot, it will show a hand. There was at least one instance when a head failed to appear beside my cursor, and I assumed the NPC could not talk, so I didn’t click. When in fact, it became clear much later that I needed to talk to that particular NPC to proceed in the game. The same could be said of the hand icon, or hot spot indicator. At times you’ll move your cursor over an item that appears as though it may be something to add to inventory, but no hand icon will appear. So you’re thinking you should just move on because there's nothing there, but you click anyway and low and behold comes the swoosh indicating a new item has been added to your inventory. So yes, don the fine leather cap and coat of the pixel hunter and hold steady your mouse, though you’ll need to do so on mercilessly few occasions. There were two that I can particularly recall. If this is a bug, I hope you don’t run into it. If this was part of the “puzzle” in figuring out what to do, it was a little sneaky and poorly implemented.

While Journey doesn't represent a masterstroke in adventure gaming, nor is the character development and story meaty enough to merit engraving on the Top 20 stone tablets, it is certainly a solid adventure game whose beauty and charm cannot be denied. The low MSRP of $19.99 came as a bit of a surprise to me, as I have paid much more for what turned out to be mediocre titles.

From the last chapter of Verne’s novel, as referenced in bold above, I submit this quote but with one italicized replacement: “Such is the conclusion of a review which I cannot expect everybody to believe, for some people will believe nothing against the testimony of their own experience.” So what are you waiting for? You heard the man, go experience it for yourself!

WHERE CAN I DOWNLOAD Journey to the Center of the Earth

Journey to the Center of the Earth is available at:

This game has a surprising charm and beauty, with enough depth to keep you playing until the end. A solid pick that will surely satisfy.

GAME INFO Journey to the Center of the Earth is an adventure game by Frogwares released in 2003 for PC. It has a Illustrated realism style and is played in a Third-Person perspective.