We get a small commission from any books sold.
All Bitmap Books
Written by
Heidi Fournier — December 5, 2006

I like the kind of gumption it takes to say, "what the heck, let's create an adventure game ourselves." Be honest, most of you have thought about it. But have you done it? Exactly. We are not talking about something that you can whip together over one crazy weekend of Mickey D's and a bottle of stout. There are all sorts of questions to be answered. What's the story? What technology do we use? What technology can we AFFORD to use? Will our parents let us live in the basement for free while we do it? These are not easy questions to answer.

Yet there seems to be a burgeoning indie adventure game community out there that is creating some interesting stuff. Time Stand Still is not the first independently developed game I have played, but I think it is one of the better ones, with a lot going for it both creatively and otherwise. As an indie title, there's no way it can measure up to more generously-budgeted, professionally produced games like Syberia in key production areas, but as a commercial product competing for your hard earned dollars, it can't avoid comparison entirely. Fortunately, the game delivers solidly in other important areas, while leaving room for improvement in future installments that we'll discuss in greater detail a little later.

Developed by Mikael and Eleen Nyqvist, Time Stand Still is the third game in the Carol Reed series, following on the heels of Remedy and Hope Springs Eternal. I haven't played the first two games in this series, but it does seem to me from the reviews I have read that the designers have consistently improved each game. Therefore, I think that if constructive criticism is continued to be heeded, the Carol Reed series should get better with each instalment, thereby closing the gap between its indie origins and professionally produced games. 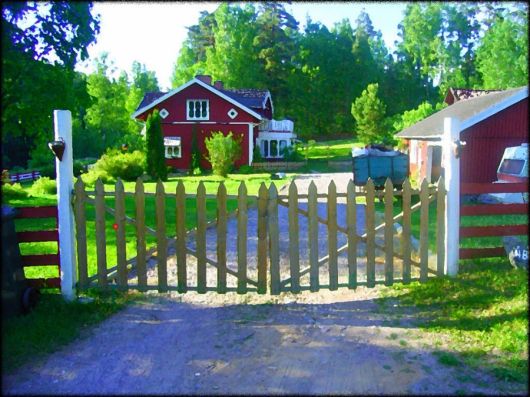 In this series, Carol is an expatriate Brit living in Norrköping, Sweden, which we learn is a lovely, brightly painted town with plenty of helpful folk. This time out, Carol is finding that her roster of potential clients has gotten a little thin. So she does what any self-employed sleuth would do: she goes in search of a case and soon finds one in the local newspaper. It seems someone or something has been stalking Solvig Liedberg's house. It doesn't take Carol long to learn that the house has a rather interesting and possibly sinister past. Not only was the house designed by famed architect Carl Bergsten, one of Norrköping's finest sons, but there seems to be some connection between it and a murdered Nazi scientist.

I was expecting a really quick game, but it took me about 15 hours to play Time Stand Still, which is a very respectable amount of gameplay. The only complaint I have with the story is that it peters out towards the end. I was exploring and piecing things together and then -- poof -- we were done. The ending felt like it came out of nowhere. There were a couple of plotlines that didn't get wrapped up, and some questions that I didn't think were answered to my satisfaction. Don't leave me hanging! Wrapping up the separate subplots and applying logical consistency would tie up the various threads of the game in a much more fulfilling way.

Along the way are a number of very pretty game environments. I am not sure exactly how the graphics were done, but the style will be instantly recognizable to players of the first two Carol Reed games. They appear to be a series of photos taken around Norrköping and then put through a watercolour filter process with a product like Adobe Photoshop or Director. This is quite clever, actually, creating a very distinct look while using readily available graphic utilities. The graphics reminded me to a certain degree of The Last Express, which uses a type of animation called rotoscope. This process uses recorded video and then converts it to a type of animation. I have always found rotoscope to be too jerky and I've never cared for it much, but Time Stand Still uses a slideshow format, so while there is a similar effect added to the slides, they aren't as disconcerting to view as they're static to begin with. And Norrköping seems to be a beautiful place. It is now on my list of places to visit if I ever get to Sweden. It appears full of lively architecture spanning the last few hundred years, wooded trails, and pretty streams. 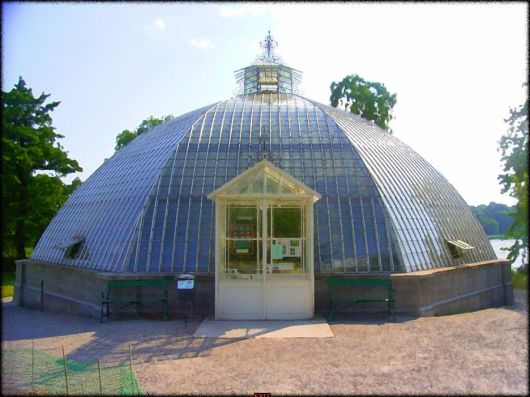 Time Stand Still, however, is lean on puzzles. This should not be confused with the exploration and character interaction, of which there is plenty. Carol gets around Norrköping quite a bit in her effort to piece together the mysteries surrounding the Liedberg's house. This keeps the player rather busy. But if you love to play a game with lots of puzzles, this game will disappoint, as there are not many here, and the ones that are included are all pretty much a variation of slider puzzle. None are especially difficult if you've paid attention and kept good notes. If not, they can easily be skipped using the 'bypass' function that instantly solves the puzzle for you. However, a player might get mired down in where to go next in the game world. As I have never played a Carol Reed game before, this was my first experience with her world. I suspect if you had played either one or both of the previous games, you would have met some of the characters before and would have a better grasp of their roles in the game. Since I didn't, I found there were times that where I needed to go next was not especially obvious.

Navigation is done use the tried and true, node-based point-and-click system adventure gamers know so well. Basically, you can go forward or turn left and right, and at a few points you can look down. One thing that I really felt the game was missing was a turn around option. As I am sure many of you do, my first time through an environment I sniff through every direction I can, but often in Time Stand Still, I got to the end of a path and instead of being able to just turn around and head back I had to click left or right two times, which I found very disorienting at the beginning of game and especially in certain environments where a lot of the scenery looked similar. I don't know if this is a shortfall of the game engine the Nyqvists are using or if it was just an oversight, but I think it would improve navigation in the next Carol Reed game.

The user interface is also a picture of simplicity, stripped down to the essentials: load, save, exit. There is also an inventory system that the player must use. It is straightforward and easy to figure out. If an item can be picked up, it is automatically put into inventory. The inventory comes with a handy magnifying glass so you can look close up at objects, something I suggest you do often. The inventory hides along the top of your screen until you mouse over it. It all adds up to a very uncomplicated and slick interface. 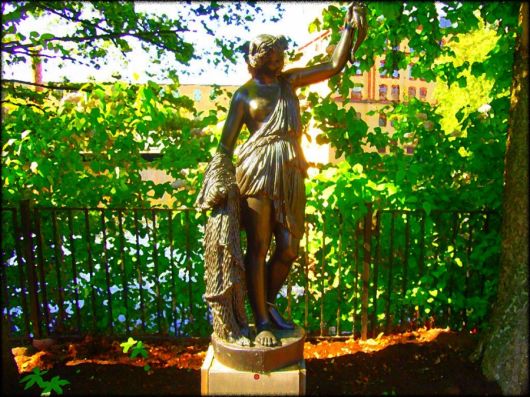 Where I think real improvement could be made, and probably a lot of money saved, is in the soundtrack. I am sure a substantial amount of effort was put into the music, but it isn't really necessary. Looped soundtracks are generally unwelcome, especially if you can't control the sound level in the game. At first it might add something to the atmosphere, but that benefit is lost as soon as it starts repeating. Really it would be better to buy or record a variety of sound effects and employ those where needed: creaking doors, crunching leaves under foot, fingers on a keyboard. Ambient sounds go a lot further in working on the mind of the gamer than the repetitive strain of piano cords. The developers could save some misguided effort in this department in the next instalment; old fogies like me will thank them.

I do like how the designers faced down the potential problem of how to incorporate characters into the game. They did so by including a series of still images of each character. I can imagine that figuring out how to deal with this issue in a technologically friendly and cost effective way must keep developers up nights. The method used here reminds me quite a bit of the characters in Titanic: Adventure Out of Time. I know that game is ten years old, but working with a budget does have its limitations. And looking ahead, Titanic should give the Nyqvists some ideas how to improve their set-up. Those characters were still images as well, but they had some mouth movement, and I think this would be an improvement over the very slight movement in poses we see in this game. I know even the Titanic model is not perfect, but I think it might help take future Carol Reed games to the next level. Besides, let's face it. Even in brand new retail games like Nancy Drew, the characters are little more than lip-synched talking heads.

Voice work is good, especially when you consider that English is not the Nyqvist's native language. Unfortunately, volume control for the voices is not separate from music, so there's no way to turn down the music without missing out on the many conversations. That's a shame when you consider how much work went into character design and creation. 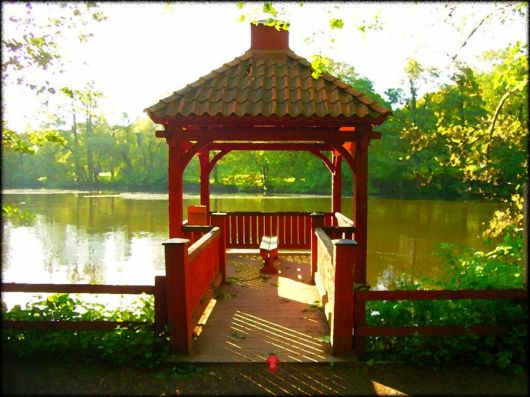 Overall, Time Stand Still has a lot of good things going for it. I appreciated the substantial amount of gameplay, most of which is essential to developing the storyline rather than simply providing a series of make-work projects. The game does end rather abruptly, which comes as a disappointment, and there are some story strands that are left unresolved. And while I enjoyed the graphics, which were bright, lovely, and worked well for the game, the soundtrack could easily be dumped in favour of ambient sounds, which would go a lot further to creating atmosphere.

Time Stand Still is available from the developer's official website, and retails for $18 USD, including worldwide shipping. This seems like a reasonable value for a pleasant, but fairly modest little independent game. I enjoyed my first experience with Carol Reed, and I'm looking forward to the next instalment to see how the Nyqvists have further developed their design skills.

Time Stand Still is a modest but enjoyable game. Its production values are not quite on par with professionally produced games, but it creates a nice level of anticipation for the next Carol Reed game.

GAME INFO Time Stand Still - A Carol Reed Mystery is an adventure game by MDNA Games released in 2006 for PC. It has a Stylized art style and is played in a First-Person perspective. You can download Time Stand Still - A Carol Reed Mystery from: We get a small commission from any game you buy through these links.
The Good:
The Bad:
The Good:
The Bad: 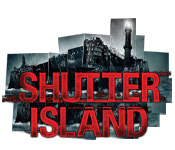 What our readers think of Time Stand Still