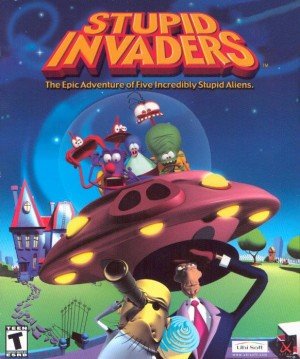 For the past few years I have been hearing gamers lamenting the state of adventure games, and the fact that many of them believe that games are too similar in story and style. Point in fact, how many times can one visit Atlantis before it becomes passé? With the arrival of Stupid Invaders, the world is about to be introduced to an old idea made new. In the vein of such games as Toonstruck and Sam and Max hit the Road, Stupid Invaders is fun and irreverent and at times surprisingly crude. Stupid Invaders is not groundbreaking, as it never strays too far from tried and true adventure game conventions, but it is very different from anything I have played in the last two years. Oh yeah, and it is full of toilets.

Stupid Invaders is based on a cartoon called Space Goofs that some gamers may be familiar with. If not, no need to worry. Lack of knowledge about the TV show will not hinder your ability to understand and enjoy the game or its crew of bizarre characters. For those not familiar with the cartoon, let me give you the Cole's Notes version of the game' s background and story. Our five anatomically incorrect ET's crash land on earth forcing them to hide out in an old mansion while fixing their spacecraft so they can return home. This has proven to be no easy feat, as they have been at it for 50 years. In this time they have come to the attention of a Dr. Evil -esque mad scientist who wants to, you guessed it, steal their spaceship and use them as lab rats. This forces our brave but not overly bright compatriots to escape a poetic gunman who utters clever little adages like "You are going to die and when you die you will be dead", steal dung from a dung factory, and play Simon says. No one ever said it was easy repairing a spaceship and escaping a malevolent scientist.

The graphic work done for the game is bold and engaging. Having just finished the dour Blair Witch 2, the colourful and vivid graphics of SI were a balm to these weary eyes. This is what graphs should be like gorgeous, luminous, and lively. Every colour is bright, bright, bright and just pops off the screen at you. The lighting is employed to provide detail, but never overshadows or washes out the vibrant environments. Though the game's environments are simplistic in their design, similar in style to the genie in Disney's Aladdin, they never cease to impress. In fact, while playing the game I had to stop so often to take screenshots to show you, our devoted readers, I feared I might never finish the game. Oh yeah, and they have tons of different graphics of toilets. 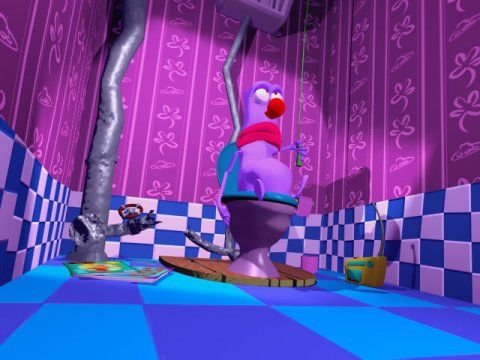 Stupid Invaders is not just full of toilets, mind you. It is full of toilet humour as well. The game includes a great deal of humorous repartee including the soon-to-be-classic catch phrase "It isn't over until the fat lady farts." Often the dialogue is just plain wacky, full of ingenious riffs on life, some so flat out crude you feel embarrassed to be laughing at them. Stupid Invaders is not as humorous as Sam and Max Hit the Road or Curse of Monkey Island, but when it delivers a laugh it hits a home run.

The majority of challenges faced by the aliens are exploration and inventory gathering tasks. At the beginning of the game I found that these hurdles where quickly and easily executed. This worried me at first as I found myself cruising through the first section of the game like grease lighting, but they grew more complex and difficult as I progressed further into the game. The problems never reached Black Dahlia like levels of difficulty, but there where one or two obstacles that will most likely give you pause. There are two important facts that all gamers should know about the barriers in SI before they purchase it, the first is that you can die in the game. The second is that you do… often. The circumstances of your untimely death will come from doing things that as a hardened adventure gamer have proven to be infallible in other games. Doing these things in SI will get you killed and it will make you paranoid. As I worked further into the game, I became increasingly gun shy about pulling levers, talking to other characters, and exploring new environments. This is not a bad thing, it actually heightened my enjoyment as all those old unspoken rules where tossed out the window and I started to ponder in what devious way the game was conspiring to do me in. The second thing is that the end of the game includes a huge maze. Mazes as I have said ad nausea are not only an unpopular cliché, but also a huge pain in the butt. Why do game designers keep hauling out this tired old chestnut? The main reason is to save time and effort, mazes are easy to create and in designer's minds they are excellent filler. 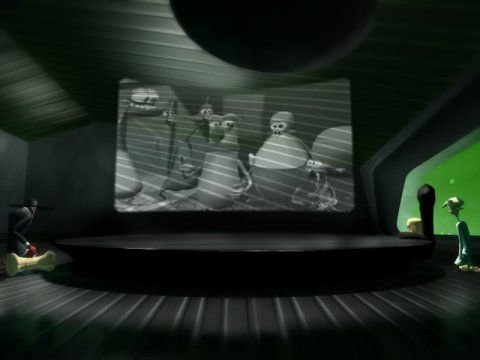 Stupid Invaders also suffers at times from a less than intuitive point and click interface. There were a couple of times I was unable to move my character in the direction I was clicking. At one point I had somehow managed to move my character to a point where I could not seem to get him to move at all and it took me a solid minute of frantic clicking to get him to actually budge. Luckily, the camera angles used in the game never take strange slants that would have hindered a player's ability to position their character. The game is also played from a third-person perspective making it similar in style to games like Sanitarium, rather than Myst style games like Morpheus.

Anticipation has been running high regarding this game and after playing it I can attest that it is not just hype. Stupid Invaders has a lot going for it, while not a funny as I was expecting, it is still a very humours game. With luminous graphics, dozens of different locations to explore, and a zany set of characters to interact with it is a value at the retail price of $30 US. Oh and it has toilets… lots of them.

GAME INFO Stupid Invaders is an adventure game by Xilam released in 2001 for PC. It has a Comic cartoon style, presented in 2D or 2.5D and is played in a Third-Person perspective.

What our readers think of Stupid Invaders