Review for The Longest Journey

Who would expect a previously unknown Norwegian developer to create such an absorbing and compelling adventure game? The Longest Journey is, quite simply, one of the best adventures ever made.

The story of The Longest Journey might seem a bit simplistic at first. There are two worlds, one of magic, one of science, and a Guardian to keep watch of the Balance between them. The Guardian abandons his position, and the balance is starting to crumble. An everyday girl happens to be the Chosen One [TM] with a Mission To Save The World(s) [TM].

The plot actually turns out to be far from superficial. In fact, it unfolds in such a gradual and natural way that I felt very compelled and intrigued. The story is not nearly as meaty as Jane Jensen's work, but what's there works well. Designer Ragnar Tørnquist has his roots in screenwriting, which really rubbed off on the story. April and her friends get more than enough screen time for the gamer to start caring about them. The first chapters of the game, in which the characters and the first pieces of the story are introduced, are a bit uninteresting. However, the set-up pays off very well in the later chapters (there are a total of 13). 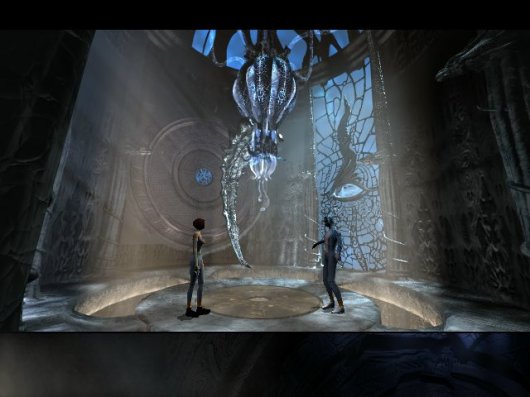 I never thought I'd say this about a computer game, but The Longest Journey is very socially aware. I am pleased to see a strong female character in the leading role. April Ryan is not the heroic Xena battle babe type. She's just an ordinary girl who all of a sudden gets her life turned upside down as she discovers the existence of Arcadia; a parallel world of magic and chaos. April Ryan has the power to shift between the two worlds, and discovers that she has a very important mission in life. The supporting characters are a mix of cultures, gender, sexual preferences and age, and are rarely used in the story as such. Tornquist gave each character its own personality; not just a different accent or stereotype.

The game has a grand and magical atmosphere. Right from the start, the gamer is treated with a visual feast of stunningly rendered full-motion video. The camera movements, music and dramatic lighting all testify of Funcom's understanding of drama and direction. It has been a while since I last saw video sequences that drew me into the game as much as these have. At times I couldn't do anything but gasp as strange creatures and imposing landscapes made their way onto the screen. The two contrasting worlds in the game are rendered with an admirable attention to detail. From the lush, green lands of Arcadia, to the futuristic skyscrapers in Stark (the world of science); each time April takes a shift to the other side, it truly feels as if she landed in another world.

The Longest Journey is a piece of art. I honestly wonder what Funcom could have done with the polygon-count of a Pixar production, or an ILM-sized budget. The graphics are far from perfect, mind you. The real-time rendered 3D characters often don't mix well with the 2D backgrounds, which sometimes even causes legs or arms to stick through solid walls. This doesn't weigh heavily in my book, though. The designers were obviously constrained by the limits of the 2D/3D-hybrid technology. On the other hand, The Longest Journey is very conservative gameplay-wise. If you are looking for technical innovation, such as Gabriel Knight 3's free-floating camera and Grim Fandango's 3D interface, look somewhere else. The Longest Journey is a traditional graphic adventure, which means carrying useless junk around in your inventory and searching for "hotspots" on the screen. In this regard, The Longest Journey doesn't break new ground. But why fix it if it isn't broken? I'm probably asking too much. 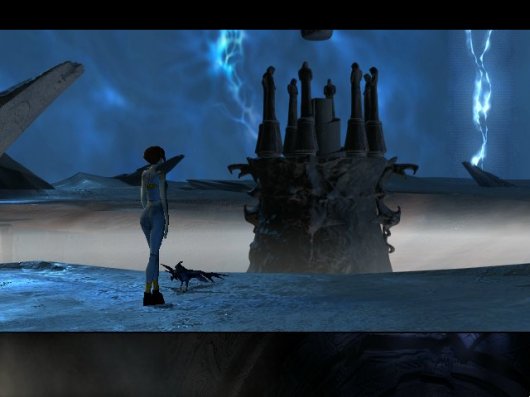 The Longest Journey feels like a breath of fresh air among the Myst-style games of recent days. I have decided to award this masterpiece with our highest score. Having said that, I really hope Funcom won't leave it with this. I think I am getting withdrawal symptoms…

(A word of warning: The Longest Journey uses curse words on quite a few occasions. It may be an important issue for some.)

The Longest Journey is available at:

An adventure game for the books!

GAME INFO The Longest Journey is an adventure game by Funcom released in 19992000 for iPad and PC. It has a Illustrated realism style, presented in 2D or 2.5D and is played in a Third-Person perspective.