We get a small commission from any books sold.
All Bitmap Books
Written by
Heidi Fournier — April 24, 2003

Noir, as in film noir, is that completely co-opted genre of filmmaking that was originally invented to showcase movie directors' cynicism with the world. In great movies like Out of the Past and The Big Sleep, clever plot twists, hard-boiled dialogue, and dangerous dames offered viewers an exciting glimpse of society's underbelly. Noir the game, however, is more like the girl next door's kid sister: underdeveloped in all the areas that attract attention, but with the loud bark that reminds you she's still there.

In an attempt to be true to the many movies it takes a note from, Noir's developers decided to keep all the graphics monochromatic. That's right, this game has less colour than your local newspaper. Many of its scenes are finely detailed reproductions, or touched up pictures of famous Los Angeles locations like Union Station. While this is a true treat for any noir aficionado, it will be lost on the vast majority of gamers not familiar with the trappings of the genre.

While the slide show sections are completely done in lush black and white, the full motion video (FMV) used throughout the game is not. It's grainy and fuzzy, often requiring the player to get this close to the screen to make out what they are witnessing. The scratchy FMV is amplified every time a player makes a transition between the two. This serves up a one two-punch that jags a player like turbulence at 3000 feet. 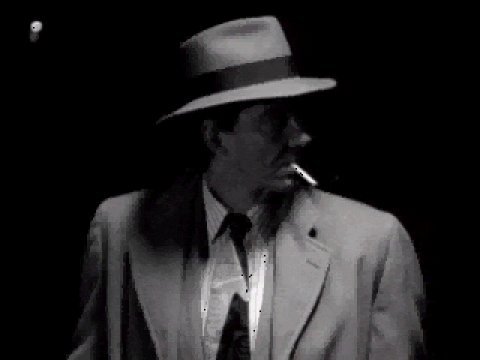 The majority of music used in Noir is muted elevator music of the unobtrusive, but completely forgettable type. It has the feeling of an afterthought, employed in a way that seems like the developers were attempting to save money. Not all of the soundtrack is relegated to this monotony; some of the game's characters do have their own signature music, but it is barely worth mentioning.

The story luckily triumphs over the inconsistencies in the graphics and sound. It is your typical murder mystery of the Raymond Chandler sort. We have the missing PI, who has left you to solve his caseload. As with many stories in the genre, most of the cases in your possession are somehow connected and it is up to you to figure out what a fading movie star's prize pet has to do with a missing heiress. Though the sleuthing could have been better developed—plot turns tend to be handed out with too little work—you do get to figure out a fair number of interesting connections in an appealing environment. Noir's strength is the player's ability to explore some very exciting places, like a version of LA's China town circa 1940, Union Station, and a Garden of Allah inspired club decorated in a Moroccan theme. And I have to say the ending of the game did surprise me. Many games have an ending that is a foregone conclusion; Noir served up a finale that I didn't see coming. For me, this is reason enough to recommend the game. There are so few surprises in games or even movies today that I cherish the ones I get.

Though Noir is not on par with games like The Longest Journey, it was a unique, and sometimes even surprising game. Sadly, we are currently living in a marketplace where the game with the biggest gun wins. Games that take a risk in presentation like Noir don't get made anymore. Which is too bad considering that, with a little tinkering, this could have been a great game or an excellent jumping off point for a series of games, if it had found an audience. Today Noir is a very difficult game to find, though I have seen copies on the Game Trading Zone. If you are a true adventure gamer, living in this current drought of adventure games, then Noir is worth a dance around the floor. I think that like me you will appreciate it despite its deficiencies.

The game wasn't quite loaded, but it was definitely worth playing once.

GAME INFO Noir: A Shadowy Thriller is an adventure game by Cyberdreams released in 1996 for PC. It has a Live Action, Photographic style and is played in a First-Person perspective.

What our readers think of Noir