The best I can surmise is that the Arkonians were another in a long line of races or civilizations, alien or otherwise, who came under attack by some evil force and, although they apparently possessed the necessary means to defeat said foe (judging by the trail of breadcrumbs and nifty gadgets they left for me), decided instead to flee their world in the hopes that a lone adventurer would eventually come along and do it for them. Why should I do their dirty work for them? Why should I take it upon myself to defeat the apparently evil Ozgar? The answer to these questions is the same one that I’m certain I will one day give at my competency hearing: “Because a floating head told me to.”

So what exactly does it take to tackle the charge of the floating head and complete The Crystal Key? Given my opening statement, it shouldn’t come as any surprise that gameplay, for the most part, consists of wandering through a series of static, pre-rendered scenes solving the various puzzles left behind by the previous inhabitants. Fortunately, the puzzles themselves are mildly entertaining, if not especially challenging, and consist of a nice mix of inventory and environment-based scenarios, which are blended nicely into the gameplay.

If anything, the most challenging aspect of the gameplay was the fact that, despite being a predominantly linear game, you are often provided with little or no direction or objectives. I’m not by any means a fan of being led by the nose through a game, but I do like to have some idea of what my objectives are other than to “stop the bad guy.” I found myself on more than one occasion wandering aimlessly as I tried to determine what the hell I was supposed to do next. 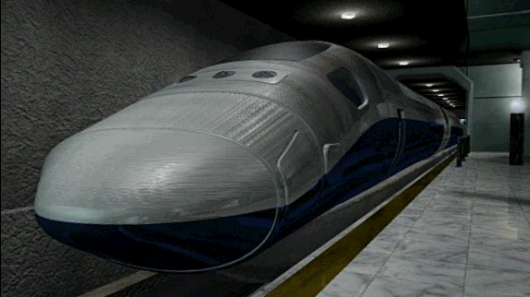 This may not have been such a tragedy, were the wandering itself not such a painstaking process. The Crystal Key is powered by the mighty Quicktime VR engine, of which I am not a particular fan. It may be suitable for taking a virtual tour of the Louvre on the internet, but I’ve always found it to be a slow, clumsy and unresponsive experience and mostly inadequate for gaming purposes. For the uninitiated, this engine provides the ability to pan 360 degrees at any stationary point so that essentially navigation in the game is comprised of the familiar first-person “node” system of movement.

Despite my qualms with Quicktime, I could have tolerated the game engine were it not for the fit-inducing, teeth-clenching, mind-numbingly slow scene transitions. I appreciate the fact that the scene transitions (which were uniformly well-done) were included, but given the extensive amount of back-tracking I had to do throughout the course of the game, I find it almost unforgivable that the game doesn’t include an option to disable transitions or even a nifty “warp” option to allow one to quickly move from one point to another (a la Myst or Riddle of the Sphinx) if they’ve already seen the transitions fifty times.

Graphically, the game’s pre-rendered scenes are fairly attractive, although unfortunately it belongs to the class of games hatched in the era when no one seemed to think that anyone would ever own a monitor larger than 15 inches; hence the game is limited to a paltry resolution of 640x480 (there is a patch available for download which allows it to be played at 800x600, but only if you don’t mind a game window roughly the size of a postage stamp). 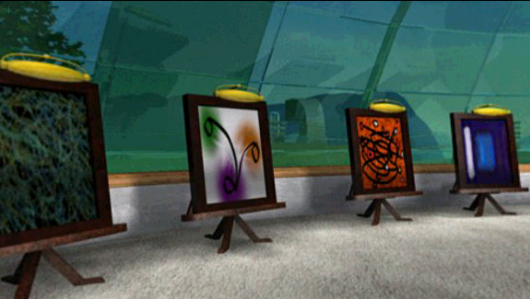 Aurally, however, there’s even less to speak of. The music and environmental sound effects are decent but not particularly memorable; but even less memorable is the voice-work, which consists solely of three brief video diaries (the aforementioned floating heads).

Ultimately, perhaps the most disappointing aspect of the game is the fact that, as a whole, it just feels like a half-assed effort at crafting an adventure. There isn’t anything terribly wrong with it, but by the same token, there isn’t anything at all inspired or original about it. The story is threadbare at best and the gameplay isn’t involving or inspired enough to make up for the lack of an interesting story or the clumsy game mechanics.

Who were the Arkonians? I suppose that I could have pieced together their story if I had so desired, but by the end of the game, I honestly didn’t give a damn. Luckily, however, the end came quick, as, among other things, The Crystal Key is incredibly short (I managed to finish it in a mere two sittings). And to reward me for persevering despite my considerable apathy, at the end I was treated to a single static screen congratulating me on saving the universe...not even a single floating head appeared to utter a word of thanks. Fortunately, countless years of performing thankless tasks have prepared me for this. You might not be so lucky.

It's been done before, and much better.

GAME INFO The Crystal Key is an adventure game by Earthlight released in 1999 for Mac and PC. It has a Illustrated realism style and is played in a First-Person perspective.

What our readers think of The Crystal Key