3 Skulls Of The Toltecs review 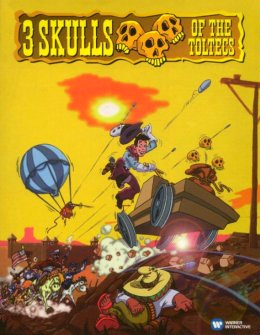 We get a small commission from any books sold.
All Bitmap Books
Written by
Former Staff — May 19, 2002

There's gold in them thar hills! Paint your wagon! Bonanza! and so on and so forth. I love Westerns; so much cliché spread over so many games, movies and books dedicated to frontier heroes that it's overwhelming. From the rugged, lonely gunman who shoots to survive, to the eloquent but deadly bad guy, from the docile sheriff to the saloon girls with a heart of gold. Imagine my joy that several well-known Wild West clichés safely made it into this game. Imagine that joy, because the reality is that I didn't get a great deal from 3 Skulls Of The Toltecs.

In this game, you take the role of Fenimore Fillmore, winner of the award for one of the strangest names possible for a leading character. Except you're not a rugged gunman. You play a young cowboy with a strange walk and an even stranger dress sense. We're not dealing with serious issues of cattle rustlin' on the prairie. This game is firmly set as a light adventure. You see, old frontier legend - the kind that a confused old cowboy could prattle on about for hours using words like "darn" and "yup" - has it that there's a fabulous treasure to be found in the desert. Only problem is, no-one knows where. That's where the skulls of the game's title comes in. The legend continues that three golden skulls which were once owned by the mysterious Toltecs will direct whoever possesses them towards the treasure. It's evident from the clothes your character wears that he's hard up for money, so the quest to find the skulls begins after he learns of the legend following the ambush of a travelling salesman.

You start off at the foot of a large canyon, watching a monk dig a grave, and to your left; the dead man. Exciting so far, huh? Yes, that was sarcasm. It's the usual scenario; little to do to begin with to help you get used to the controls. You won't need long with this game; it's standard adventure fare; your inventory and a list of commands form the bottom third of the screen, with the rest taken up by the location you're currently in. I don't know what it is, but the game reacted in a clunky manner whenever I tried a command; a bit more work on making the commands work more efficiently wouldn't have gone amiss. In addition, there is the frustrating element that your character follows a set route around a scene. So you could click on an enclosed fire right next to you but end up having to wait half a minute as - for no apparent reason - Fillmore wanders off into the distance before circling the fire and finally telling you there's nothing of note about it. 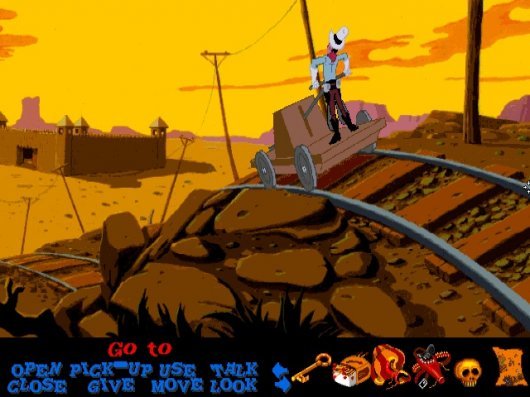 However, long distance travelling in the game is done nicely; there is a large birds eye view of the main town - Big Town, it's originally called (hint: yet more sarcasm) - as well as some standard Wild West locations; a frontier Fort, a spooky cemetery a la Boot Hill and several other places to explore. You journey around on a push-trolley on the train tracks, and getting from place to place is done mercifully quickly. Alternatively, you can travel some scenes on your trusty donkey. This didn't prepare me for what followed. Your donkey doesn't trot from location to location. He doesn't even stagger. He bounces. Yes, he bounces on all fours. Quite. It's strange touches like this that make the game now and again seem slightly eccentric, and not in a good way.

All of this is presented in fairly pleasant style; everything has a distinct cartoon feel to it, not least the characters who look like they've stepped out of a Lucky Luke comic book. Buildings - from the standard saloon to Fort Apache - are done well enough, and there's some nice in-game animation such as a flowing waterfall. Nice by cartoon standards, that is. I'm not talking about 3D crystal-clear waterfalls here. Overall, the graphics are above average and there are very few glitches whilst you interact with the objects that can be manipulated at the various locations. Don't believe me? Look at the screenshots and decide for yourself whether this game is appealing to your eye.

Cut-scenes fall into the usual trap; they look nice but often don't have a great purpose. Example: you find one of the golden skulls inside a tent at an Indian tent site. Can you guess what cut scene comes next? A five second shot of your character smiling with glee. And that's it. Sure, it's a nicely animated smile of glee, but is it necessary? The sad thing about throwaway cut-scenes like this in games like 3 Skulls Of The Toltecs is that it's often at the expense of effort that should have been put into the playable parts of the game. That's very much the case here, as control and language flaws could have been ironed out with some more concentration on the more important factors. 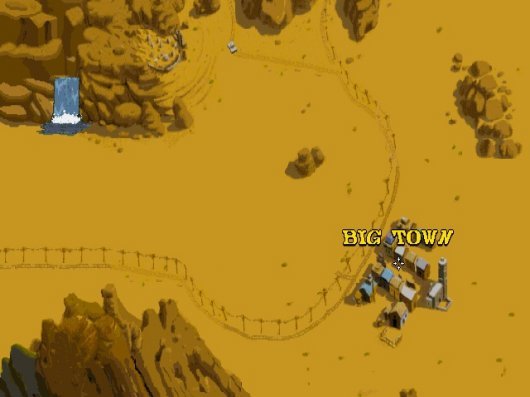 The humour in this game is not risqué. It's not even rude. Completely mediocre jokes, some that fall flat on their faces, abound as you talk to the characters populating the landscape. I do want to complain about one thing; there is a running joke about a nearly-deaf train station operator that isn't funny the first time round, and becomes more and more annoying when you realise you have to undergo the same joke every single time you speak to him. If the sound was a two way device with this game, you can rest assured that the station operator would have had no problem hearing my outburst of swearing when he misheard his 1572nd sentence of the day.

There are some strange things about the game. Not least the fact that your character's head wobbles from side to side whenever he talks. There's also apparently a French monastery deep in the canyon, and the first person you get to talk to is the aforementioned monk. Or you can try talking to dead man. Either way, the conversation will make little sense. In addition, there are some poor translations throughout the game; which is just sheer laziness on the part of the developers. Poor wording, wrong tenses and overall poor grammar don't do the game any favours. Now, my reviews often indulge in all three of those qualities. However, 3 Skulls Of The Toltecs positively embraces them. It gives the game a feeling of slapdash construction.

Everything about the sound in 3 Skulls Of The Toltecs - from the music to the voice-acting - hovers around, mostly just below, the average mark. Some offensively bad voice-acting adds to the damage caused by the mostly useless work put in, whilst the score itself is inoffensive enough that you won't really notice it's there. I've never understood skimping on music, sound effects and voice acting. They're just as important to a game that offers them as, say, the graphics. Compare the work done in Redjack to the work done in Grim Fandango and you'll see a difference; the latter uses voice acting to add to the gaming experience, the former to make it even more of a pain. 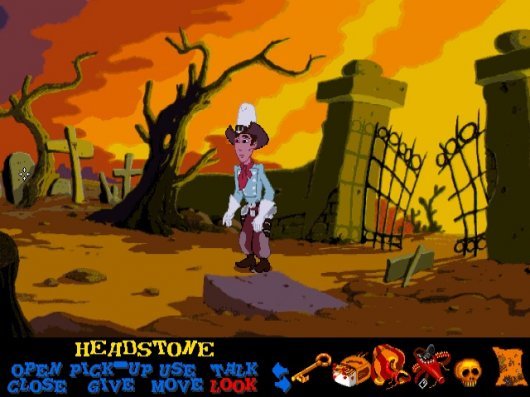 Ah, well. Perhaps the puzzles will send the score for this game rocketing skywards? To be honest, no. Maybe a couple of metres upwards, but certainly not at a rocket-like pace. More of a lazy crawl. The key word here is novice. This is a great game for first time adventure gamers; puzzles range from the easy (pick up a screw, place it in a hole needing a screw) to the moderate in challenge, but they're far from difficult. If you're an experienced gamer I doubt you'll take very long to whirl through the puzzles on offer here and will soon be off looking for more challenging fare. Having said that, the puzzles are varied enough and the game is relatively non linear. Some puzzles require conversation as the means to an end, others the more familiar use-X-with-Y approach. The game has a fair balancing act of both.

3 Skulls Of The Toltecs is not a bad game. Nor is it a great game. It's almost the perfect example of a middle-of-the-road adventure game. A good storyline, hampered by simplistic puzzles that don't often pose a great challenge, buoyed by great-looking cartoon cut-scenes but dragged back down by some pretty standard voice acting and unfunny dialogue. It's an erratic mix of qualities that doesn't come together in any great way. Quite simply; buy it or don't. If you don't, you're not missing out on too much. If you do, then like a meaningless relationship you'll enjoy it why it lasts but forget about it when you part ways. Ah, the tragedy. I'm sure you'll be able to get over it.

How the West was...surprisingly average.

What our readers think of 3 Skulls Of The Toltecs