The premise should be all too familiar to you by now. There's this private eye, name o' Tex Murphy, living as the only norm in a section of San Fran full of post-WW3 mutants. He's down on his luck, scraping together every last dime, living on the edge of poverty every moment, trying to find cases to keep himself afloat. Tex is a ruggedly handsome, very charming and affable, and rather pitiful private eye. But all of a sudden...he's got the case of a lifetime dropped right into his lap. And before you can say "what's new gumshoe," it's up to our hero to save the entire world from certain doom in one form or another.

Say what you will about repetitive formulas...this one works. It worked well even with technological limitations in Mean Streets and Martian Memorandum, it worked to near-perfection in Under a Killing Moon, and now Tex is back for his fourth journey into the vile mutant criminal underworld.

Those smart fellers at Access knew what they were doing. They knew darn well that Under a Killing Moon worked, and it worked well. So, they did what any company with half a brain would do; they just ported the same darn interface and locations over and spent their development time on story and characters. Gasp, what a thought. Spending extra time on story and characters. Bringing back the same general setting brings an element of familiarity that shrinks the learning curve drastically for returning fans, but yet it's obviously a very different game with all kinds of new puzzles. 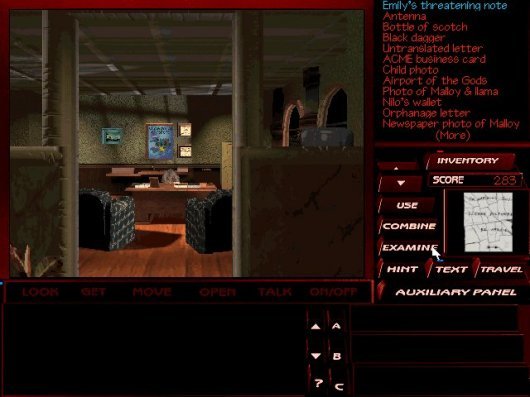 If it feels familiar it is, because you've still got the same office in the same section of downtown San Francisco, with the same eccentric weirdos inhabiting the space around you -- for the most part, at least. There's old Rook in the pawn shop, there's your good friend Louie down at the Brew'n'Stew, and there's Chelsea at the newsstand across the street. Actually, Chelsea will play much more of an intricate role in this story than she did last time around.

But there's plenty of awesome new characters thrown in the mix. Remember that chocolate addict who lived in Rook's dumpster? He's now got a bad wig and a business up in Coit Tower. And you'll have more dealings with Nico, your super-scuzzy landlord, than you'd prefer. But there's no such thing as a Tex Murphy adventure without Detective Mac Malden, your number one source of information and your favorite insult target.

I hate to give away any of the plot because it's so much more fun to play a game without any foreknowledge of what happens, so I'll just say this: the story begins as a man comes into your office and asks you to find a long-lost friend of his. Before long you've got a merciless government organization hunting you down, and you're on the verge of blowing the lid off of a massive government conspiracy involving aliens! And I don't mean mutated humans, I mean real-life extra-terrestrial beings! (And boy are they ugly...) 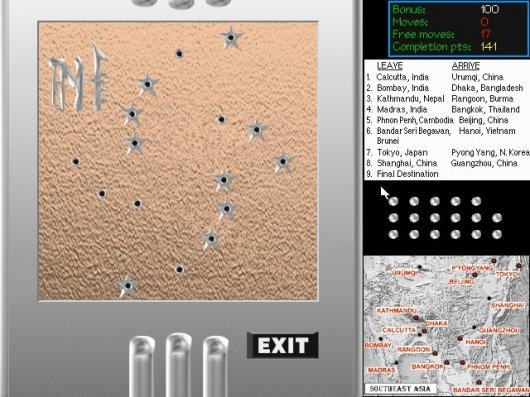 The game contains no less than ten days of puzzles to solve. And unlike the previous Tex game, you will find yourself confronted with a multitude of nasty puzzles this time around. There are oodles of Myst-like puzzles thrown at you, but each one does have a special code that will bypass it, a code that can be obtained simply by pressing the Hint button. Personally, I would have preferred that the Hint button give you a hint to the puzzle rather than just give you a bypass code that costs you a ton of your points. In any case, puzzle fans will be very satisfied, and those who aren't won't find themselves bogged down for too long. This is still the most difficult game of the series, though.

In any case, it's the Tex Murphy trademark: an incredibly intricate and interesting plot that will keep you playing for hours on end.

The human element in this game is unbelievably strong, featuring rock-solid acting all the way down the roster. You will care more about the characters in this story than in any other FMV game because they are just so darn real. It sounds so cheesy, but I felt more of an emotional connection with Tex Murphy than I have with almost any other adventure hero. He's so likable, so tough in the face of awful circumstances...you've just gotta root for him. 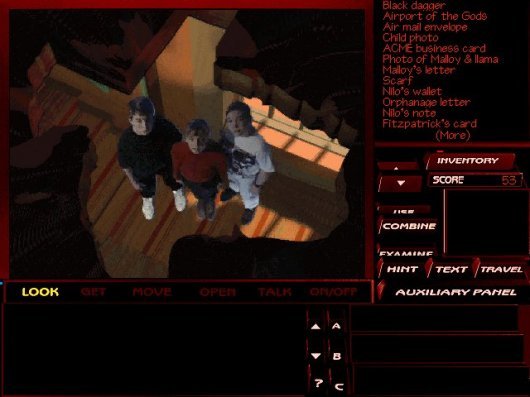 Looking for a sharp new interface? Look elsewhere. The interface, my only complaint about UAKM, hasn't been modified one whit, and at least that means that if you're already used to it you'll be able to jump right in. It can still be clumsy at points, though, and there are more parts of this game that demand you to have expert timing. That's why there's a Save & Restore function, though.

Pandora Directive offers something that most adventure games don't even consider: two different paths to follow. There's a path for those who are just playing to have fun, which gives you much more room for screwing up with the puzzles and even deletes many of the puzzles entirely. Then there's the path for the hardcores. With this path there's no getting around any of the puzzles, and you'll be on a short leash for all of them. You'll be filling up a Zip Drive with saved games after the first ten or eleven deaths in this storyline. It is nice, though, that Access delivered something to appeal more to those hardcore puzzle fans, yet also offered an option for soft wussy puzzle-hating story-lovers like yours truly.

This game doesn't offer any substantial improvements in graphics or sound from Under a Killing Moon, but that game was so far ahead of its time that it really doesn't need to; it's still a beautiful looking and sounding game. It's also longer than any other Tex Murphy adventure, and more challenging. This is truly an extraordinary detective game, toe to toe with Lost Files of Sherlock Holmes as the best of its kind. Though it doesn't offer anything radically original or different from UAKM as far as graphics, sound, or interface go, it still gets the nod over its predecessor because of its challenge level and its even more intricate story. Absolutely every adventure fan must have this game in their lineup.

WHERE CAN I DOWNLOAD Tex Murphy: The Pandora Directive

Tex Murphy: The Pandora Directive is available at:

A brilliant game, one of the true classic adventures, and one of the few detective games deserving to be immortalized.

GAME INFO Tex Murphy: The Pandora Directive is an adventure game by Access released in 1996 for Linux, Mac and PC. It has a Live Action, Photographic style, presented in Full motion video, Realtime 3D and is played in a First-Person perspective.