Adventure games by Too Husky

Myths and fairytales can provide excellent inspiration for all types of media, some more familiar than others. Indie developer Too Husky dipped into lesser-known (around the world) Slavic folk stories to form the backbone of their point-and-click experience Mira. Lusciously depicted but with scant gameplay, it’s more of an illustrated e-book with activity pages than a game, making it more of a primer for the legends themselves than any sort of in-depth exploration of the subject.

Players assume the role of Mira, a human woman taking care of a small group of orphans in a creaky old house in Cracow shortly after World War II. As the adventure begins, Mira mysteriously awakens in a mythical forest. Now, with a bit of an Alice in Wonderland vibe, Mira must start her search for a way back home. In her wanderings, she encounters creatures from local legend such as Bulds (anthropomorphic boulders), Light Ghosts (floating, illuminated orbs), and Bzonec, a small rodent-like critter with a pipe and dapper clothes who becomes Mira’s companion for much of her travels.

As each of these entities are discovered for the first time, or simply name-dropped, they are added to the lexicon, a sort of encyclopedia accessible from the game’s menu that provides a paragraph or two about the legend behind each. A few details, such as Bzonec being a spirit who watches over children, are incorporated into the story itself. However, most of the information can only be read about in the lexicon. 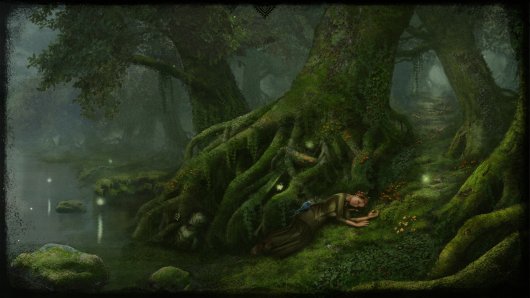 Mira’s journey is somewhat interesting and I enjoyed getting a peek at the various Slavic legends. Characters like the self-absorbed Bzonec, who gets annoyed by the children of the real world having a stuffed toy of him, and the ponderous, stern bison-like Librarian are, by turns, charming, witty, and given distinctive personalities. At least, as well as the English localization allows them to be.

Unfortunately, the translation here is not the greatest. It falls into that category where it’s poor enough to be consistently distracting with every line of dialog, but not so terrible as to be unintentionally funny. Since the gameplay experience consists almost entirely of reading dialog, these start to grate very quickly.

As Mira proceeds through this strange new world, she gets drawn into a plot by a nymph who wants her help in deposing Mokosh – Mother Earth – who was responsible for the death of most of the nymph’s sisters and who, in some magical way, keeps both the fairytale world of Navia and the real world of Javia connected and in harmony. Ultimately when Mira encounters Mokosh, a choice is provided on how to face her. In fact, Mira has several decision points throughout, though none of them amount to anything other than a few altered lines of dialog immediately afterward, including the Mokosh one. Even when you must pick between sacrificing an ally or an enemy agent from World War II (who has similarly been transported between worlds) to a beast that feeds on the pain and suffering of others, no consequences result and Mira is simply allowed to go on her way. 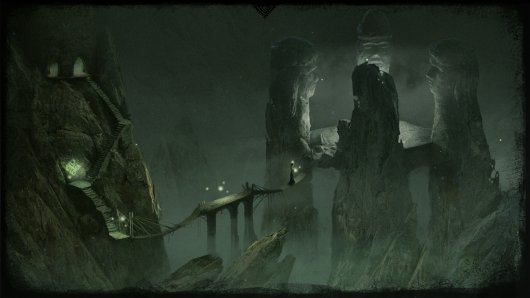 Mostly, however, this production suffers from a lack of any meaningful interactivity. Much of the gameplay consists of clicking through linear, non-voiced dialog (save the odd choice or two) or else clicking a single hotspot on the screen to proceed. And when I say a single hotspot, I literally mean there is only one hotspot somewhere on the screen. Player involvement here is nothing more than mousing around the screen until the hotspot lights up and then clicking on it. Actually, that’s not true. Usually you have to wait a short period of time after a scene is displayed before the hotspot itself becomes active. Multiple times I found myself scanning the screen with the mouse with nothing lighting up, only to revisit a spot I’d already gone over and suddenly have the interact icon display.

To be fair, there are also eight puzzles spread throughout the 90-minute play time of the game. Although given how much like a storybook the experience is, “activity pages” might be a better description as puzzles implies they can be reasoned through logically. These segments usually switch to a close-up view of a painting, book, or mechanical contraption hewn into the rock of the world. While a couple of them involve swapping or rotating mismatched pieces to make a recognizable pattern, the rest mainly consist of clicking symbols at random to discover the correct order: click the next appropriate glyph in the sequence and it lights up. Get it wrong and anything that’s lit already dims again and you have to start over. A couple other instances are more hidden object-esque, requiring three or four symbols secreted in the scene to be found in any order to be able to proceed.

Easily the best aspect of Mira is its visuals. Every location you traverse is beautifully hand-painted and highly detailed. Unlike a typical point-and-click adventure, where the protagonist can walk around freely within a scene, Mira is usually limited to only one or two spots per room. She occasionally demonstrates a gentle breathing motion, as do any other characters present, but other than that animation is generally limited to the odd wandering Light Ghost, floating bit of dust, or the pervasive film grain effect that has been applied over each scene. 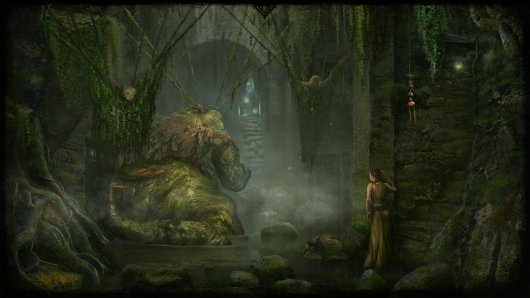 Each individual screen is akin to one page in an illustrated fairytale book. Once Mira leaves one scene, she almost never returns to it. This lends a bit of a “road trip” feeling to the whole affair, and a sense of progress being made as there is no going back, only forward. Most scenes are typical medieval fantasy forest fare, filled with massive moss-covered trees or vine-strewn ancient architecture. However, a few locales really stand out, such as the great library with its cathedral-like walls, mounds of books, and shafts of light streaming in from above that give it a true sense of antiquity. Or the giant Oak, which towers over Mira and has glimpses of real-world buildings poking through the moody fog behind it. But even those areas that are not especially distinct are still beautiful to look at.

On the audio front, Mira is an eclectic mix. There are no voices and only the occasional effect, but a soundscape is always pervasive. Sometimes it’s eerie and ominous music. Other times it’s whispering voices accompanied by the beating of a single drum. Occasionally animal cries have been arranged almost like instrumental pieces. It all helps to create an atmosphere that suggests the world of Navia is not a safe place to wander through (even though death is never something you need to worry about).

Mira is an odd digital experience. With its near constant stream of mostly linear dialog and lack of any substantive gameplay, it’s much more akin to an illustrated e-book with a few activity pages than a game. As such, its marvelous painted landscapes and hints at the rich and interesting Slavic folklore inspiring it did capture my attention. At the end of the day, though, a poor translation hinders its narrative effectiveness, and sadly there’s just not much here of substance by which to recommend the experience.

More illustrated e-book than game, Mira is a trip through beautifully painted Slavic myths and legends that’s let down by a lack of gameplay and poor localization.

GAME INFO Mira is an adventure game by Too Husky released in 2020 for PC. It has a Illustrated realism style, presented in 2D or 2.5D and is played in a Third-Person perspective.