Playing AMATA’s new VR thriller Last Labyrinth is highly reminiscent of Jitenshasougyou’s Tale of the Fragmented Star, for better or worse, though much more the latter than the former. Released almost a year earlier to the day, its predecessor was a similar escape-room scenario that took away your ability to interact with the environment, instead forcing you to rely on a young female companion, passing along commands to her solely by looking at objects. It was such a frustrating and mind-numbing experience that it ought to have served as a template for how not to design a hands-off first-person mystery. While the setting is vastly different, Last Labyrinth seems in many ways to be a carbon copy, emulating the passive control gimmick so closely that I honestly thought at first that this was a sequel created by the same developer. Though it deserves slight credit for including a few inventive and entertaining puzzles, the actual gameplay framework built around them is far from recommendable.

There’s no preamble to speak of when it comes to narrative set-up here. The game fades in from black but shows only a single lamp standing in front of you, surrounded by a sea of darkness. A hand reaches into the halo of light it casts and pulls the cord, illuminating a small barren room with nothing in it but the lamp, yourself, and the owner of the hand, a young girl. As you immediately find out, you have no way of moving – not even your arms, unusual for a VR game – and looking down reveals that the reason for this is that you’re confined to a wheelchair, with your hands shackled in your lap.

You similarly cannot speak, but it wouldn’t do you any good since your companion can only communicate in an unintelligible language. Your only means of controlling the action comes from a button in your cuffed hands, which activates a beam of light strapped to your forehead. Thus, it is possible to direct the girl to pick up, move, and otherwise interact with objects by turning your head towards them and activating your light beam. And that’s all you’re able to do for the remainder of the game. 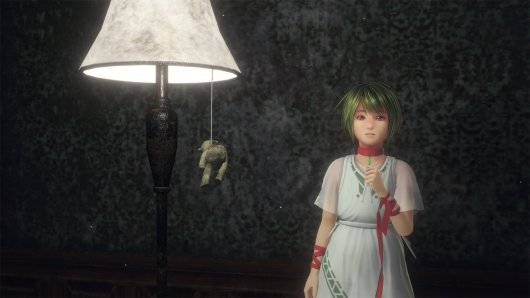 There isn’t much more to the story, not that the bare-bones premise is much of a problem, at least in the beginning. It turns out you’re in an enormous old, abandoned house filled with a series of puzzle- and-trap-filled rooms that lead either to escape or death. Some rooms offer a choice of doorways through which to proceed, each one leading to new puzzle rooms and, at the path’s end, a unique end scene. Along the way, questions about where you are, who put you here, and for what reason actually play into the mystery thriller aspect. At certain times your apparent captor – a heavily breathing but otherwise absolutely silent masked man – even makes an appearance, and it’s engaging enough to try to figure out who’s behind the mask and what’s really going on here.

Sadly, Last Labyrinth refuses to ever answer any of these questions in a meaningful way, and I highly suspect there are no answers here to even be found. Even the numerous “endings” don’t offer any satisfying nuggets of information, just more indiscernible or downright nonsensical cinematic snippets before reloading to try a different path through the house for more. During one such finale, you awaken in a hospital room and look in a mirror to find you’re the masked villain. In another, the same sequence repeats except this time the face reflected back at you is that of your young female companion. These are just two examples, and each scene fades to black and the credits roll yet again. After solving all puzzle rooms, after viewing end scene after end scene, I still don’t even know the first thing about the story being told here, and that’s no exaggeration.

Getting to these different outcomes is about as ponderous and torturous as could possibly be, from a design standpoint. In this regard, the game is a true test of one’s patience. The chief offender here is your companion’s deliberate pace before your requested actions are carried out. Pulling a lever or pushing a button requires waiting for her to walk over to it, examine it, then often turn back to you to seek confirmation – delivered or refused by vigorously nodding or shaking your head – that this is really what you wanted her to do. And that’s just the work-up to actually performing the action. Due to the girl’s lack of body strength, performing certain tasks takes extra effort, which translates into additional time. Be prepared for lots of this, as some puzzles require pushing entire sequences of buttons over and over, or pulling levers one after another, all having to be input by you and carried out by her one…at…a…time. 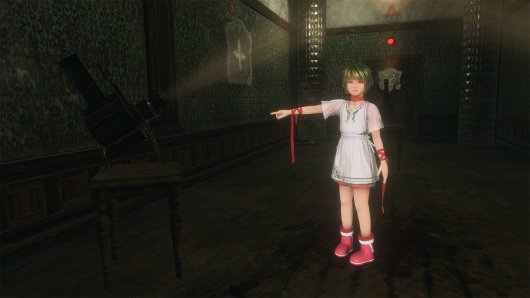 There are plenty of repetitious animations that can’t be skipped as well. After completing any puzzle, the door to the next room will open. Before you’re able to proceed and get back to puzzle-solving, however, you have to sit through your companion wandering over to the door, peering through the opening, laboriously pushing it open, and returning back to you before finally propelling you to the next room.

There’s even repetition within the puzzles, if you’re unlucky and forced to restart a previously cleared path by accident, or if you want to truly view every single last ending. The worst time sink here is a challenge that actually has you playing a board game against the computer. The game in question is Dobutsu Shogi – a kind of Japanese variant on chess designed for children – which you have to play for multiple rounds in order to trigger an end scene, with different scenes awarded for winning or losing. While this could have been a fun diversion if it had popped up just once within the game, it is a mandatory fixture along several paths through the house and cannot be bypassed even if already completed once.

Last Labyrinth’s one saving grace, thankfully, are its other puzzles, which do exhibit some creativity and entertainment value in both their variety and challenge. Almost every room hosts exactly one puzzle, and there are plenty of different objectives to master here. In fact, it’s kind of an exciting moment when you enter a new room for the first time and have to work out what it’s asking of you, then how to accomplish that goal. One room may ask you to manipulate the tracks on a model train set to lead several trains to their respective stations, while another will have you memorize and repeat color patterns or work out the weights of objects to make a scale balance. 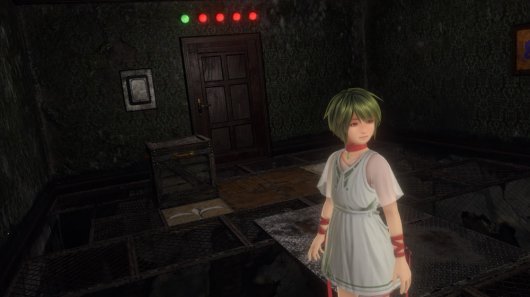 The one exception to the single-puzzle rule is a particular location that serves as a bona fide escape room, with several smaller challenges interlocked to open the door leading out. As engaging as some of the single-puzzle rooms are, I do wish there were more of these actual multilayered scenarios. Meanwhile, your companion, who’s there to do your leg work, can become yet another obstacle to patiently deal with: more than once she ended up standing right in front of important clues I needed to see, blocking them from me until she decided to move.

Equally entertaining as the puzzles themselves, as well as delightfully macabre, are the consequences for failing to solve one correctly. The punishment is death, for both you and your companion, carried out in unique and sometimes outlandish ways. I have to admit that having my head locked into a guillotine and watching as the blade dropped towards me is a sensation I’ve honestly not experienced before in VR. It’s worth messing up each puzzle the first time you encounter it just to see all the deaths, particularly since you can immediately restart in the same room from a menu. 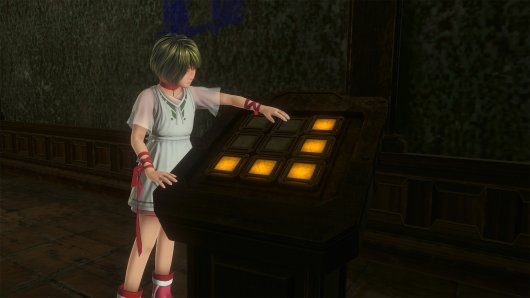 Apart from the decapitations, immolations, and pulverizations (to name a few of the more mundane deaths) there’s nothing particularly noteworthy to look at or listen to along the way. The graphics are serviceably realistic, and about as dark and dingy as you might expect, and there’s not much in the way of music, instead making way for the creaking of floor boards and, once traps are activated, the whir of machinery and slicing of blades.

Last Labyrinth almost reaches the point where it could have been worth a look for puzzle nuts, as the challenges are mostly interesting and fun to figure out, and seeing everything on offer can push playtime from three or so hours for the first handful of rooms to around six or seven hours if you want to see more endings at the expense of having to solve some puzzle rooms repeatedly. But there’s not much meat on this game’s bone, with all semblance of narrative sadly wasted in attempts to be much more cryptic than it has any right to be. Worse yet, while the mental part of working out puzzle solutions is enjoyable, the detached physical act of solving them by proxy is pure anguish, miserably slow and tedious. In the end, even the lure of a handful of interesting brainteasers and some morbid death traps aren’t enough to keep interest in this game alive.

The puzzles make an effort to redeem Last Labyrinth, but with its already unsatisfying narrative stretched even thinner by tedious pacing and unnecessary repetition, it’s best to avoid the trap of playing this one.

GAME INFO Last Labyrinth is an adventure game by AMATA released in 2019 for HTC Vive, Oculus Rift, PlayStation VR, Valve Index and Windows Mixed Reality. It has a Illustrated realism style, presented in Realtime 3D and is played in a First-Person perspective.