A Look at Graphics: Shaping Perceptions

I've written at some length about the way artists can use light and colour to tell their stories, and to construct a sense of atmosphere and a particular mood, whether from a particular object or from an entire scene. It's one of the most effective visual elements to keep in mind when designing scenery but it's not the only way to create mood, or to be suggestive of ideas. In fact, artists have a range of tools available to work with. The “form” – or shape – of an image can be powerful, memorable and evocative, as we looked at earlier when examining character designs in silhouette. In scenery it's also powerful, beyond merely being descriptive of the objects represented. Though it's easy to think of the shape of something as a noun (as in “this is a couch”), the artist's approach to creating that form can also make it an adjective (as in “this is an expensive couch”). 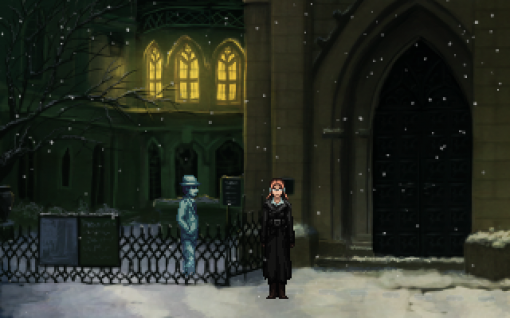 (Click on any image for a complete gallery of larger versions)

Something as simple as a door, for example, can convey information to the player. The door here, from The Blackwell Epiphany, is quite obviously a church door. The shape, coupled with the architecture that frames it, is of a type that's familiar enough to give a clear sense of where this door will lead. It wasn't feasible for us to show the whole church in this scene, but because this form is so recognisable, a doorway sufficed. 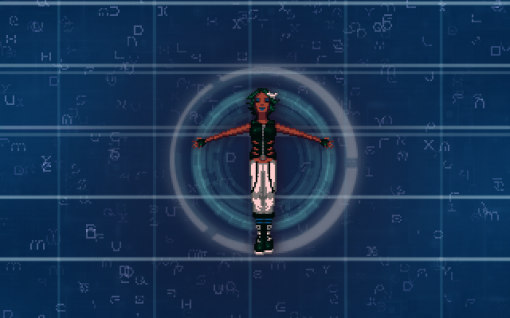 Coming back, yet again, to this opening shot from Technobabylon, we see very simple forms. The circles surrounding the character suggest an artificial 'perfection' one doesn't commonly find in organic forms, with noticeably squarish chunks taken out, reminiscent of pixels and disk sectors. The shape the character cuts in the middle was based loosely on the famous 'Vitruvian Man' image that describes ideal proportions of a human figure – a perfect visual counterpoint to narration that describes the perfection of self one can achieve when assuming a digital identity. 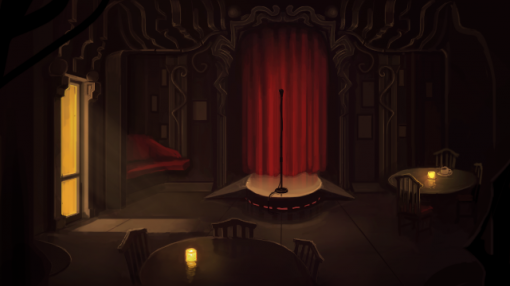 On the other hand, this scene from Unavowed is host to a quirky, creative character with a flair for the unusual. I tried to make the architecture here suggestive of this – irregular patterns, over-embellishment and a general looseness of shape design in the scene were ways for me to try to complement the subject matter of this location. 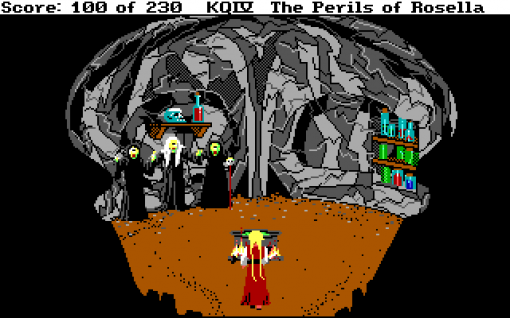 One of my favourite early examples of an artist using the shape of things in a scene to reinforce the mood is this cave from King's Quest IV, which has clearly been designed in the shape of a skull, complete with alcoves for the eye sockets. It's a dangerous, spooky moment in the game, with intense gameplay, and having the scene constructed from an iconic form like this is a great way to embellish that, even with the limited technology Sierra was using at the time. 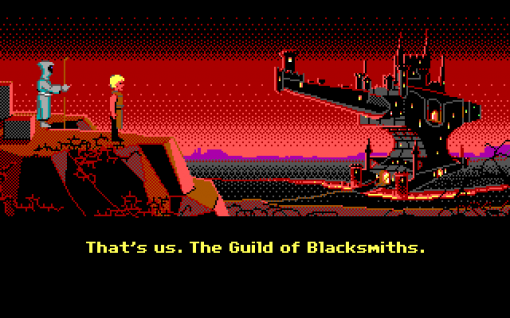 Another great example is this shot from Loom, a scene I come back to again and again. 'Never would have guessed' replies Bobbin to Rusty's comment about the nature of their guild, a nod to the bold anvil shaped structure that serves as their headquarters. Not only is this informative, it's also memorable and iconic; a massive building that takes the shape of an anvil isn't something easily forgotten. Much like with the character designs in silhouettes, this is a building I'd recognize from its outline alone. 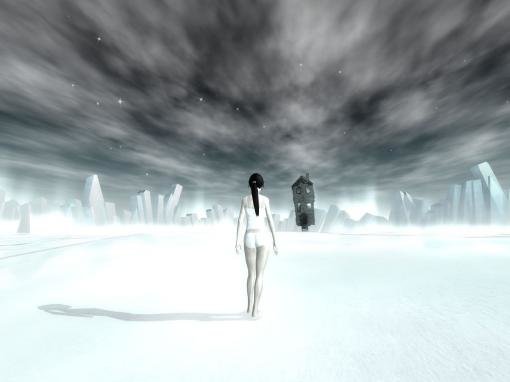 Having such a bold shape that stands out in the distance is very powerful – notice here how obvious this building from Dreamfall seems, both from its colour and its uneven, wonky shape among the straight, clean ice crystal around it. Such a shape tells us, even from so far away, that something is wrong here, that things aren't as they should be. It's a testament to the power of carefully designed structures that we can 'read' a building from these kinds of distances, and it's not inaccurate to say that they have character and a feeling about them. In this way, an artist can tell us a wealth of information about a building before we ever set foot inside. 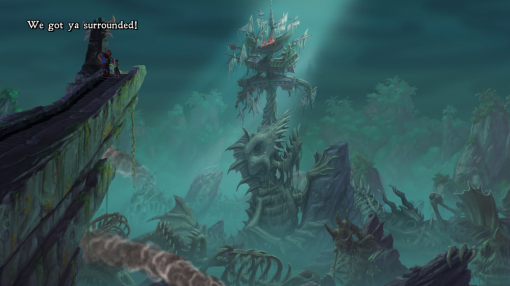 Whereas the last scene contrasts the main structure with the rest of the surroundings to make its form more powerful, this scene from Duke Grabowski uses the surroundings to reinforce the idea, and we see a great use of repetition of an idea. The assorted massive skeletons, replete with fangs, horns and talons, are a clear hint: this is not a safe place. Without knowing any story, without hearing the ominous music, or being warned away from this place by a character in the game, one look and the figures here tell us what this scene is about, and how we should feel as a result. 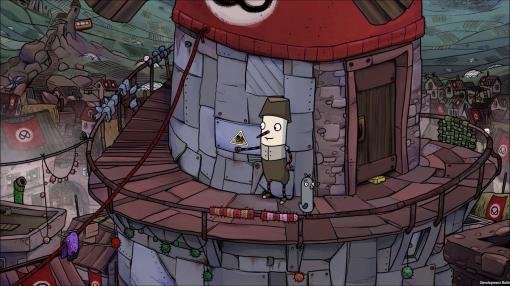 Another great use of repetition is evident here in this shot from The Inner World: The Last Wind Monk. Littered about the backdrop are the repeated symbols of the 'Conroyalists', an unfriendly group that has us on the run, and having their logo repeated so often helps to reinforce the danger we're in. Symbols and logos are great because they allow decorating anything with a shape whose meaning is instantly apparent if we know the context. In this way, the shape seen so many times throughout this image is not as instantly evocative as some of the others, but it's still a clear example of the power of a specific design in art. 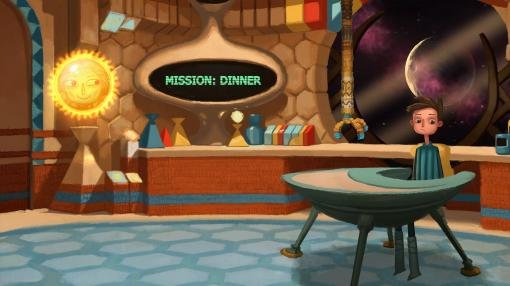 Another fun example of a repeating form is visible in this scene from Broken Age, where the walls and floors of the spaceship are decorated in hexagons. These are a fun shape – they suggest technology, a love of geometry, and even the confining walls of a beehive. Done in pastel colours, and complemented with the bright, geometric kitchen decor that is redolent of children's building blocks, the designs here take the various aspects of the setting and combine them in a lovely way. 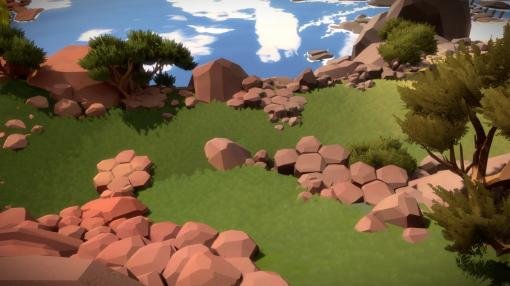 Hexagons are also used in The Witness, a game with a bountiful supply of symbolic shapes. Beyond the many fun examples one can find in the environmental decorations, the very stones of this world are often presented in geometric shapes most likely inspired by the famous Giant's Causeway of Ireland. Here, though, they suggest the hand of a designer, a sense of patterns in nature, and the pervasion of geometry, all very appropriate in this game.

The appreciation of the power of shape and design like this is very empowering. Too often one's first sketch of a chair will be just a chair, a door just a door. By employing design skills, by knowing the context of the scene being drawn, and by observing the relevance and significance of particular shapes throughout popular culture and history, an artist can elevate the impact of their work, and therein further engage their audience. Visual language is, like all languages, a means of communicating ideas, and as the elegant cursive or furious scrawl of a note can convey the mood of the writer, the very shape(s) of our world can tell our players volumes. 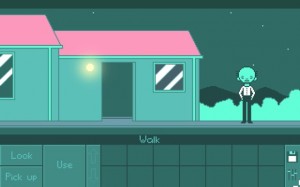