Review for Empathy: Path of Whispers

The world has gone crazy. Wars and riots are everywhere. Billions are now dead. You are a child whose family has apparently disappeared, victims of the widespread violence. You are asked to go on a quest by a gentle-voiced stranger who says that, together, you might be able to set things right. You then find yourself in a laboratory. Picking up a scanning device, you look down at a console and are told to push a button. Really? That’s all it takes to save humanity? Alarms go off, your companion says “no, no, no!” and a white mist forms before your eyes. It seems that saving the world is going to be a wee bit more complicated than pushing a button after all. In the eerie dystopia of Empathy: Path of Whispers, you will need to explore and re-examine shadowy rooms and tunnels, locate objects that replay other people’s memories, start machinery and access secrets in a complex, exasperating yet ultimately rewarding quest to right mankind’s latest wrongs.

Your journey begins in Chernosk, an abandoned wreck of a city with crumbling apartments tottering on stilts. Your first goal: getting into Atlas Park, a leafy sanctuary perched atop the shoulders of an immense statue. By the time the game’s fifth act ends, you will have visited a cavernous train station, a pagoda-inspired cliffside village, and a high-tech science institute. The environments are naturalistic but surreal and include jaw-dropping 3D landscapes. Though close-up textures can be pixelated and the foliage rather abstract, this dovetails with the overall dream-like atmosphere. There’s a flashlight feature that allows you extra light, and later landscapes are shown during bright daytime hours, but the interiors and underground areas (which make up the bulk of exploration) and Atlas Park itself (which is a nighttime setting) are relentlessly gloomy.

Though each location has a different architectural emphasis, the interiors within each act are much alike. The same elements recur, though arranged slightly differently, comprising the likes of identical doors, balconies, stairs, lockers, windows, and sinks. Signs of wreckage are everywhere: discarded garbage and papers, broken furniture, mold, dirt, and tarnished metal. There’s also a scattering of individualized objects. It’s surprising how just a toothbrush, for instance, can evoke a sense of civilization. Still, in each location, the interiors are mazelike simply because they are so repetitive. 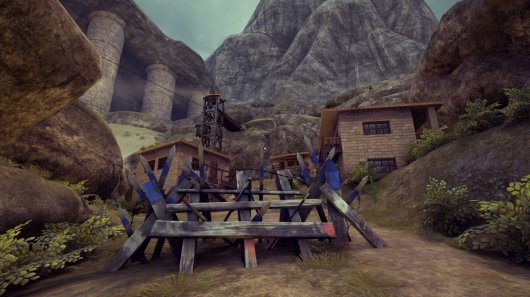 But what really bring these ghostly places to life are the objects that spark memories from a large cast of notable characters. Mementos that are currently interactive shimmer to attract your attention. Some are easily found; others require searching corners or shrubbery, climbing staircases and ladders, and figuring out how to open locked doors. Locating and clicking on items to hear the former residents talk to one another (or think to themselves) takes up the vast portion of gameplay. Piecing the plot together is the game’s greatest challenge.

At first, the memories seemed almost random to me. For a while I despaired of ever being able to figure out what had happened in Chernosk and beyond. (It’s helpful to enable subtitles so the characters are identified, which makes the task significantly easier). By the time I made it out of Atlas Park, however, I was truly caught up in Empathy’s story and eager to know more about each person’s past and ultimate fate. 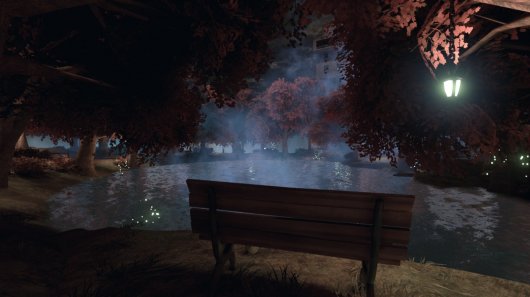 The writing and excellent multi-accented voice-overs combine to give a wonderful sense of the main characters’ motivations and personalities – which is important, as you never see their faces. Grigori, for instance, is gruff and mentions facts, not feelings, never hesitating to take responsibility for devastating decisions. Chana has a flair for the dramatic and steeps herself in outrage. She aims for perfection – or, at least, what seems perfectly fair to her. Mrs. Savinsek plays the long game cleverly and ruthlessly. Andropov asks lots of questions and re-examines his assumptions. He sees human failings, but that doesn’t discourage him. He wouldn’t describe himself as a hero, but he is one.

Although the narrator is never identified by name, it becomes clear that he has visited many of these places before and very little of what happens seems to surprise him. His comments help provide context for people’s actions, and he frequently uses lively analogies. His comments range from wry and chuckle-worthy to heartfelt and sad. “Welcome to Depression Scenic Tours. If you look to your right, you can see the end of society. On your left, more of the same. Please keep your belongings close and try not to get murdered. If you see something, say something.”

As the intricate, ambitious tale unfolds, you’ll encounter evidence of innocence, cruelty, and ambiguity, as well as how cooperation (or lack of it) both succeeded and failed in the face of adversity. Questions are raised that seldom trouble the shallow surface of the typical video game. What does it mean to be human? To be humane? What is the “greater good” and who decides it? Is courage admirable only when it succeeds? Is the willingness to manipulate others for the sake of power sometimes excusable? 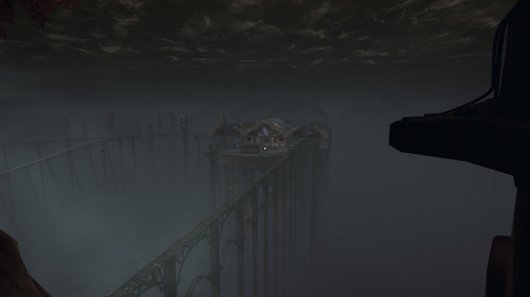 With its emphasis on narrative, Empathy’s puzzle-solving leans mostly to the easy side. It contains inventory obstacles where the object required is usually obvious. You’ll also encounter self-contained logic challenges, including mapping electrical connections, fixing a marker on a specific path, and setting controls where clicking a dial also rotates the neighboring dial. At key flashback junctures, the screen suddenly changes color and the world becomes misty. When this happens, you must move nearby equipment to fix a bridge or build a tollbooth or repair a train. Then, when you’ve placed everything in its correct spot or sequence, the world returns to normal (sometimes after a brief cutscene) and you can progress in a way that wasn’t possible before.

The game also contains a wavelength sequencing puzzle that’s triggered every time you locate an important memento. Here you synchronize red and white wavy lines on the E-15P Energy Scanner. It’s tricky at first, but goes quite quickly once you figure out the controls, though a recent patch allows you to skip the wavelength conundrums if you start to find them tiresome. 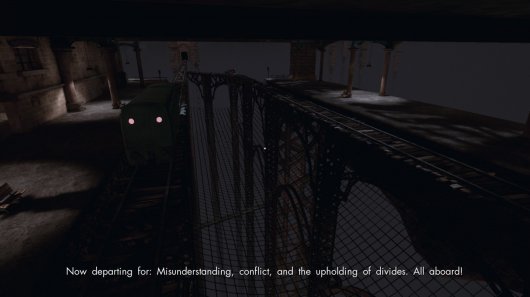 Far more tiresome to me was simply locating all the mementos, because many aren’t interactive until later points in the story. I did a ton of back-and-forthing. The device used for the wavelength puzzles also scans for mementos. Unfortunately, you are given no details as to how it works. Walking while pressing the right mouse button to hold up the scanner triggers all kinds of weird stuff. Small triangles on the device move around the circular face. Blobs of light and white shapes show up briefly and then disappear. Colored outlines, some recognizable, some not, whisk across the dial. If you walk in the direction of one of the outlines, occasionally you will locate a memento. But usually you come to an abrupt fall over a cliff edge, or run into a tree, or bump into a building. At other times, you may find an interactive memento on the ground right under your feet and the scanner doesn’t recognize it at all.

For me, the biggest hurdle was figuring out that this device only identifies “essential” mementos and not “optional” mementos. The presence of the latter led me to the conclusion (until about ten hours into the game) that the scanner was simply unreliable. Holding it takes up part of the screen, so carrying it around means that you are more likely to miss the many items it’s not tuned to. And though it gives you the general direction of essential mementos, it doesn’t tell you where the item is located vertically. Since the game is full of rooms stacked on top of one another, multi-level plateaus, and other areas up and down ladders and elevators, vertical barriers are a huge factor.

When I finally grasped the E-15P Energy Scanner’s abilities and constraints, exploration became less frustrating. Still, with each new act, I recommend initially exploring without the device. It’s easier to enjoy the locales when it isn’t blocking your view, and certain items are actually simpler to find without it. Then, when you’re comfortable with the new environment and have seen pretty much everything, it’s time to pull out the scanner and try to find the mementos that weren’t obvious the first time through. 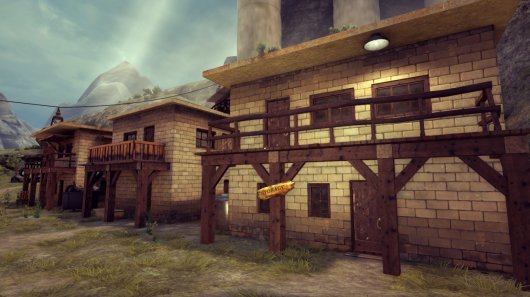 Empathy plays from a first-person perspective using the WASD keys and the mouse. You can run by holding down the “shift” key and click to pick up glowing inventory items or access mementos. The game has an ever-present cursor, affixed to the center of the screen, that you can eliminate if you choose – though I imagine this would make it more difficult to click on various items (and some hotspots are very small). It’s easy to slip and fall off various cliffs or platforms, but you are immediately restored to the spot you fell or jumped from. Moving about the gameworld is smooth, though the half-pace staircases are so narrow that it’s often awkward to maneuver up or down.

Checkpoint saves are supplemented by an easy manual save system. The “J” key thankfully allows you to read transcripts of all the dialogs you’ve triggered and documents you’ve already viewed in-game (except for those of the narrator). Strangely, though the first two acts performed well on my computer, movement in the third act was slow as molasses. At that point I had to power down the graphics settings from “ultra” to “low” in order to explore with ease. Regardless of your settings, there’s a long loading screen when you start or continue the game from the main menu.

Empathy is an ambitious way to tell an interwoven tale, and for the most part the writers have nailed it even as the game design does not. I was entranced by its story – all the way through the remarks after the credit sequence, in fact – but I spent a large chunk of my 17 hours wandering around in gloomy darkness. Though most of the puzzles are easy, scanning the environs for mementos with that craven trickster – the E-15P gizmo – is anything but. Providing a complete tutorial for this quirky device should have been a no-brainer, but even then its use would still feel largely unintuitive. The frustrations are ultimately worth it, however, for those gamers who relish cogent character portrayals and a narrative that sticks with you as the clues gradually drop into place, bringing provocative revelations. Many may not be willing to wait out such a slow burn in the dark, but if you’re patient enough to see it though, then come join we few, we happy few, we band of sisters and brothers who can take on the challenge of Empathy: Path of Whispers and persevere until the end.

If you cherish piecing together clever, dramatic plot fragments and don’t mind lots of backtracking while rummaging through dimly-lit locales, then you owe it to yourself to play Empathy: Path of Whispers.

GAME INFO Empathy: Path of Whispers is an adventure game by Pixel Night released in 2017 for Mac, PC, PlayStation 4 and Xbox One. It has a Illustrated realism style, presented in Realtime 3D and is played in a First-Person perspective.