Review for The Beard in the Mirror

Everything old is new again, as they say, and as technology improves at exponential levels, it’s only natural that those who remember the way things used to be in previous centuries find themselves inclined to turn to experiences that offer that comfortable familiarity of the past. The Beard in the Mirror is a game squarely designed to look and play just like an adventure from 25 years ago, by a small team called Oh, a Rock! Studios composed of those who remember what it was like to play the classics. However, while the game certainly elicits a sense of nostalgia and shows the promise of a solid story mixing fantasy and sci-fi elements, it fails to impress visually and ultimately does little to stand out as a memorable adventure in its own right.

If the idea of looking at your facial hair reflecting back at you doesn’t necessarily sound like the conceptual framework for a fantasy adventure, you’re correct: this story’s roots are decidedly in our modern society. You play as Paul, a 20-something millennial drifting through a directionless life in his small, drab, sparsely decorated apartment. During another restless night’s sleep, he is suddenly approached in his dreams by a beautiful blonde girl at his bedside, who is desperately pleading to understand why he doesn’t remember who she is. After shaking off the cobwebs in the morning, Paul goes back to life as normal…except his bedroom door, which used to lead to a hallway, now leads outdoors to a faraway realm. Just a few steps into that realm, a sword-wielding adversary attempts to end your journey until Lily, your blonde dream girl, steps in to save your life and send you on further adventures.

Without spoiling too much (including where the game’s title fits in), the story slowly develops as you wander the land, gathering inventory items, meeting unique creatures—human and otherwise—and eventually making your way inside of the realm’s castle, where you discover your relationship to the beautiful Lily and what role you’re really playing in the tale. You would never guess it from the simplicity of the first hour, but once some key reveals occur, the story becomes surprisingly deep and complex in the second half and even contains a couple moments of branching decision. Successfully avoiding major fantasy clichés for the most part, it is an interesting blending of a traditional good-versus-evil fantasy story with some twisty classic sci-fi concepts that introduce different temporal dimensions that are crucial for fulfilling your destiny as a hero. 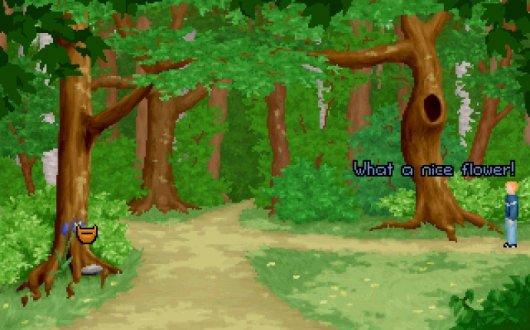 This is a game full of characters: other than the protagonist Paul and Lily, who moves in and out of the story in a creative way, there are many other humans populating this world, but also some fantastical creatures, such as a talking vine that serves as a temporary companion, and a large ogre who has the tools and the irritability to chop your head clean off. Yes, death in this game is frequently possible, though you’re always taken back to immediately before your fatal decision. The game aspires to be charming and humorous, but plays it so safe and nice with the comedy that it is very rarely actually funny; most often your reaction to the writing will be a polite smile, less frequently an eye-roll at a joke that falls very flat, hardly ever an actual laugh out loud. When events get serious and the dialogue turns toward the dramatic, the writing is better, though sometimes poorly edited with a little too much exposition and back-and-forth redundancy between characters in key conversations.

The game’s primary appeal is that of a vintage retro adventure, and as such the interface is a direct lift from golden age Sierra VGA games. Right-clicking the mouse cycles you through icons for walk, look, use, talk, and active inventory item, which can be changed by moving the mouse to the top of the screen. Each of the interface icons contains a small corner arrow which turns from black to yellow to indicate when you are over something that can be interacted with. It is generally easy enough to find the necessary hotspots to move forward, thankfully since there is no highlighter to indicate all items that can be interacted with at any given time.

The puzzles are heavily of the inventory gathering and combination variety; it won’t take but an hour before you find yourself with 20+ items and become so overwhelmed that you just start clicking things on other things in the inventory—and it works more often than you’d expect. In fact, the puzzles frequently have solutions that may leave you a bit perplexed as to how exactly you would have thought of them. 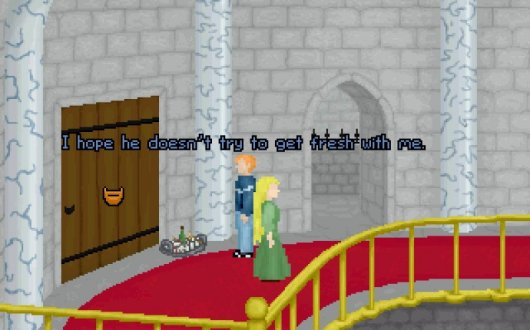 The developers were clearly so proud of the frequency and difficulty of the puzzles that they decided to modernize an old concept: the hint line. As someone who also grew up with the genre 25 years ago, I called the hint line for more than one major adventure at the time, and while the era of social networking seems to frown on actual human vocal exchanges these days, the hint line of 2017 has been recast—as a Twitter account. Yes, if you send a Twitter DM to @beardhints, you’ll receive a personally written and carefully obtuse hint for your problem. No spoilers or lazy walkthroughs here; the responses on the Twitter hint line are light sprinklings of just enough information to get you thinking in the right direction—until the next strange puzzle comes along. Part of me would like to gripe about the lack of logic behind certain puzzles (truthfully, I still don’t understand the solution that allowed me to cross the river guarded by the ogre) but the 1990s kid in me adores the idea of a modern hint line, even if it’s likely to be as limited in life as the now-deserted 1-800 numbers in the back of your Sierra manuals.

While The Beard in the Mirror’s extremely small team (development was almost entirely a husband and wife effort) lends itself to clever ideas like the hint line, unfortunately it also seems to have resulted in less focus on the technical aspects. Visually, the game is simply not up to a commercial standard. Wadjet Eye, Infamous Adventures, and many other indie studios have set a high bar for 320x200 background art and this game looks significantly more dated. Perhaps that’s a deliberate design decision, harkening back to an even older era of blockier graphics, but that doesn’t make the game any easier on the eyes. Some outdoor scenery is detailed and colorful—I like the shading and color of the trees and  surrounding bushes—but many of the interior backgrounds are bland and frequently have perspective issues, where objects intended to be farther in the background are oddly positioned. Most importantly, the main character doesn’t look right at all, with his oversized chest and large brown square for a mouth and awkward walking animation. The lack of visual detail can even cause problems with puzzles at times, when either inventory items or backgrounds (or both) don’t quite have the detail necessary to understand what’s happening. 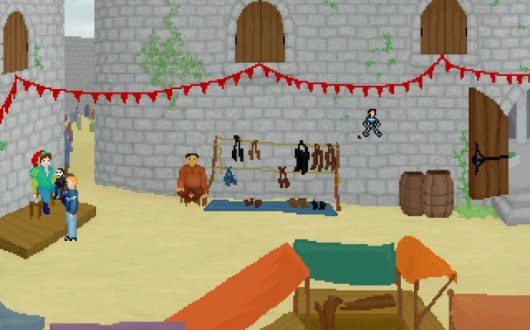 The music features a number of short, pleasant MIDI-style synth themes that are sometimes quiet and contemplative and sometimes bouncy and upbeat but are usually repeated to the point that they can become a bit annoying, though I like the fact that there is at least a constant soundtrack. I’m also willing to forgive the lack of voice acting; I’ve always believed it’s better for a game like this to leave voices to the player’s imagination rather than bring in distractingly poor budget acting, if those are the only options.

Ultimately, The Beard in the Mirror is an enjoyable enough game, with a pretty good story, competent writing, and a decent five-plus hour playtime. However, that can be said about a number of AGS-developed games that are released as freeware, and unfortunately there’s a price point issue here when the game costs more than other amateur-commercial adventures with significantly higher levels of visual professionalism and sharper writing. The experience is ultimately a pleasant distraction and it's definitely a passable game for a small indie studio, but beyond its noteworthy story it falls short of being a true must-play, even for those who can’t get enough of games that look like the ones they remember from so long ago.

Beyond its strong story it doesn’t excel at any particular elements, but The Beard in the Mirror is a pleasant little retro adventure, which a fan of such things will certainly enjoy playing.

GAME INFO The Beard in the Mirror is an adventure game by Oh, a Rock! Studios released in 2016 for PC. It has a Stylized art style, presented in 2D or 2.5D and is played in a Third-Person perspective.

What our readers think of The Beard in the Mirror