Within the first five minutes of Mango Protocol's flawed but occasionally enjoyable point-and-click adventure game Agatha Knife, the titular character – a precocious seven-year-old who loves hanging out with animals before cutting them into bite-sized pieces – begins poking giant holes in the basic concept of religion. In fact, taking very pointed jabs at faith, in general, is a central theme sprinkled liberally throughout the course of experience. While I had no trouble with the game's content, it's definitely not something designed with the easily offended in mind. If you're the type of person who feels particularly sensitive about edgy humor, then chances are Agatha Knife has something to ruffle your feathers. Mango Protocol, it seems, has no trouble waving its flag as an equal opportunity offender.

Agatha Knife and her mother have a serious problem: Their butcher shop, which also serves as their home, has trouble making ends meet (pun intended). If things don't start picking up soon, there's a very strong possibility they will have no choice but to close up shop for good. Agatha, who thoroughly enjoys spending time with the animals before gleefully eviscerating them, is understandably distraught. Not only will she lose her beloved animals and the savory meat they provide, but she and her mother will also need to find other means of gainful employment. In a desperate search for hope and answers, mother and daughter pay an impromptu visit to a local church to pray to the Time Lord (and his precious cheese) for help.

As our heroine searches for the meaning of faith and all it entails, she discovers a horrifying secret: all religions are inherently bogus. At least, according to a Marilyn Manson lookalike who runs a business that helps individuals craft their very own custom-made religions. Convinced that embarking on such an endeavor will solve the butcher shop's financial problems, Agatha begins assembling the necessary components for her very own religion: Carnivorism. With the assistance of a magician named Sandro (I'm sorry, the AWESOME Sandro) and a grumbling deity known as the Great Bleeding Pig, the headstrong child sets out to rescue the family business while convincing animals that, yes, Carnivorism is a legitimate religion, one that can provide these adorable little creatures everlasting peace in the afterlife. 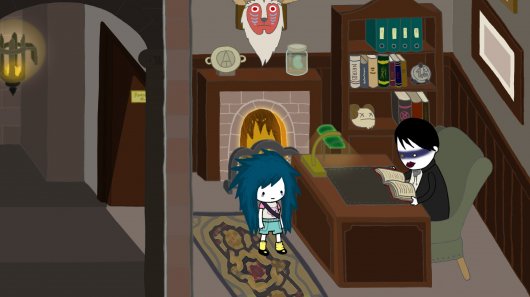 Animal lovers will no doubt have a very difficult time with Knife's love of meat, especially when she delves into the heartbreaking details of her grisly experiences with the edible critters. The very thought of a little girl singing songs to an animal as it bleeds out on the killing room floor is horrifying enough, but the game ups the ante by actually showing Agatha as she hacks through a distraught pig helplessly suspended over a drain in the butcher's abattoir. However, like South Park, it has more fun shining a light on hypocrisy than savagely butchering sacred cows. It's not nearly as nuanced or clever as Trey Parker and Matt Stone's long-running animated series, and some of the jokes occasionally fall flat, but there are several memorable moments when the writing shines.

A charming hand-drawn art style that's both rough around the edges and quite endearing complements Agatha Knife's solid script. Although the game delves into full-on gore at times, it is still cutesy enough to avoid being outright grotesque. Agatha herself quickly grows on you, with her sunken eyes and messy blue hair, although she frequently comes across like a petulant child who desperately needs a swift kick in the backside followed by extensive therapy. To her credit, Knife never falters in her convictions, and she's quick to educate those who prefer to buy cheap, questionable meat at the local supermarket than to support the local butcher shop, which provides its customers with superior albeit pricier wares. Still, sometimes Agatha has a tendency to grate the nerves – but she's seven years old, so that probably just comes with the territory. Sadly, the rest of the characters only serve to drive the story and set up jokes, nothing more.

Unfortunately for players accustomed to full voice acting, even in smaller indie titles, Agatha Knife sports text-only dialogue. This means you'll spend a lot of time reading conversations that often ramble on longer than necessary while listening to an innocuous score that's disappointingly underwhelming. Truth be told, I frequently played Agatha Knife with the sound turned off, simply because I didn't care very much for the ambient synth music or the random sound effects that add very little to the overall experience. The score and sound design do have their merits, but if you have something else more engaging playing in the background and the sound turned off, it's doubtful you'll notice the game's on mute. 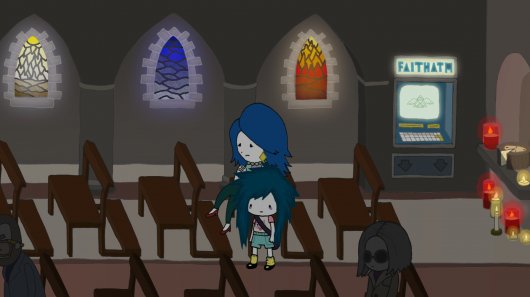 Navigating Agatha Knife doesn't take a lot of effort. The left mouse button will bring up a handful of contextual commands with a single click, though the lack of smart cursor or hotspot labels means you’ll need to click on everything to see if it’s something you can use or talk to. Beyond that, the interface is pretty straightforward. Need to access your inventory, save your game, or return to the main menu? Simply click the protagonist’s head. Although it took me a few minutes to figure out how items work – you "activate" the item in your inventory by clicking on it, exit the inventory screen, then click on whatever you want to use the object on – it works pretty well once you get the hang of it. It's a little clunky at first, but before long it becomes second nature. However, returning to the inventory screen whenever you use an item with the wrong thing can become a bit of a hassle.

If a game ever needed an overworld map, it's definitely this one. Instead of allowing you to fast-travel to the various locations sprinkled around Agatha's hometown, you're forced to traverse from one end of the neighborhood to another on foot, which quickly becomes a repetitive bore. Quite a bit of time is spent backtracking, revisiting characters and places that might offer up some assistance with your current objective. Although the Awesome Sandro gladly teleports Agatha to the butcher shop, that's simply not enough when you have to trek back and forth between people, places, and things located on opposite ends of the town. Sure, a quick double-click will send Knife into a full-on sprint, but a map would have considerably helped the game's pacing problems.

As far as puzzle-solving goes, it's pretty basic stuff. Need an outfit altered? Head to the clothing store. Want a book? Off to the library. If you pay attention to what the numerous characters have to say, you'll rarely find yourself thrust into a situation that's completely confusing. What's more, Agatha tends to tell you where you need to go after she's discussed the details of a particular quest with the Awesome Sandro. For instance, after learning she needs a meeting space for her new religion, Agatha informs you that speaking with her mom is the next course of action. While nudges aren't necessarily a bad thing, blatantly pointing players in the right direction seems to rob the game of any challenge. Figuring out where to hold these religious meetings could have been fun, but instead you're shown precisely where you need to go next. Unfortunately, this isn't an isolated incident. 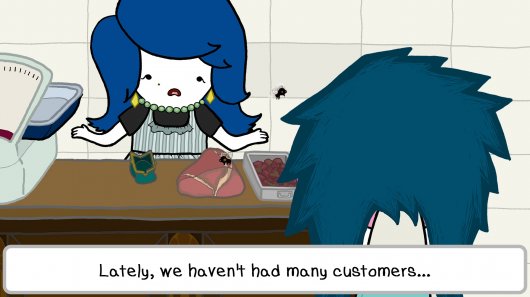 Ironically, the game's most frustrating puzzle is due to an overall lack of guidance. After learning that a particular item you received doesn't actually contain anything at all, you're left to figure out how to solve that problem on your own. The solution is so ridiculously obscure when compared to the other challenges that I began to think I was completely overthinking the solution or had missed some important information that would aid me in this particular quest. After failing to solve the puzzle on my own, in sheer frustration I headed to the nearest walkthrough, where I discovered that the convoluted and deeply frustrating solution had seemingly eluded me through no fault of my own, and I doubt I'd have ever stumbled onto the correct sequence without help. Other players have presumably solved this one on their own, of course, but its difficulty stands in sharp contrast to the simple nature of the game's other, more casual-friendly puzzles.

As much as I wanted to enjoy this title, I couldn't get past Agatha Knife's many irksome issues, which quickly added up over the eight hours I spent with it. Although it charmed me with its adorable artwork and solid writing, the inexcusable amount of backtracking, (largely) simplistic puzzles and practically non-existent sound design derailed most of the fun I'd squeezed out of the game. I applaud Mango Protocol for tackling subjects that you don't usually encounter in point-and-click adventures, and I genuinely laughed out loud at some of Agatha's musings on religion, animal rights, and consumerism. Sadly, these moments of amusement lack strong gameplay elements to support them. It may still be worth a playthrough if you're into irreverent humor, smart-mouthed seven-year-olds and meat, but it's doubtful that you'll want to revisit the experience once you've introduced your flock to the Great Bleeding Pig in the sky.

Agatha Knife is available at:

Although Agatha Knife boasts strong writing and eye-catching artwork, its design problems ultimately crush much of the fun prospective players are likely to find.

GAME INFO Agatha Knife is an adventure game by Mango Protocol released in 2017 for Linux, Mac, PC, Switch and Xbox One. It has a Stylized art style, presented in 2D or 2.5D and is played in a Third-Person perspective.

What our readers think of Agatha Knife